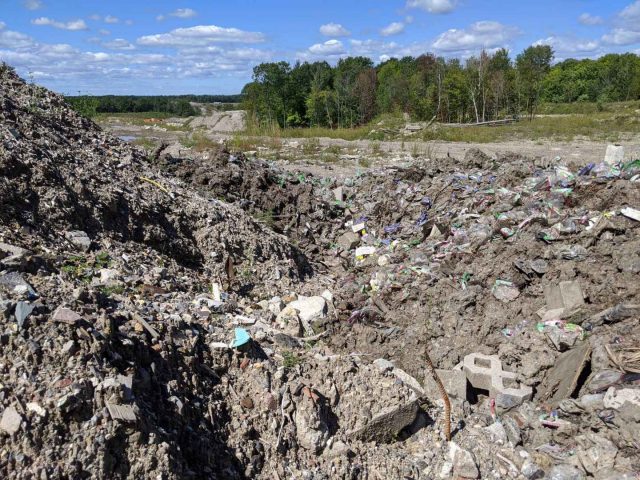 “The recommendations are just band-aid solutions,” said Tracy Cross, referring to the mitigation options proposed to address the nauseating odours emitting from the recycling site in Kanesatake. “We cannot and will not stand by government officials any longer as our health deteriorates.”

Cross was among the Kanehsata’kehró:non who attended a meeting held behind closed doors on Monday, December 16, with representatives of Golders Associates who presented the findings of an air quality study report for the G&R Recycling site.

The document released exclusively to community members who made the request to obtain it provided the results of an ambient air quality assessment conducted at the centre in March 2021.

“What I got out of this presentation was that the problem isn’t going to be fixed,” added the community member, who has been actively pushing grassroots efforts to have governments remediate the contaminated site.

“Instead, they’re going to mitigate it by putting in recommendations to prevent amounts of H2S (hydrogen sulphide) concentrations and prevent screen readings above 30 ppb – which (right now) are exceeding the targeted action threshold.”

While access to the meeting held in-person and on Zoom was limited to Kanehsata’kehró:non upon proof of an Indian Status card, concerned community members provided The Eastern Door with recordings of the meetings.

When asked about the decision to not allow local media to be present, Mohawk Council of Kanesatake (MCK) grand chief Victor Akwirente Bonspille stated wanting to provide members with the space to comment and ask questions as needed.

“We wanted to keep it for community members and for those affected directly,” said Bonspille, adding that he will suggest that the media be invited to another meeting in the new year. A date has not yet been fixed for this second presentation of the report.

Meanwhile, residents from neighbouring municipalities who reside in close proximity to the G&R site were also not allowed to attend the presentation or to receive access to the air quality study report being discussed.

On Monday, the presentation and subsequent question period were carried out by Golders associate and Water Treatment Team leader Eric Bergeron.

When pressed about why the study was conducted in March, a period of the year where seasonal conditions are not favourable to providing the most significant H2S concentrations emitted at the site, Bergeron stated that this was out of the firm’s control.

“It’s not ideal conditions, but we did what we could,” said Golders associate. “When we had the project, it was at the beginning of March, and it needed to be completed by the end (of the month).”

In the report obtained by The Eastern Door, it stated that the H2S concentration for the ambient air monitoring varied between 0 and 17 parts per billion (ppb) – falling below the selected action threshold of 30 ppb established by the Quebec Regional Public Health Department.

While many community members pressed Bergeron about whether results obtained during the air quality study and the previous site characterization showed findings that represented potential health hazards, he explained that a toxicologist would need to review the results in order to make a conclusive statement.

Nonetheless, Bergeron raised some points that corroborated the statements of experts consulted by The Eastern Door in previous reports published on the matter.

“If you speak about H2S, the concentrations we measured were below 30 ppb, but if you look at the sediment, the soil, the groundwater – (then) a lot of parameters like metals are over the regulated limit, so they will need to be addressed,” he said, adding that this should not be a direct concern for those who do not drink tap water supplied by groundwater systems.

Moreover, when an anonymous community member asked whether there is a possibility that “people may be getting sick” from the contamination permeating at the site, Bergeron answered that it was indeed a possibility.

On multiple occasions throughout the meetings, Bergeron requested that attention be brought back to the odour mitigation recommendations provided by Golders as part of their contract.

“I think most people walked away thinking these were bandaid solutions – they might be right, but Council and our environment department are working hard to fix the issue in a concrete way,” said MCK’s grand chief. “Because it’s winter right now we can’t do much, but come the springtime, we can really start working on this.”

In his plea to bring about a tangible remedial plan, Bonspille asserted that provincial and federal governments have a responsibility to provide the multi-million dollar funding necessary to decontaminate the site.

“They’re the ones who gave the permits, gave the go-ahead for the site and who then closed it,” he said. “They have a moral and fiducial obligation to remedy this by working with us.”

With mounting pressure at the community and national level, Kanehsata’kehró:non continue to
urge for immediate measures.

“It’s time for serious commitment by all government levels to find a solution and take real action to combat this serious problem affecting not only Kanesatake but the surrounding municipalities, which should also have also been part of this presentation,” said Cross.

“Right now, they just want to put recommendations into containing (the problem) so that the Indians don’t smell it anymore – that’s all they want to do.”