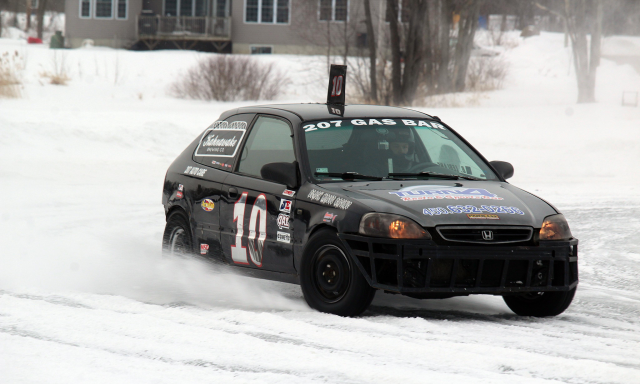 Last year, the frozen-over bay at the Kahnawake Marina was dotted with 100 shacks for ice fishing, a quiet activity that brings to mind contemplation and serenity.

The shacks will be back this winter, but things are about to get a lot louder at the marina.

The Kahnawake Marina Super Series (KMSS), a local mainstay that sees cars roar across the ice at speeds up to 120 KM/H, will return in January after it was absent last winter due to COVID-19.

The first race is tentatively scheduled for January 8 at around noon, provided the ice is at least 16-18 inches thick by then.

“I hope the community can get away from home and enjoy some good, old-fashioned ice racing,” said Bryant Montour-Leblanc, commissioner of the KMSS.

“It’s safe to do. You can stay in your car and watch from the island or go into the marina and have a drink and watch.”

The races have cash prizes for the top three finishers of each race. There is also a points system based on NASCAR. Drivers accumulate points over the season, which lasts as long as the ice remains thick enough for racing.

The races are divided by the class of the vehicle. Montour-Leblanc recalls his first victory, in 2018. He had been competing in the front-wheel-drive rubber class with a 2003 Chevrolet Cavalier.

“The feeling of winning was very rewarding because, for the past two years that I’d been racing prior to my first win, I was trying to figure out how everybody else was going so fast, through means of trial and error,” he said.

If you include fans and ice fishers, sometimes as many as 100 cars have been on the ice in one day, according to the executive officer of the marina, Landen Goodleaf. The marina is responsible for keeping the access ramps and track clear of snow, but it earns some revenue through its association with the series.

Goodleaf himself is a veteran ice racer. “I’ve done well some years, some years not so great,” he said.

He still hasn’t decided whether he will be participating this season.

“I’m kind of getting older to be changing tires in 30 below zero,” said Goodleaf. “I like to sit in my ice shack and burn wood and catch fish. And watch the races now.”

Other veteran racers, such as Derek White, are raring to get back on the ice.

“Last year, I had my car out just doing testing, so that was a lot of fun,” said White, who is part of KMSS. “There was nothing else to do during the wintertime.”

Montour-Leblanc emphasizes that safety is a high priority for the KMSS. He said there have been only minor crashes since he became commissioner in 2020, including going into snowbanks and bumping into other cars. Intentional bumps are strictly forbidden.

“We really do emphasize the rule book, which ensures that everybody sets their vehicles up for the safety of others and their own,” said Montour-Leblanc.

Each event is preceded by a safety meeting to make sure drivers are all on the same page, according to Montour-Leblanc.

Those interested in racing can register the morning of the race, but KMSS will try to arrange for new drivers to get some practice before race day.

Races are free to attend for spectators.