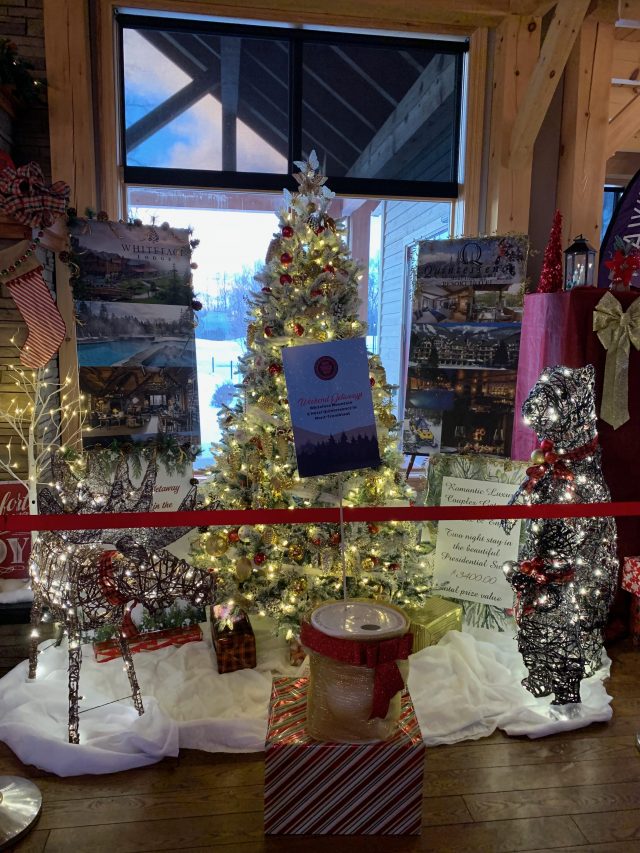 The seventh annual fundraiser was hosted at La Vista restaurant by the Kateri Memorial Foundation (KMF), which streamed the draw live on its Facebook page to hundreds of viewers. Jeremy White of The
Beat 92.5 and K103.7’s Dennen Phillips co-hosted the stream.

The event reportedly grossed a record-setting $123,757 for a variety of causes, including scholarships and addiction programs. The foundation still needs to weigh that against expenses to determine the final amount.

At stake were 13 Christmas trees donated by the community and the piles of gifts beneath them, not to mention half the money kicked into the 50/50 draw. Community members and others had from November 27 to December 5 to see the trees and buy their sheets of tickets for the raffle.

“Everything went well, and I’m very happy with the results, with the community support, and I really think it was a success,” said Carla Skye-Delisle, co-founder of the event and president of KMF’s board of directors.

The event is named for the daughter of Skye-Delisle and Iohahiio Delisle, Karonhiaráhstha Delisle, who was lost to sudden infant death syndrome in 2013.

Each year, the final tree is named for Karonhiaráhstha and put together by her family.

“It means a lot to the family,” said Skye-Delisle. “It’s become a part of healing. Every year, that’s how we heal together.”

This year, Karonhiaráhstha’s tree and gifts were Barbie-themed. The package was won by Anna-Mae Rice.

“I was very happy to win,” said Rice. “I have always participated in many community raffles and fundraisers, but rarely win.”

She plans to give the gifts to her granddaughter, who will be four years old in January, on Christmas and her birthday.

“One of her favourite sayings is ‘fabulous,’ and I’m sure that’s exactly what she’s going to say when she sees them,” said Rice.

Rice’s own family has also had a memorial tree at past Winter Wonderland events. Theirs honours the memory of Rice’s husband Wayne Rice and his sister Janice Two-Axe. The siblings died six weeks apart in 2015.

The family didn’t have their tool-themed tree at this year’s event as they assumed it would not be moving forward, but they will be there next year, Rice said.

Last year, a 12 Days of Christmas raffle ran in place of the usual event due to the pandemic.

This year’s return to the classic formula elicited enthusiasm in the community. Most of this year’s winners came the same day to pick up their trees and gifts, according to Skye-Delisle.

“They were very, very, very excited because they ran there right away,” she said. “They couldn’t wait till the next day.”

Skye-Delisle has already turned her mind to next year’s event, and she said she’s not the only one.

“It’s not even over and disassembled yet, and I already have people talking about next year,” she said.