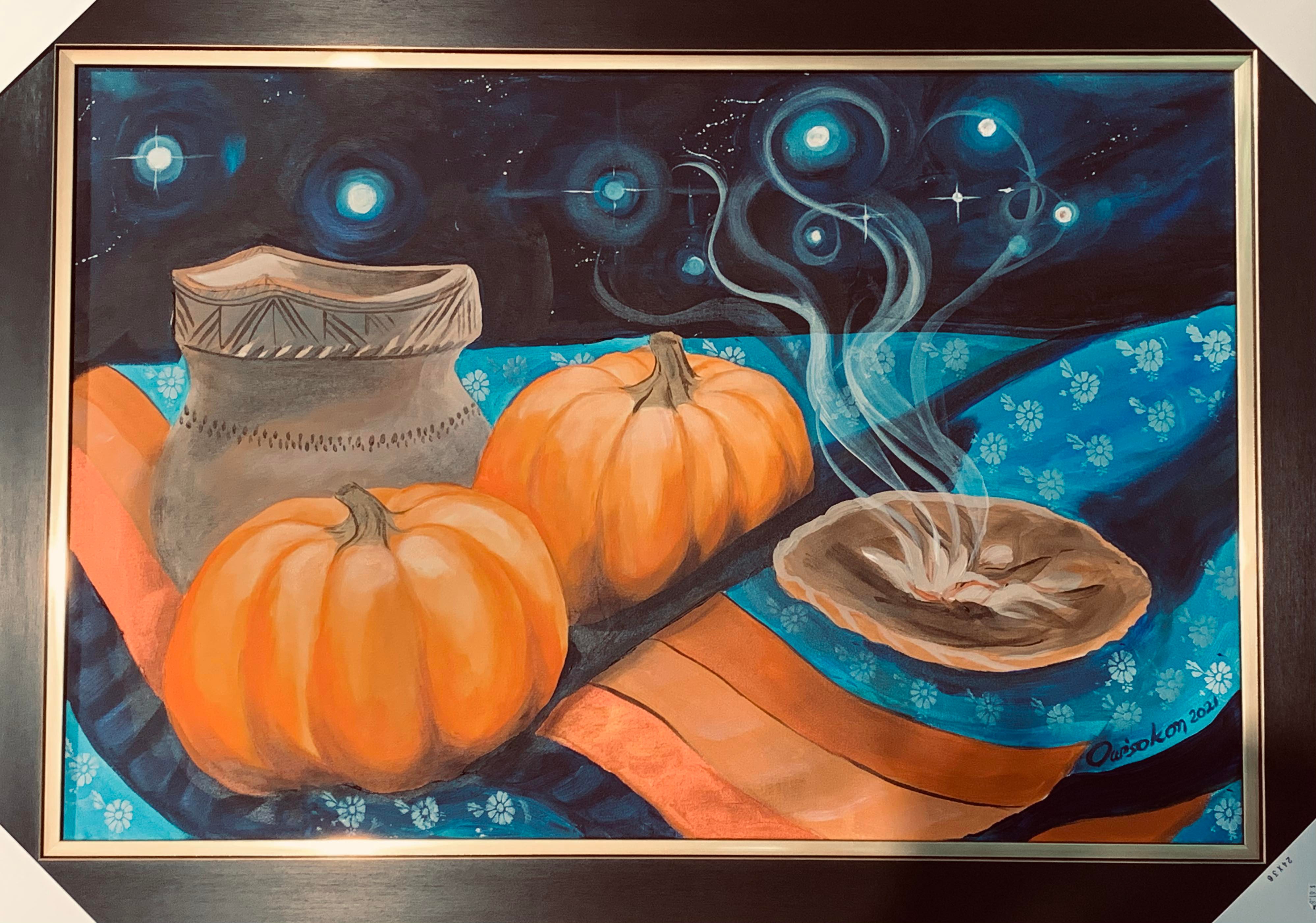 “I thought to myself, failure is not an option,” said artist Owisokon Lahache. Not on stage, in front of so many people.

She had been preparing for this moment, drafting sketches, photographing objects she would like to paint to get an idea of how to size them out on her canvas. She couldn’t waste a single moment hesitating, not with just two hours to paint a 24-inch by 36-inch canvas.

Behind her, as she painted away, was the Indigenous Tourism Quebec Recognition Gala, held in the context of the first-ever Grand Economic Circle of Indigenous People and Quebec.

Lahache had been selected to paint an artwork onstage in just two hours to be auctioned off on the spot upon completion. The funds from the auction went to New Pathways to help keep Onkwehón:we youth connected to traditional cultures.

It was Kimberly Cross of Kahnawake Tourism who put Lahache’s name forward for this event.

“When Indigenous Tourism Quebec was planning to do a gala, they reached out to me seeing as Kahnawake is the closest to Montreal,” Cross explained. “They were looking for artists who could do that sort of activity. And so I had recommended Owisokon, and she accepted.”

Cross recently joined the board of directors of Indigenous Tourism Quebec, but wasn’t around for the planning of the gala. She went as an attendee along with executive director of Tewatohnhi’saktha Neil McComber, and Mohawk Council of Kahnawake grand chief Kahsennenhawe Sky-Deer.

“I had no idea how many people would be there until I actually arrived on site, and I had not realized that it would also be recorded and televised live,” said Lahache, which added to her nervousness.

At the 45-minute mark, the gala’s host asked Lahache to step back from the painting for a moment to show the audience.

She had been so busy painting, she didn’t see the time fly by. The pumpkins and clay pots were on the canvas, but without definition: they just looked like flat paper cutouts at that point.

“‘Oh no! I’m going to be so embarrassed if I don’t finish,’” she recalled thinking. “If it was at all possible, I had to make the brush paint quicker and quicker.”

She painted the ribbon skirt. The host asked her to step back again: an hour and 15 minutes had passed.

“As quickly as I could I started the background, looked at my time and quickened my pace,” she said. “It was a blur.”

She began adding detail when she heard the bidding starting in the background.

“I was not close to finishing. Even though I didn’t think it was possible I painted quicker, not worried about refining the image as much as completing it, and hoping that it would be beautiful.”

The host announced that the auction would close in five minutes. In her nervousness she raised up her finger telling him to wait, drawing a laugh from him and the crowd.

Right in the nick of time, she put her brushes down and popped the painting into the frame.

“I turned around and bowed to the crowd and with a wave of my hand, presented the artwork,” she said. “Everyone applauded in appreciation and I was finally able to relax a bit.”

The painting was auctioned off to a man from Quebec City for about $1,800. When he thanked Lahache for her work he told her it would be displayed at his office in a public space. New Pathways, the group that received the funds from the auction, also thanked Lahache personally.

Lahache said the event is not one she will soon forget: “What an awesome experience!”

Relatives across the ocean visit Kahnawake to share stories

Mohawks and mohawks at ’77 Montreal festival

Want to know if the gold is real? Take a bite