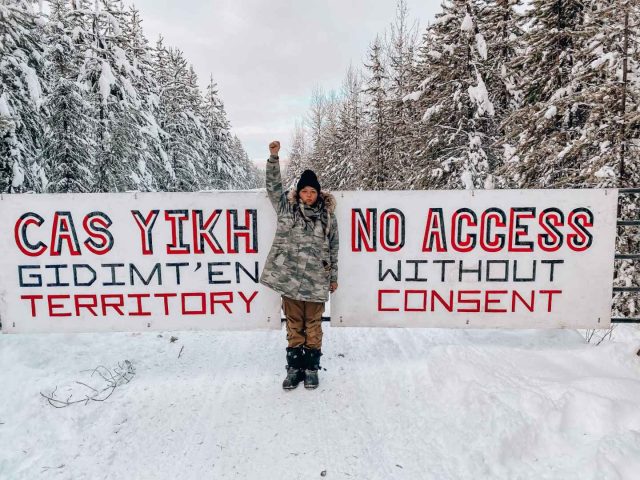 On the morning of November 18, helicopters were whipping the air above the Gidimt’en checkpoint in Wet’suwet’en territory.

Given the history of the Wet’suwet’en struggle against the encroachment of the Coastal GasLink (CGL) oil pipeline, it was an ominous sight for the land defenders below.

There was a feeling about what could happen next, said Layla Staats, a Kanien’kehá:ka documentary filmmaker from Six Nations who had travelled to northern BC to tell the story of the Wedzin Kwa river at which they were camped.

They knew it could happen, and then it did.

The RCMP moved in to enforce an injunction, raiding the blockade at the 44-KM mark of the Morice Forest Service Road.

“That moment of standing on a bridge with assault rifles and barking crazy dogs and 100 RCMP, and they’re marching towards you: there’s so much fear in those moments,” she said.

She remembers Wet’suwet’en elder Auntie Janet grabbing her hand when the dogs started barking – the elder told her they were going to the front, where the boys were.

“This is a 70-year-old woman with a walking cane trying to get over a bulldozed bridge,” said Staats. “I held her hand the whole time and protected her. When the police were coming in and breaking through the lines, we all just hugged her and wrapped our arms around her.”

She told herself to be careful, that she was in danger. She made sure her hands didn’t wander into her pockets. She was afraid.

She saw the police point out her friend, fellow Kanien’kehá:ka Skyler Williams, known as the spokesperson for 1492 Land Back Lane.

She saw her brother, Logan Staats, pulled by his braids, his face smashed into the ground.

“It took everything in me not to be a big sister and want to go charging, but I knew it was a dangerous situation, and I could be hurt if I showed aggression, if I raised a fist,” she said. “I just kept the peace. I kept singing.”

Staats’s brother and Williams were arrested, and when the police peeled her from the others, Staats was arrested, too.

“When they finally broke me off, I said ‘Take me. I’m not leaving this territory, so you’re going
to have to remove me.’ That’s when they put me in the back of a cop car in handcuffs,” she said.

Fourteen land defenders were arrested that day; Staats later learned one girl evaded capture by spending the day hiding in an outhouse.

The Staats siblings and Williams spent the night at an RCMP detachment in Smithers, BC. They were charged with civil contempt for breaching the injunction.

“We were transferred to the courthouse, where we were paraded through open court in our underwear, shackled from our ankles to our wrists, and brought out for a bail hearing,” said Williams.

“Out of all of it, that was probably the most degrading.”

He compared the SUV that transported them to the courthouse to a dog kennel.

“To be treated, I would say, like animals – degraded – for me it just felt like this is not right,” said Staats.

“This cannot be right, to be paraded around in your underwear with ankles shackled and wrists shackled,” she continued.

“I’ve never been in trouble with the law in my life. I’m not an angry or violent person. But then to have the three Haudenosaunee that were out there bound in that way in court, was really to me, it really got my blood boiling.”

The same day they were in court, November 19, the RCMP raided the Coyote Camp and arrested 15 more people, for a total of 29. Two journalists were held in custody for three days despite announcing themselves at the time of their arrest – not soon enough, according to the RCMP.

The raids were just the latest in a nearly three-year saga as CGL, owned by TC Energy, has pressed on with its plans to build an oil pipeline to service global markets. The pipeline is set to run through Wet’suwet’en territory, despite the refusal of the Wet’suwet’en Nation’s hereditary chiefs to allow it.

The RCMP portrayed the raid on Gidimt’en checkpoint as a rescue operation for CGL workers supposedly stranded behind the blockade.

On November 14, the Wet’suwet’en Gidimt’en Clan had issued an eviction order to CGL and gave workers an eight-hour window to evacuate, plus a two-hour extension, though few did.

Asked whether workers were made aware of the evacuation, TC Energy simply referred The Eastern Door to its website, adding the claim that it has unprecedented support from Indigenous
communities.

Madonna Saunderson, a BC RCMP spokesperson, refused to confirm how many officers were involved in the raid, citing operational reasons. She said RCMP efforts to avoid police enforcement were unsuccessful.

Asked whether the RCMP has any regrets about its enforcement approach, she quoted RCMP chief superintendent John Brewer about the necessity of the intervention, adding, “Orders and injunctions from the Supreme Court of British Columbia are not optional invitations or suggestions for the parties and the police,” she said.

She said the RCMP’s division liaison team and enforcement team are well-versed in Indigenous relations and communities, adding they have “benefitted from locally-developed and delivered cultural awareness training prior to any enforcement.”

“I feel that this is now setting a precedent with the whole of Canada with Indigenous Peoples, exactly where we stand with industry and RCMP,” said Marlene Hale, a Wet’suwet’en elder, activist, chef, and educator. “We have been resilient, fighting.”

Hale has been involved in the fight against the CGL pipeline since the beginning.

“We’re all resilient, and this is not going to go away soon,” she said. She believes the government has learned nothing since the conflict began.

Protests and blockades have sprung up across the country, including here in Kahnawake. The Mohawk Council of Kahnawake and the Kanien’kehá:ka Nation at Kahnawake (Longhouse 207) have both officially condemned the RCMP’s actions.

“The Longhouse shall continue to support the Gidimt’en Clan of the Wet’suwet’en Nation in the defence of their territory,” read the latter’s statement.

Staats and Williams are back at Six Nations, having returned on Monday.

“It’s really hard, I guess, these moments after, starting to come down from all of the excitement of it all and the adrenaline of having this overwhelming force in front of you,” said Williams.

“It hits real hard right now. I’m finally laying down in my own bed for the first time in quite some time,” he said. “It’s a weird feeling for me, to feel like I need to be back in that line, holding it down for those future generations, holding the line for that water, similar to what we did here over the last year-and-a-half at
Land Back Lane.”

On Monday, Williams planned to get some sleep and then spend time with his four kids.

He was uplifted to see rallies supporting the land defenders. “It’s nice to be able to see when you get out of jail that shit’s lighting up everywhere,” he said. “That bit of the story is something that really hits home for a lot of us, to know that solidarity is feeding this.”

He will definitely be returning to rejoin the Wet’suwet’en Nation in their fight, he said. “An attack on one of our nations is an attack on all of our nations. If we’re not willing to stand up for each other, there are no wins that are possible.”

Staats, for her part, is left with feelings of anxiety and reflections about why the raid was executed as it was. On her way home on Monday, there was a rally in Caledonia in support of the Wet’suwet’en. She drove in the rolling blockade, and police were following behind – ostensibly to ensure safety.

“There was police at the rally, and it kind of triggered me back into this fear mode that I felt standing on that bridge on that front line looking at this powerhouse of opposition against me, against us, all of us,” she said.

“I was like, this is intentional. This trauma has been created in me where I have this response to police and armed forces, and I felt that.”

Although she believes creating fear is something colonial systems have perfected, she still remembers the feeling of unity she felt at the checkpoint when police bore down on land defenders.

“If you focus on that unity, the reason that we’re doing it, that reason we’re creating that space for Indigneous Peoples’ voices to matter and to mean something and to be heard, then you stand tall,”
she said. “You don’t back down.”