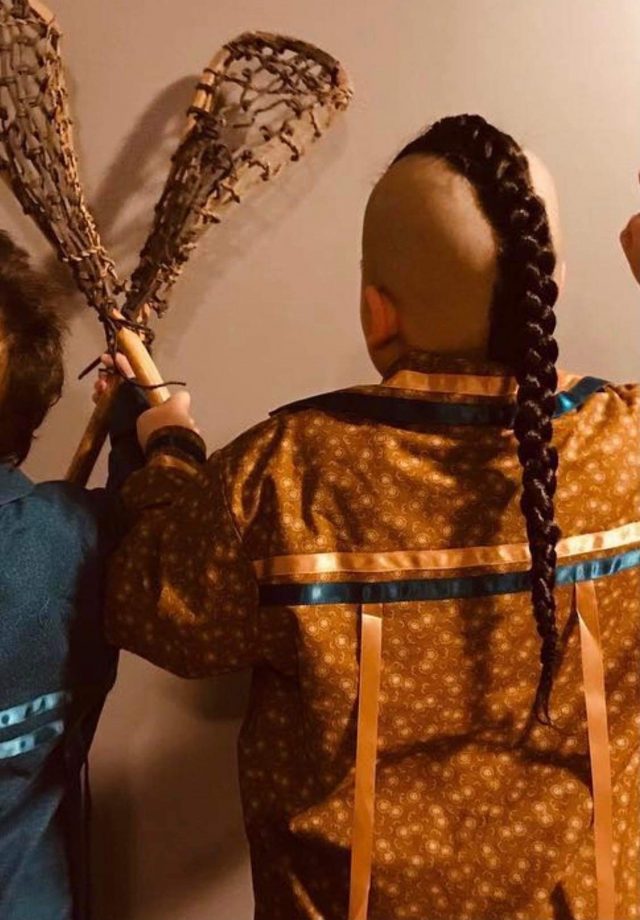 Community member Tsyoyunthu Adriana Poulette and her two boys Tharahkwisere Stacey, 11, and Tahaniehtatihentho Stacey, 9, were so excited when they heard that the boys had been cast in a mini-series.

It was the first such experience for both boys, said Poulette. The mini-series is about residential schools, and it is currently being filmed in Gatineau.

“About two weeks ago, we were told that they were both offered a role in a mini-series. And then they called us and asked us to come to a fitting before the first day of filming,” said Poulette, who is originally from Oneida.

The trio headed to the fitting, and both boys got to try out their wardrobes. Next, they were told they needed to head to hair and makeup.

“We kind of all looked at each other – because we are not very familiar with sets, we were doing this for fun,” she said.

“And then they told us that both boys would need to cut their hair. It wasn’t a big deal to my other son (Tahaniehtatihentho) since his hair was already short, but Tharahkwisere said that he didn’t want to cut his hair.”

The crew explained that Tharahkwisere needed to have short hair for the role since all of the boys in residential schools had short hair.

“We told them that we were aware, but that we were not told that he would have to cut his hair,” said Poulette.

“Since they cast him, I figured it was a scene that took place maybe before the kids were sent to school. That is what we assumed because we weren’t told what their roles were, just that they were cast in this mini-series,” said the mom.

But the young boy held his ground and said no again, at which point the production told them that they would have to recast him.

“I felt disappointed. It took six years to grow my hair. My hair means a lot to me,” said Tharahkwisere.

“Not a lot of people have the patience to go through years of just growing hair and having hair problems. It is now a part of who I am. I grew my hair to feel connected to the Creator.”

After seeing how disappointed her boy was, Paulette asked the crew if they could use a wig or another alternative since Tahaniehtatihentho was still going to be part of the mini-series.

“They said no, that it was going to be too obvious, and they wanted it to be realistic. So, they came back and asked him again whether he would consider cutting his hair, and he refused again,” she explained.

The production’s insistence on having Tharahkwisere cut his hair after having said no multiple times angered Paulette. She felt that there was a lack of sensitivity with the way they were handling the situation, especially given the subject matter.

“I told them to re-cast him and that it was enough insisting. It was upsetting. He was upset, but we held it together because his brother was still in the mini-series,” she said.

“We kind of let it go, but it bothered me for a couple of days and then finally I decided to speak up.”

The mom ended up talking to a producer who apologized for what had happened and offered Tharahkwisere a sort of apprenticeship behind the scenes of the production.

“So, we were happy about that, and I talked to Tharahkwisere, and he wanted to do it. For every day that his brother was on set, he came back and did tasks behind the scenes.

“It made me feel really good that they tried to right this wrong that had happened. The most important thing is that I am proud of him for what he did, and it speaks to him and his community and beliefs,” she said.