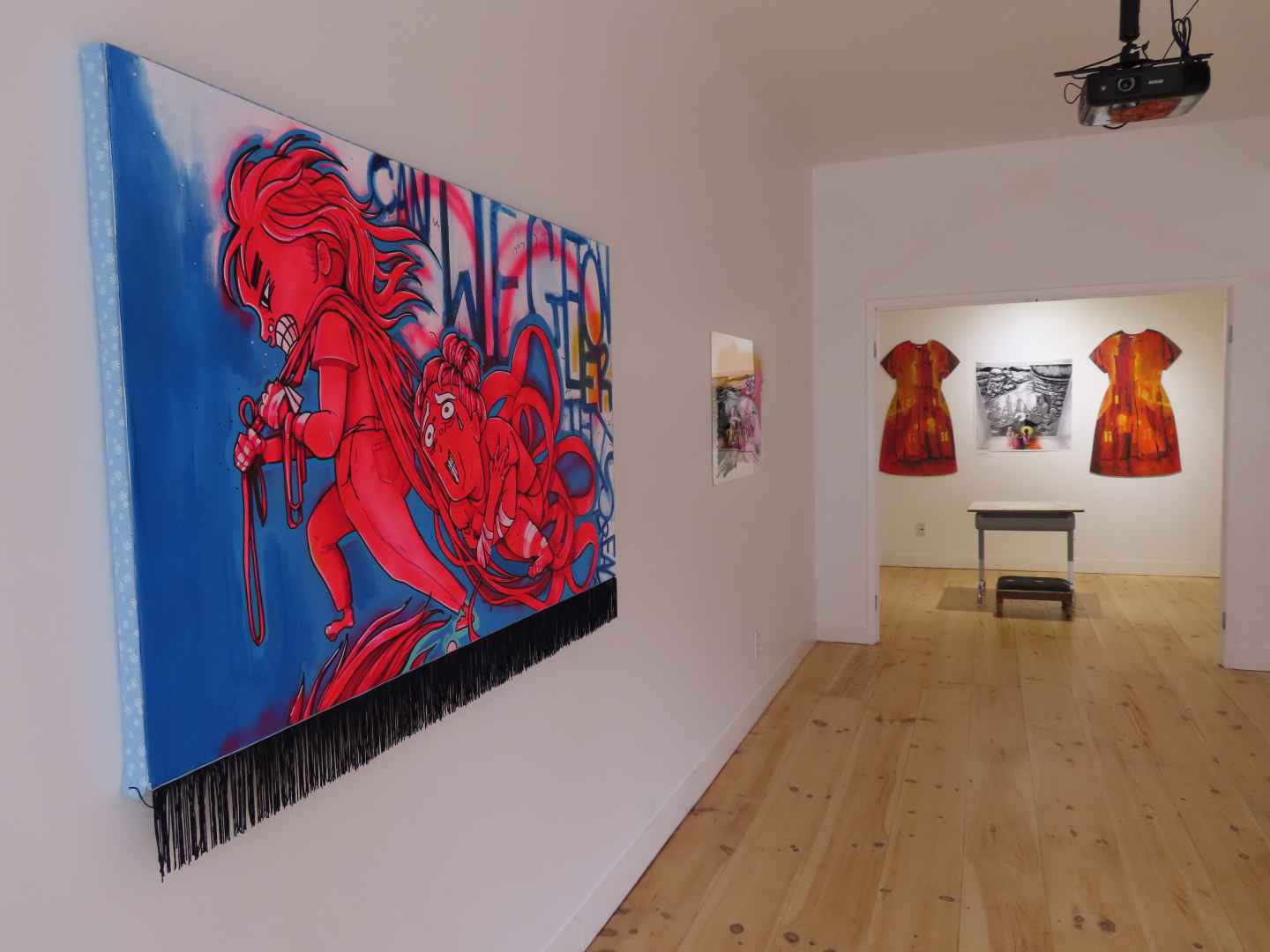 For a soft-spoken artist, Kaia’tanó:ron Dumoulin Bush’s art has a lot to say.

With bright, bold colours and a canvas chock-full of action and movement, the Kanien’kehá:ka and French artist’s work has a message to deliver. And from now until December 18, that message is on display at Montreal’s Indigenous artist-run centre, daphne.

“I would say there’s a pretty heavy political vein to the show,” said Bush. “I think doing that kind of work is very important, expressing my displeasure with the current Liberal government and their blatant disregard for any kind of decorum.”

“I have fibromyalgia, so that’s a big part of why I have this art process and sketchbook process,” she said. “It allows me to put my anxieties and my thoughts and fears into one place and keep track of them.”

The exhibit very much grew out of her sketches in her sketchbooks dating back to 2013. In the exhibit space at daphne, the sketchbooks are laid out in the centre of the room, with the art displayed on the walls surrounding.

Last Saturday, October 30, daphne held a vernissage for the show. About 25 people were in attendance, and the event began with the Haudenosaunee thanksgiving address. Attendees then heard from Bush, the show’s curator Sherry Farrell-Racette, and daphne’s artistic director Lori Beavis about the artwork being presented.

“While everyone was beading, Kaia always had a sketchbook in front of her,” she said. “For someone so quiet, her work says so much.”

“Lori proposed to me that Sherry be my curator, and I was absolutely thrilled. Back at OCAD, my colleagues and I were quite in awe of Sherry and all her practices and knowledge, so it was really amazing to find out that she’d be my curator.”

She said working with Farrell-Racette on the exhibit was a great experience.

“For the brochure for the show, she described my work as ‘profoundly unromantic.’ I thought that was such a huge compliment. I love that so much. I’d love to get that on a t-shirt,” Bush laughed. “It was so great for me to know that someone who I look up to, one of my heroes, understands my work in the way that I intend for it to be understood.”

Bush previously created original artwork for the CBC podcast “Telling Our Twisted Histories,” which was announced in September.

She noted that she doesn’t avoid topics that might be sensitive or difficult for some. “Some of the art deals with kind of heavily religious topics, and some of it can be viewed as anti-Catholic. I don’t shy away from that.”

To Bush, it comes from a place of speaking out against systems that have caused pain, “the idea of revenge, or being able to kind of strike back at the systems that oppress you.”

In the end, it’s about having an avenue to make a statement, to call out what’s wrong in the world.

Through her sketchbooks, Bush was reacting to the world around her, chattering with herself about the goings-on. And with Iakoteriwatié:ni | Moulin à paroles | Chatterbox, she’s sharing that chatter with the world.

Her show runs until December 18.

Round the world and back the imagineNATIVE way