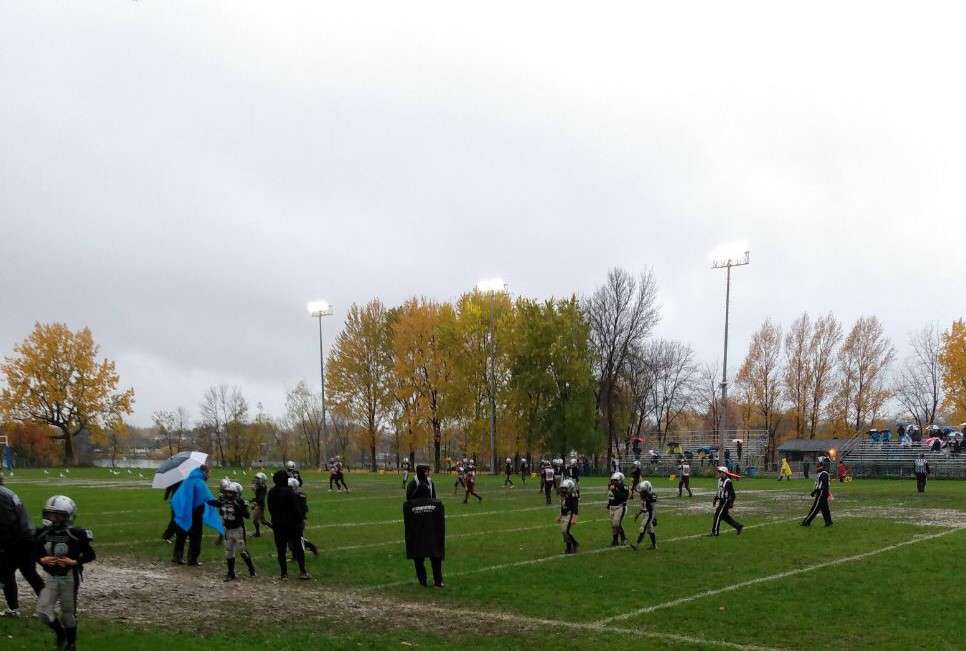 After a muddy victory, the Chateauguay Raiders’ Mosquito team is heading to the championship game this weekend.

“It started off scary,” said head coach Kevin Wyeth of the semi-final, which took place on Halloween.

After a good kick-off return, the St. Lazare Stallions scored a touchdown on their first drive of the game. The score held for about a quarter until the Raiders answered, notching the extra point to bring the score to 7-6.

With 11 seconds left in the first half, the Raiders earned a little breathing room with a 50-yard touchdown. After that, they spent the rest of the contest building their cushion.

“Our defence was lights out again,” said Wyeth.

The Raiders finished with a 33-6 win on an all-around effort. Kahnawa’kehró:non fullback Aiden Davis contributed two touchdowns, one from 11 yards out and the other on a one-yard plunge.

“After the first half, they just took over,” said Jordan Norton, parent of Raianahsnó:re (Gary) Norton.

“They dominated everything. Defence, offence. It was another one of those games.”

Norton attributed the slow start to the pouring rain, a challenge not only for players but for their biggest fans, too. Some parents stayed dry in their vehicles, but many set up tents or sheltered under umbrellas around the field and in the bleachers.

“There actually were quite a few parents who decided to fight the elements!” said Sose Jacobs, father of Levi Jacobs. “It was still an electric atmosphere generated by this amazing team, who are very exciting to watch.”

The team marked Halloween after the game with candy and hot chocolate.

Things did not go as smoothly for the Bantam Raiders, who fought hard in their quarter-final match on October 29.

“It was a grind-out game,” said coach Corey Cook.

His team fell 30-17 to the LaSalle Warriors in a game that felt closer. From the vantage point of Raiders’ president Jim Petelle, there were just a few things that went wrong in the game that led
to the loss.

Petelle praised the team’s running, throwing, and kicking. “They had a good game,” he said. “It’s just; they didn’t win. It’s unfortunate.”

Kahnawa’kehró:non Bocephus Dailleboust had a highlight when he recovered a fumble for a turnover.

Looking back, Cook is happy with the improvement his team showed throughout the season.

“We were competitive in a lot of games, and that’s something we can be proud of,” he said.

The Mosquito Raiders head into their biggest game of the year against a fearsome foe, the undefeated Lakeshore Cougars. They vanquished the Raiders 27-0 in the first game of the season, the last time the two teams faced each other.

“They’ve basically been steamrolling every team all year long,” said Wyeth. However, his team has grown over the course of the year, and he believes if his players can put in an effort like they did on Halloween, they have a good shot at victory.

“If they can hold them to six points, it should be a win,” he said.

The championship game will take place at Stade Hébert in St. Leonard at 1 p.m. on Saturday, November 6, sandwiched between the Atom and Peewee championships. Entry is $5 per person per game, and proof of vaccination is required.

With the Bantam group eliminated, the Mosquitos are the Raiders’ last hope for a 2021 championship.

“It would be good to see all the smiles on their faces if they win this one,” said Wyeth.

McComber back in the cage tonight

Kirby kicks and lifts it at Athleticks homecoming