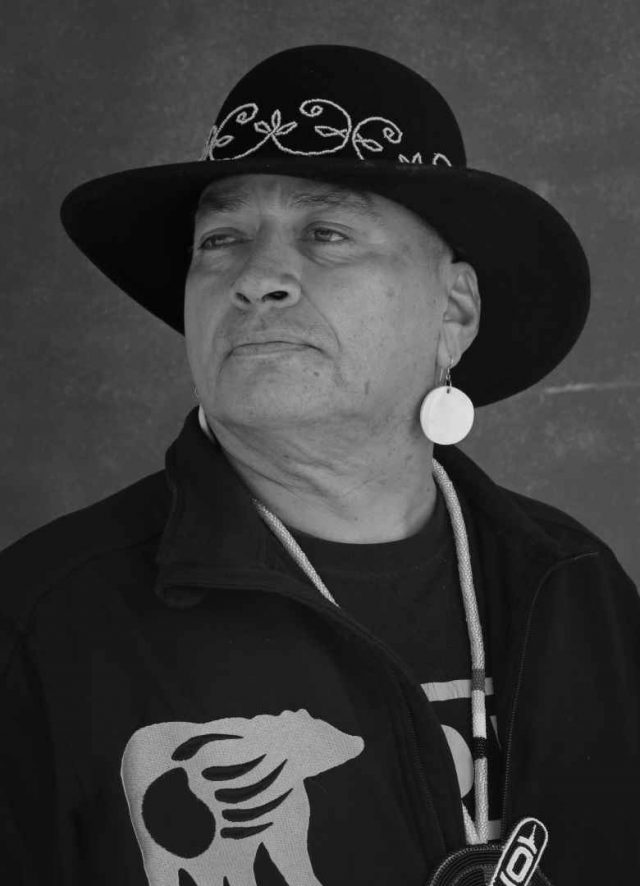 Photographer Martin Akwiranoron Loft’s portraits of Kahnawa’kehró:non will be displayed in the streets of Montreal as part of a photo project highlighting the forced displacement of Indigenous Peoples.

Indigenous Forced Displacement is a photo action organized through the international Inside Out Project, which is an initiative that encourages the use of photography to make political statements by displaying large-scale black and white portraits within communities.

Indigenous activist Nakuset of Montreal is leading the action, which will present portraits by photographers Craig Commanda and Vicki MacDonald, alongside Loft.

“The objective was to have a good representation of the community,” said Loft. “It’s a worthwhile project to represent Indigenous presence, strength and resilience in an urban environment.”

Loft set up shop in the parking lot of The Eastern Door on Saturday, October 23, taking 22 portraits for the initiative, with subjects ranging from four to 80 years old.

He explained that as an artist, his practice is usually to invest himself completely in one discipline at a time. Over the years, those disciplines have been photography, printmaking, and silver work.

Since spring of this year, Loft has been dedicating his time to black and white photography with success, seeing some recognition for his work.

“So when Nakuset recruited me for the Inside Out Project, I was pleased to volunteer and bring whatever expertise I could to the endeavour.”

Nakuset approached the three Indigenous photographers to take part in the project, and they established a vision for what it will look like. Each photographer took photos with an individual concept, and the photos will be posted in several locations around Montreal in groups of three.

“We’ll have to sort of mix and match them and paste them everywhere in Montreal to show that we are still here, despite smallpox blankets and all this systemic discrimination,” said Nakuset.

The theme, the forced displacement of Indigenous Peoples, draws attention to the ways Onkwehón:we were forced off their lands, relocated, and stripped of their culture.

“Everyone who is here in the city isn’t really from here. I’m from Saskatchewan, Vicki is from Manitoba, Craig is Algonquin. All the people that are being photographed are also displaced,” Nakuset explained.

She noted that although the Inside Out Project has over 4,000 actions from around the world, it does not have any other projects shining a spotlight on Indigenous issues in Canada besides their own.

A different Inside Out Project action has just been put

up in Montreal called The Faces of Montreal, which is meant to reflect the diversity of the city and a resurgence of hope after the pandemic.

“We have a real opportunity to show what’s going on here,” she said.

Nakuset said that taking the photos is the easy part of the project – now, they need to figure out where they will go up. Building owners will have to give permission for the portraits to be put up on their property, and Nakuset hopes to put them up in several locations rather than all together, so a lot of planning is involved.

But the result, she said, will be powerful.

“You can’t just sort of turn away and go along with your day and pretend like we don’t exist,” she said. “It’s going to be so obvious that we exist.”

The photos will be put up in four to six weeks.

“Montreal is often seen as devoid of Indigenous people, so we are reminding city dwellers that we are still here and we are not going anywhere,” said Loft.

Loft expressed his hope of using his photography to show the strength of Kahnawa’kehró:non.

“When a photograph works, it speaks without words and can reveal a soulful ethos of an individual,” he said.

“I hope the portraits convey the humanity and soul of our people to a Montreal public as well as international visitors.”