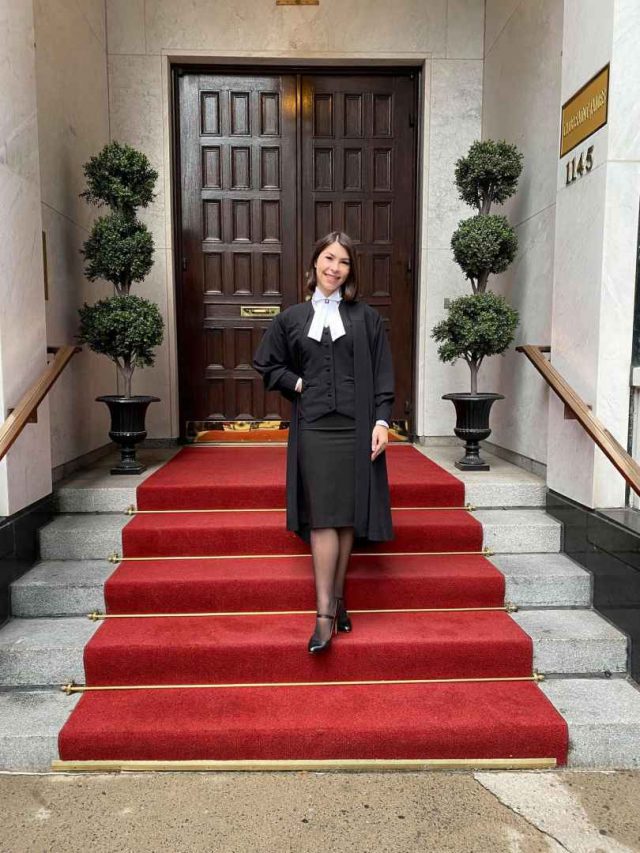 There’s a lot of homework involved in becoming a lawyer, but Joëlle Perron-Thibodeau, a Kanien’kehá:ka who grew up
spending weekends and summers in Kanesatake, decided to assign herself a little extra ahead of her swearing-in ceremony.

Every lawyer swears a standard declaration when they get called to the bar, but according to Perron-Thibodeau, this oath is directed at colonial institutions.

“It’s not why I went into law,” she said. So, she wrote an additional passage to recite at the October 13 swearing-in ceremony. It highlighted the institution’s responsibility to serve Indigenous justice.

Yet, while Perron-Thibodeau believed the Barreau de Montréal was working on allowing this, she was shocked to learn at her ceremony that she would not be allowed to recite her passage after all.

“It’s even the proof that we need changes, a goal I need to serve,” she said. “I will try to publish my words – my personal oath – and concretize it all my life.”

Indigenous people are underrepresented in the legal profession, and only about one percent of lawyers in Quebec identify as Indigenous, according to a study by the Canadian Centre for Diversity and Inclusion.

This didn’t stop Perron-Thibodeau from dreaming about entering the field since she was a child.

“It was a long journey,” she said. “I have difficulty putting my feelings into words because it’s the moment I’ve been waiting for since I was 10 years old.”

“She was always helping people,” said Josée Perron, her mother. “Always taking the defence of people who were bullied
and stuff like that.”

Perron said her daughter went to law school not for money or prestige, but to make change.

“All of my personal and professional goals surround Indigenous justice,” said Perron-Thibodeau. She currently works at Dionne Schulze, a law firm that mainly provides services to Indigenous clients.

Yet, she acknowledged that many Kanien’kehá:ka and people from other Indigenous communities are rightly skeptical of an institution of law that has been used to repress and abuse them.

“Law is a tool of colonization, but I think it can also be a tool of decolonization,” said Perron-Thibodeau. She believes knowing your rights is an important step in asserting and defending them.

“It’s good to use (the colonizers’) language sometimes and make them understand that our resilience is founded on recognized rights,” she said. “If they don’t respect that, there can be consequences – and there will be.”

“I think the law has played a very central role in creating and perpetuating the colonial system,” said Sophie Thériault, vice-dean (academic) and full professor at University of Ottawa’s faculty of law, where Perron-Thibodeau studied.

However, students like Perron-Thibodeau are helping to transform the profession, said Thériault.

“She’s an amazing legal professional,” said Thériault. “She’ll also bring a lot of humanity and bring a lot of knowledge and respect for Indigenous Peoples and their rights.”

One of the highlights of Perron-Thibodeau’s experience was persuading the faculty to send her to the Kawaskimhon Moot in Halifax.

Moot court competitions are simulated proceedings that are common for law students, but the Kawaskimhon (Cree for “speaking with knowledge”) Moot is unique for its consensus-based, non-adversarial ethos and its inclusion of Indigenous legal orders.

It was the first year the civil law section of the faculty participated in the annual event.

“Knowing I contributed to implementing such a practice at the university, I really felt good and I felt that there was still a
place for Indigenous orders and systems,” she said.

Thériault noted that Perron-Thibodeau was a mentor for other Indigenous students in her time at the university.

“I think that thanks to Joëlle, we are further ahead in making the faculty welcoming to Indigenous students,” she said.

This has been a passion for Perron-Thibodeau. “If we have more Indigenous professionals, it could really change the face of law and how we interpret it and how we apply it,” she said.

“We need people who are able to bring this beautiful interpretation that Indigenous people have of law.”

She feels so strongly about inspiring Indigenous youth that she even took time while studying for the bar exams to teach
Innu high school students about their rights.