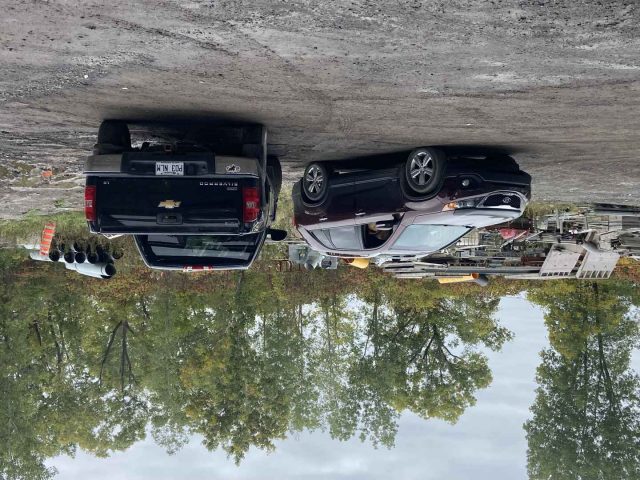 On Monday morning (October 4), land defenders from the Kanien’kehá:ka Nation of Kahnawake made their way to the foot of the Mercier Bridge and halted a small construction project that was set to start.

This action was taken as a reflection of the community’s ‘not one more inch’ perspective. The Longhouse on Route 207 viewed the planned work as an encroachment by the Jacques Cartier Champlain Bridge Corporation (JCCBI).

By Wednesday morning, the occupation was over.

On Tuesday, JCCBI met with the Mohawk Council of Kahnawake (MCK), followed by representatives of the Longhouse.

In fact, JCCBI will go back to the drawing board and make the necessary adjustments to the contract to find an alternative
location to install the small electrical substation. Within a few weeks, JCCBI is set to present the changes to the MCK and the Longhouse.

When the occupation began Monday, Nathalie Lessard, the director of Communication at JCCBI, told The Eastern Door
that the corporation was taken by surprise by the actions taken by land defenders.

“The work that was supposed to start today was improvements of the electrical and Intelligent Transport System equipment on the bridge,” said Lessard.

The director explained that the work was a public safety issue and involved the installation of a prefabricated electric substation.

“It is a really small building that was going to be installed under the bridge near one of the piers.”

“We were also going to dig a trench to connect the shed to the bridge where the electrical wiring would be installed,” she
explained.

She added that JCCBI has been working on the Mercier Bridge since 1998 and that they have always worked very closely
with the community.

“The contractor we work with is the Mohawk Bridge Consortium (MBC). Before we go ahead with any work, whether it’s
electrical or steelwork or concrete work, we always work in collaboration with the community,” said Lessard.

Furthermore, she confirmed that a meeting took place between the MCK and JCCBI where the project was discussed and the plans shared. They even made adjustments following comments by the previous Council, according to the director.

“And for this particular project that was going to start today, we had an agreement on the work schedule and scope of the work since February 2021.”

MCK chief Arnold Boyer, the portfolio lead of the Infrastructure, Transport & Operations portfolio, said that the scope
of the project was delivered to Council before the election, but that the information got lost in the shuffle.

“After the election, the person in charge of that portfolio was not re-elected, so the information was not shared with the council of chiefs,” said Boyer. “That is why I said on the radio that the MCK had no knowledge of this project. That statement was factual.”

In a statement released Wednesday afternoon, the MCK said that the lighting problem on the bridge had gotten worse
in recent months. For safety reasons, it was agreed that the work needed to be done.

“An agreement to allow the building of the installation was made in February of this year; however, the usual communications protocols were not followed, and the information was not relayed to the community asis the normal  practice,” read the statement.

MCK grand chief Kahsennenhawe Sky-Deer told The Eastern Door Thursday morning that although the work had been
approved in February, the JCCBI should have set a meeting with Council prior to the start of the work so that the MCK could have notified the community, thus avoiding this whole situation.

“It left the MCK looking rather ridiculous that we didn’t know what was going on,” said Sky-Deer. “I told JCCBI that the
landscape in ‘Indigenous country’ now is completely different. We are very protective of our land.

“You have to be transparent, and you have to exchange information with us constantly so that we can inform our community members,” she explained.

“What we brought to JCCBI’s attention was that if they had come to us earlier on, we would have let them know that
this is not acceptable and that we need to find alternative solutions that everybody could live with,” said Sky-Deer.

The grand chief said that she had been in contact with Deom and that she thanked the Longhouse for mobilizing and blocking the work.

“I wanted to acknowledge the people who went out there and took a stand because had this happened without our knowledge, then what? We commended them for taking action because sometimes that is what we have to do,” she said.

Sterling Deer, part-owner of MBC, said on Tuesday evening that MBC was aware of the project and that they hoped a solution could be found.

“There has to be a resolution because, in the long-term, it becomes a safety factor for the lighting of the bridge,” said Deer.

According to Deom, during their meeting, JCCBI agreed to keep the lines of communication open with the Longhouse and
to update them on all works and developments concerning the bridge.

“I notified the people that there was no longer any need to maintain the occupation,” said Deom.