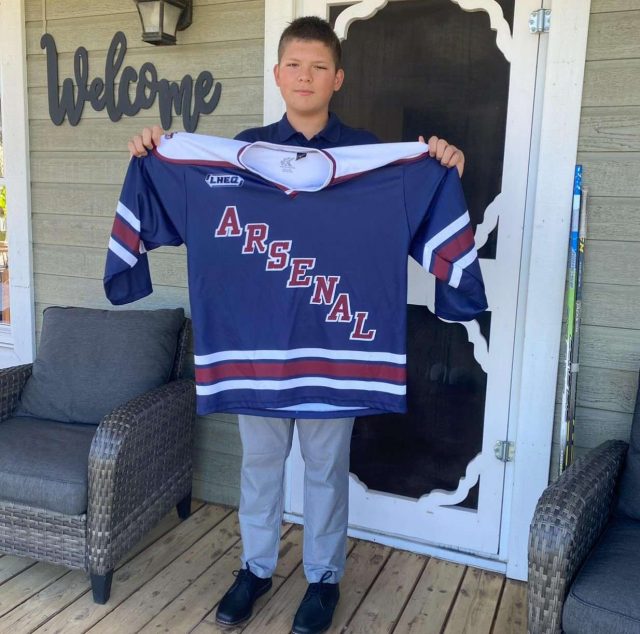 After weeks of tryouts, the suspense is over for two Kahnawake siblings – they’ve both been skating since they were two
years old, but this year they’ll be doing it as AAA hockey players.

Their mother Teri Kirby gave them pep talks as she watched them come home from drills and exhibition games with aching legs, but deep down, she shared their anxiety.

“Every night, I’m telling my husband, ‘Oh my God, this is so stressful,’” she said.

With players pruned from the rosters each week, the competition was never far from the family’s minds. “Every day they’re like, ‘Mom, did you get an email?’”

When both her kids made the cut, Kirby felt relief, excitement, and beaming pride, sentiments shared by their father, Connor Stacey.

“It makes me happy seeing them happy,” he said. “They both worked really hard, and they were both really worried. To see their faces when they made the team, it was unbelievable.”

Their uncles and grandmother are also proud. Kirby’s brothers played hockey, too – one for years in AA – and Kirby’s
mother helps ferry the kids to games and practices.

“I haven’t been to a lot of places where somebody hasn’t congratulated us because it’s really hard to have both of your
kids in this calibre of hockey,” said Kirby.

As for how they raised such talented athletes, the parents attribute some of Ryan’s competitive spirit to a desire to keep up with her big brother.

“She’s always trying to be on the same level as him. She always wants to be outside playing with him,” said Stacey. “When he has his hockey stick in his hand, she has hers.”

“Ryan has been Cade’s biggest fan in every sport that he plays, making signs and cheering him on,” said Kirby.

For Cade, who played Peewee AA in Chateauguay, making the cut was far from certain. The tryout schedule conflicted with a tournament for his baseball team, and he decided to take a week off to play in it. To his relief, he was invited back to hockey tryouts.

“For the last cut, they asked us to go in a separate room, and they called us in one-by-one,” said Cade. “It was a bit scary.”

He was ecstatic to leave the building a triple-letter hockey player. “I was talking to my dad about it the whole ride home,” he said.

A few days later, the family got news that Ryan had also made AAA. “It was just a big happy event,” Cade said.

Ryan, for her part, was thrilled by the quality of hockey at her tryouts, but she had been nervous about being younger than
the other girls, some of whom are months from turning 13. Her mother reminded her to just do her best and have fun.

“She works hard and has a good attitude, and that’s what we love about her,” said Warriors head coach Leslie Oles.

Ryan is the youngest player who made the cut, but she discovered at a team meeting the others had not even been aware of her age.

“She’s not behind at all from a skills perspective or a knowledge standpoint,” said Oles. “She’s right up there with the
other girls.”

Oles said hockey is very competitive these days and that to have two kids playing at the highest level is an accomplishment for the family.

In the long-run, the parents hope athletics will help their kids go far in education, but for now, they’re just excited for the chance to experience high-level hockey as a family.

“They learned at a young age that hard work really does pay off,” said Kirby.