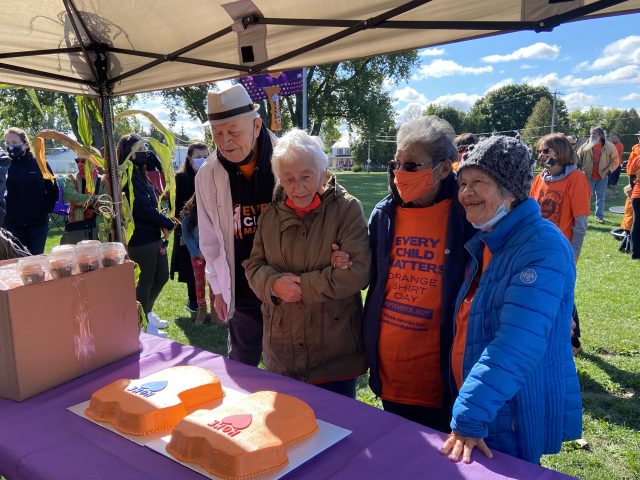 On September 30, community members came together as they have done for the past six years to commemorate survivors of residential schools for Orange Shirt Day. This year, however, was different.

With the discovery of thousands of unmarked graves at former residential school sites across the country and Canada finally recognizing its dark and deplorable past by creating a national statutory holiday – the National Day for Truth and Reconciliation – September 30 in Kahnawake became a celebration of love and healing.

Over 80 people gathered on a warm and sunny morning in the green space by the Orville Standup Memorial Park to celebrate a birthday party held for survivors and for the children that were lost but not forgotten.

Co-organizer Helen Jarvis Montour said that this year she was inspired by an Indigenous community out west that did not
observe a ceremony, but celebrated the day by holding a birthday party.

“The children did not get any love, they did not receive birthday gifts, and they never even got a cake. Some of them didn’t even know how old they were,” said Jarvis Montour, whose father also attended residential school.

There were orange balloons and orange shirts and facemasks all around as people took a moment to reflect while tobacco was burned. Charlie Patton spoke about the history and culture of Indigenous people and their continued struggles, but also about celebrating life.

“My dad is not here with me anymore. He was part of that generation. But he carries on inside me. I’m carrying this on for
him. There are quite a few that have passed on, but the families remain. So, we have to celebrate them,” she said.

After the tobacco ceremony ended, Don Barnaby performed an honour song, as he has for the past few years.

Co-organizer June Skye-Stacey, whose father also went to residential school, said that had he not survived, she, her children and grandchildren would not be here today.

“He is no longer with us. He rarely spoke about what went on, but I know from other family members that it was really, really not pleasant over there,” said Skye-Stacey.

“I had a t-shirt made for my granddaughter last week. Her name is on the t-shirt, and it says, ‘Every Child Matters.’ There are also seven hearts that represent the seven generations,” she explained.

Residential school survivor Kakaionstha Deer was invited to speak during the celebration. She explained that if it had not been for her older sister Ida taking care of her, she would not have made it out alive.

“I was being sexually abused at night when I slept in the baby room. I disassociated all of this. I pushed it down all of my life,” said Deer. “I never knew what was wrong with me, and I had this voice inside of me that would constantly repeat ‘you are no good.’”

She recounted that when she turned 50 years old, she decided that she could no longer continue living the way that she had and embarked on a journey in search of healing.

Deer said that she saw a psychologist and went to see all of the traditional healers in the community. “At the end of my
journey, I became all of me.”

The third organizer, Curran Jacobs, said that they were able to make this celebration happen through donations from community members and from different organizations in the territory.

“Our community is very supportive of each other,” said Jacobs. “I think this year, with a lot of the discoveries that have
been happening, people feel more compelled to support in some way, and money is an easy way for people to feel that they are part of the cause.”

She added that they are extremely appreciative of everyone’s generosity.

The women had two cakes made for survivors as well as small gift bags with little gifts that they said represented the
community.

“He hid his emotions and feelings. He had a hard time expressing love. That is what the trauma left behind. I know my
dad loved us with all of his heart. And I know that if he could have, he would have loved us even more,” said an emotional Rice.