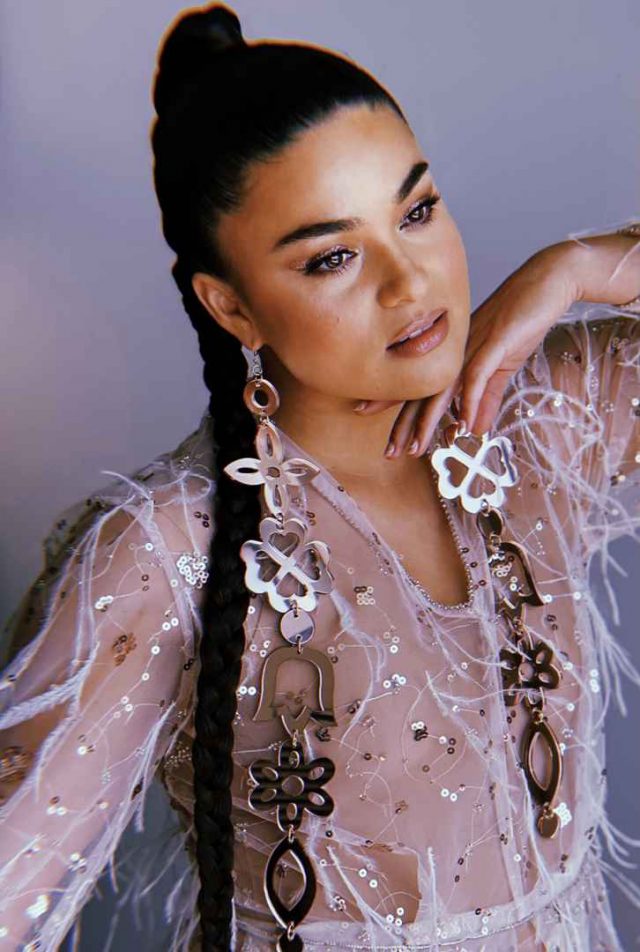 Millions of eyes locked on Kawennáhere Devery Jacobs and her fellow Onkwehón:we Reservation Dogs stars while they took over the 73rd Primetime Emmys Award stage to present an award.

Since the television show, created by and for Indigenous Peoples, began to air, it resulted in a rippling tide of newfound consciousness that can be seen across the industry.

“It’s a good start which can lead us to the day when telling stories from underserved communities will be the norm, not the exception,” stated Jacobs while onstage Sunday, September 19.

The disproportionate exclusion and systematic misrepresentation of Indigenous people onscreen is a matter Jacobs has been tackling with every form of artistry she puts her hand to.

This commitment extends into her acting, filmmaking, and even with the designers she supports.

“I always try to include work from artists who are Indigenous, BIPOC, queer or sustainable – these are the focuses I have when it comes to the clothes I wear and fashion I’m representing,” said Jacobs.

“So when the Emmys came along, it was a no-brainer – I had already been looking for a chance to collaborate with Lesley Hampton for many years.”

Given less than two weeks’ notice to prepare for the awards ceremony, Hampton swiftly put her mind to the task.

“It was honestly such an honour to first translate Devery’s vision of how she wanted to present herself on a platform like this,” said Hampton, who is a member of Temagami First Nation. “As a brand, we’ve also been striving for Indigenous representation on the global scale since everything began for us five years ago.”

Named after its founder and designer, Lesley Hampton, the brand strives to increase diversity and inclusivity in every sphere of the fashion world.

“I love the phrase: representation can be seen as a form of harm reduction. Because if you see yourself in fashion, art or any media platform, it can truly have such a positive effect on your mental health,” Hampton said.

“As a brand, being given a platform like the Emmys means that if we can change someone’s mental health for the better, that’s already huge.”

Complimentary to the awards’ look and Jacobs’ intention to showcase Onkwehón:we talent, was a pair of gold sweeping dangling earrings designed by two-spirit brand Indi City. “They’re not your typical Tuesday earrings,” Jacobs added with a laugh.

If making her Emmys debut wasn’t enough of a dream come true for the Kahnawa’kehró:non, the announcement of her joining the Reservation Dogs writing team starting season two might just do it.

“This is exactly what I’ve been working toward doing and the fact that I get to do it with other Indigenous people is really the dream for me,” she said, emphasizing how grateful she is for the encouragement notably shown by the show’s co-creator, Sterlin Harjo (Seminole Nation). “It’s career-changing, the opportunities and doors he’s opened.”

Among her many other upcoming projects is also ARK: The Animated Series which will appear in theaters in 2022.

“It’s a really awesome animated series which we (actors) all recorded from inside our closets – well at least that I recorded out of mine at the height of lockdown during the pandemic,” joked the actress.

Jacobs will be lending her voice to the series alongside actors such as Zahn McClarnon (who portrays Big in Reservation Dogs), Elliot Page, Madeleine Madden, Michelle Yeoh, David Tennant, Vin Diesel and Gerard Butler. “I really got to work with icons and people who I admire so deeply.”

The latest milestones achieved by the Kanien’kehá:ka artist has everyone looking forward to what she has up her next shiny gown’s sleeve.