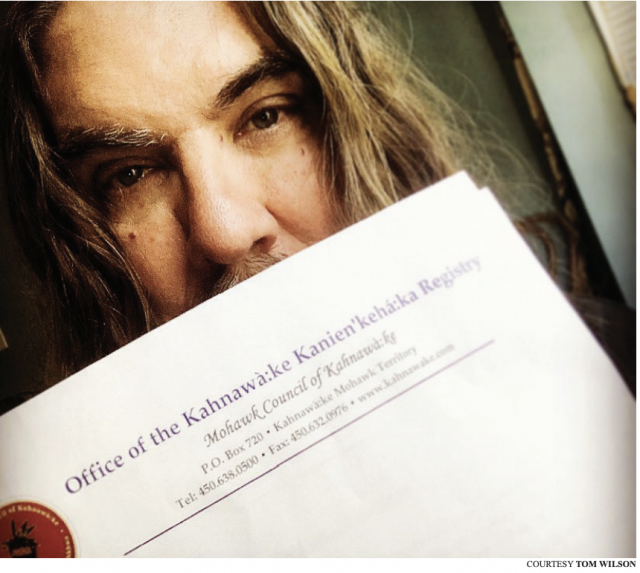 As a young boy, acclaimed musician Tom Wilson would only ever hear about Kahnawake around the kitchen table when adults – who later turned out to be close relatives – visited his parents Bunny and George in Hamilton, Ontario.

He grew up listening to tales about famous wrestlers, activists, ironworkers and heroes who all coexisted in this place he believed was mystical.

“To hear about Kahnawake was like opening a story book to me as a kid,” recounted Wilson.

His fascination for the Kanien’kehá:ka community was fed by the occasional visit to see his mother’s niece, Janie Lazare, who he had always known to be a close cousin living in Kahnawake.

It wouldn’t be until the early 2010s that Wilson would come to find out that his cousin was in fact his mother and that he was, without a semblance of a doubt, Kahnawa’kehró:non.

“The path of my identity changed eight years ago when a complete stranger revealed to me that I had been adopted,” he said. “It took me 53 years to find out I’m Mohawk and who my family is.”

This revelation turned out to be a fateful moment for Wilson who had spent his entire life trying to fill a void he was never quite able to pinpoint.

“When you live in the moment and you’re not plagued by the anxiety of the future or the depression of the past, you can actually sense what is missing in your life – something that I always suspected was that I was in the wrong place,” he said.

Hamilton was the place in question. The relatively quiet port city bordering Lake Ontario is where Wilson grew up, became an artist, made a career for himself as a rock star, and, ultimately, where every lie about his identity was buried against his will.

It was there that then 18-year-old Janie Lazare was sent after announcing her pregnancy to her parents.

She was welcomed with open arms into the home of her aunt and uncle, Bunny and George Wilson. When Janie gave birth to her son, Thomas, he was immediately taken and placed into the catholic child welfare system, followed by a foster home.

Bunny eventually stepped in and adopted Tom, whom she and her husband raised.

“I knew that I didn’t belong in Hamilton. It was a place I always knew was missing something in my life and I didn’t know what it was until the truth came out,” said Wilson. “Now I’m 62 years old and I’m just learning about the people who are my blood and the place I’m from.”

Nearly a decade after finding out the truth, he is still processing the news.

However, no matter how earth-shattering the experience has been, Wilson said he finds comfort in the newfound support and love he receives from his Kahnawa’kehró:non siblings, parents, aunts and uncles.

“I grew up an only child and now I probably have a couple hundred relatives in Kahnawake,” he said with a hearty laugh. “The thing about going to Kahnawake after this is that I met people and saw faces that were just so familiar to me, even though I didn’t actually know who they were.”

The outpouring of affection Wilson received from his family eventually convinced him to apply for membership in the community he long viewed as a mystic place that bred larger than life characters.

Sure enough, the Mohawk Council of Kahnawake confirmed through a letter dated July 15, 2021, that the rock star was one of their own.

“Even though it’s just a piece of paper, when I look at it and see it’s from the Mohawk band council – I know that that’s my home calling me,” he said. “It’s home saying you’re one of us and you’ve got a place here.”

The sheet of paper stamped with the band council red, yellow and black logo, rests in Wilson’s bedside drawer.

Several times a day, he peeks inside the drawer and holds up the letter, tightly pressing it onto his chest.

“It didn’t answer all the questions or solve all the problems of my identity or how I feel about myself, but it’s a really important step for your home to acknowledge you.”

With no way to relive the decades spent away from the people, land and community he belongs to, Wilson pledged to dedicate the rest of his artistic life to driving positivity toward Kanien’kehá:ka culture.

“There’s no way for me to become one of the great Mohawks that grew up there so instead I’m dedicating my art, my writing, my music and the rest of my life,” he said, humbly.

The lifelong journey Wilson embarked on 10 years ago has been a quest guided by patience – a commitment to do well by him, Kahnawa’kehró:non and all Onkwehón:we.

“I can’t force myself to become a Mohawk because I’ve always been a Mohawk, but for me to be able to recognize and feel it, I need to process it,” said Wilson. “I can only hope that I have years ahead of me to be able to nurture this and to bring deeper into my heart and soul.”