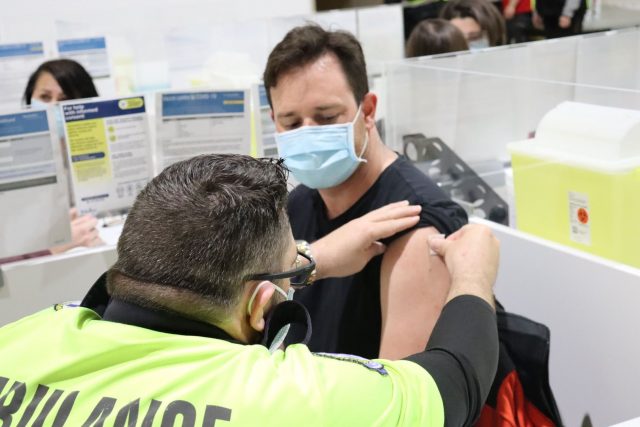 As summer winds down, the number of COVID-19 cases across the province, including Kanesatake, are on the rise.

The confirmation of at least 14 active cases in four households (plus two workers) has been met with an increase in procedures put forth by the Mohawk Council of Kanesatake (MCK) and the health department leading the community’s fight against the virus.

These added measures include additional walk-in vaccination and testing clinics, along with negative test result attestations for asymptomatic individuals returning to work, those with symptoms, as well as potential contacts.

“Most of the people who went to get tested have come back with negative results, which is obviously good,” said Robert Bonspiel, spokesperson for the Kanesatake Health Center Planning and Response Unit.

The Public Health authority has confirmed that a variant has been identified, but the exact strain remains currently unknown.

In order to mitigate further spread of the virus, a vaccination clinic welcomed Kanehsata’kehró:non on Wednesday, August 11, where a total of 55 members received the vaccine.

“We know that the situation worries people and we want them to understand that while worrisome, it is under control in the sense that we’re doing everything necessary to mitigate it so that people continue to be safe,” said Bonspiel.

To facilitate testing for community members, a clinic was set up August 12, 13, and on Tuesday, August 17.

Among the active cases is one which has been linked to community daycare Tsi Rontswa’takhwa.

“As soon as the parents received their results, they informed us,” said child care centre manager Melissa Simon, referring to a call made to the daycare on Friday, August 6.

While Tsi Rontswa’takhwa was initially going to welcome children back on Thursday, August 12, closure was prolonged to allow for additional safety measures.

Doors are now set to reopen on Monday.

“That period was given so that there is enough time for everyone who was involved with the daycare, whether it was staff, parents or anyone, to get their negative result,” explained Bonspiel.

The proof of negative results required for children, parents and staff frequenting the facility must be for tests done no later than 48 hours prior returning to the daycare.

In addition to this protocol, a thorough cleaning of the building was also completed.

“I’m very happy with how the staff, parents, council, Kanesatake Health and the community have been working together,” expressed Simon. “Everyone has been collaborating, understanding and patient.”

With the class bubble system still in place, the health unit was able to establish three educators as possible contacts. The staffers are among the community members currently in isolation.

“We are doing what’s necessary to make sure that those who are sick are taken care of and that those who aren’t do not get sick,” said newly-elected MCK grand chief Victor Akwirente Bonspille. “We’ve all been living this for some time and we just want to put out that everyone still needs to stay vigilant.”

As of today, there are no other cases at the daycare, which cares for 27 children, from newborns to five years old.

“For me, it’s a reassurance that all the measures we have been putting in place have been working and are keeping us safe,” said Simon.

To date, the community has had 49 confirmed infections and two deaths caused by the virus.

As the community prepares for the next anticipated wave, Simon cautions others of the looming threat that represents COVID-19.

“We always had in the back of our minds that this could happen, but I guess you never really begin to think it will until it actually does,” she said.