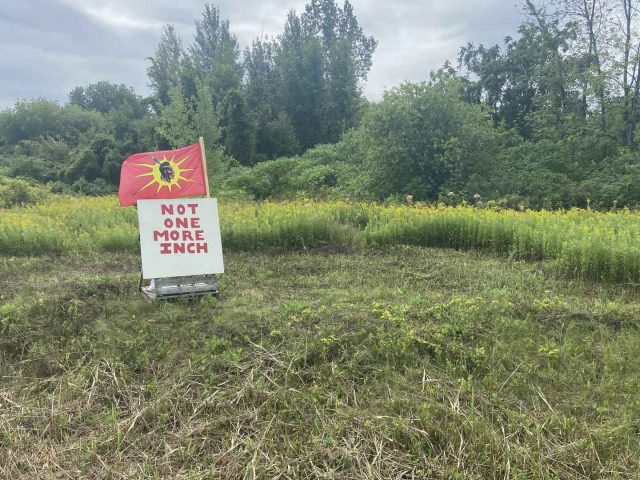 The Kanien’kehá:ka Nation at Kahnawake released a statement on Wednesday refuting public statements made by the mayor of Chateauguay during an interview with K103.7 Monday.

Mayor Pierre-Paul Routhier spoke about the proposed housing development project at the end of the Old Chateauguay Road.

During the interview, Routhier suggested a possible solution to the ongoing land dispute, requesting that the federal government buy the land and use it as a buffer between both communities, which he said the Longhouse agreed to.

The Longhouse on Route 207 responded.

On Wednesday, mayor Routhier told The Eastern Door that if he did mention to K103.7 that the Longhouse had agreed, that it was a mistake on his part.

“This morning, my assistant Mr. Yves Lemire called back Mr. Deom (Joe Deom) who is our contact at the Longhouse and we have apologized,” said mayor Routhier.

“My position is that I would recommend that the federal government step in, buy the lot beside Parcel E, keep it for itself, but to use it as a buffer. That is my position and I have expressed it to the Longhouse.”

However, the mayor made similar statements to The Eastern Door last week during an interview discussing a meeting that took place on July 30 between the Longhouse and Routhier.

“We both agreed on one thing. The best solution of all would be for the government to buy the land so that it can become a buffer of sorts,” said Routhier at the time.

“Because please understand that from our point of view, we don’t believe it is the best for the Mohawk community to be immediate neighbours to the people living in houses in that area.”

Nevertheless, the Longhouse maintains their position that the land is Kanien’kehá:ka Nation territory and always shall be.

Despite his comments on the radio, Routhier did say he was honoured to have been invited by the Longhouse in order for them to explain their position in person.

Longhouse spokesperson Tommy Deer said that the mayor and his aides were welcomed using traditional protocols.

He explained that two presentations were made to introduce Routhier to the traditional government and to the history of the land.

“The mayor then had an opportunity to respond and specifically expressed how necessary it is for the federal government, and to some extent the provincial government, to step in and resolve our land issues,” said Deer.

According to Routhier, during the meeting, he told Longhouse representatives that the land in question was mostly owned by a developer, while the city of Chateauguay owns only a small part.

The 290-unit housing development project would sit on land that is part of the Seigneury of Sault St. Louis land grievance, which has remained unresolved since it was formally launched in 2003. The fact that it is mostly owned by a developer could complicate negotiations for the grievance.

Routhier said that Chateauguay is planning on selling its portion off to the developer.

“Our position is that regardless of what anyone is saying at the municipal, provincial, or federal levels – the land is Kanien’kehá:ka Nation Territory, and we’re not giving it up,” said Deer.

“Our primary objective is to stop the land from being developed. We understand that this is going to be a long, drawn-out process – so we’re just going to take our time and face the challenges as they come. We’re not in a rush.”

The mayor reiterated that the land would remain undeveloped for at least two years as the project first needs to be approved by the Ministere de l’Environnement et de la Lutte contre les changement climatiques because of wetlands in the area.

“I expressed different concerns that I have. If we don’t find a solution – I appreciate that they can be quick to react,” said the mayor.

The Mohawk Council of Kahnawake (MCK) was not part of the meeting, although they have publicly supported the Longhouse and its encampment at the end of the Old Chateauguay Road.

In a letter to Routhier that was sent in March, the MCK formally opposed the housing development project.

The mayor invited Kahnawake and Chateauguay media to ask questions at 10 a.m. Friday at City Hall.