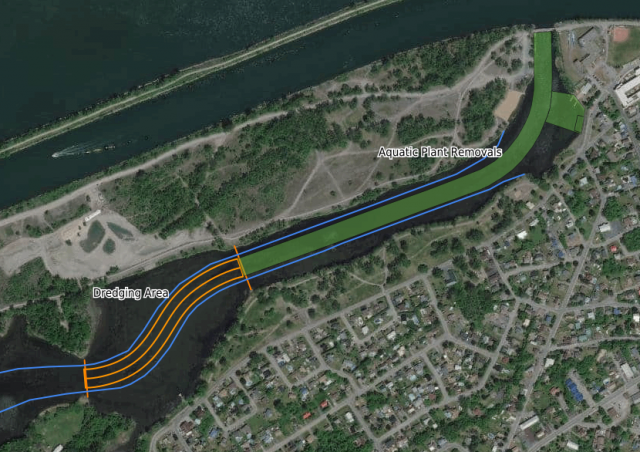 The Kahnawake Environment Protection Office (KEPO) started harvesting aquatic plants in the bay this week, as it prepares to begin the dredging process.

The director of KEPO, Lynn Jacobs, said that the goal is to harvest a lot of the aquatic plants that are proliferating through the bay in order to help the water flow.

“The aquatic plants make the passage quite difficult and (the harvesting) also compliments the dredging work that is going to be starting next week,” said Jacobs.

According to KEPO, the harvesting will last approximately three weeks.

Jacobs explained that the harvesting is done with the help of a specialized boat that pulls the plants from the bay.

The plants will then be placed in a dedicated area on the island to dry and eventually will be used to enrich the soil on the island.

“When they created what exists now when they dumped all of the materials from the creation of the (St. Lawrence) seaway onto the natural island, it became sort of a rocky, somewhat inhospitable habitat.

“We are going to be using a lot of the plants that are high in nutrients to enrich the soil and improve the habitat in the different parts of the project,” she said.

The director further explained that the Bay Restoration Project has actually been in the works for many years, starting in 2005.

“The community has been noticing that the bay has been filling in for several decades. There have been complaints that the people navigating their canoes and kayaks can’t pass during certain times a year,” said Jacobs.

The reason for the impediment is that the sediment from the Chateauguay River and other areas upstream has been piling in over the years and ultimately caused the aquatic plants to grow.

Jacobs said that the team at KEPO has been studying the problem for many years, trying to find a long-term sustainable solution with minimal environmental impacts to help the movement of the water through the bay.

That long-term solution ended up being dredging, which is a process that removes materials from underwater for the purpose of clearing a water pathway.

“We are going to be dredging a channel through the bay, and then the aquatic plant removal is something that we may have to do on a yearly basis just to keep maintaining, until there is less and less, and then maybe we won’t have to do it every year,” she explained.

KEPO plans on monitoring the situation for the next couple of years.

The dredging will last for approximately six weeks, starting on Monday, August 2. In preparation, the contractor hired for the project – RML Landscaping – marked off the dredging work zone by installing turbidity curtains, buoys and pipes.

“There is also fish rescue happening later this week. Our team will use the KEPO boat, and through electrofishing will be moving some of the fish outside of the work zone,” she said.

She added that the fish rescue is an extra precautionary step to reduce the chance of harming the environment while the dredging takes place.

However, community members should note that the north part of the bay (between the dredging zone and the island) will not be accessible as a floating pipe will be pumping the sediment-water slurry onto the island for processing. Moreover, access by water through the bay will be possible only on the south side (mainland side) to bypass the work zone.

“The dredging is the culmination of everything that we have been working towards for the last few years because we really wanted to get it right,” said the director.

According to KEPO, the dredging must also be completed during a specific time of the year to reduce harm to fish and turtles using the bay.

“The seaway caused the problem that we are seeing in the bay, and we want to try and fix what we can of the damage that was done. It will never bring back what we lost, but it does bring back a small part of what we lost,” said Jacobs.

She added that if the problem had not been addressed, then the bay would have seized to exist, and the community would have been left with a wetland instead.