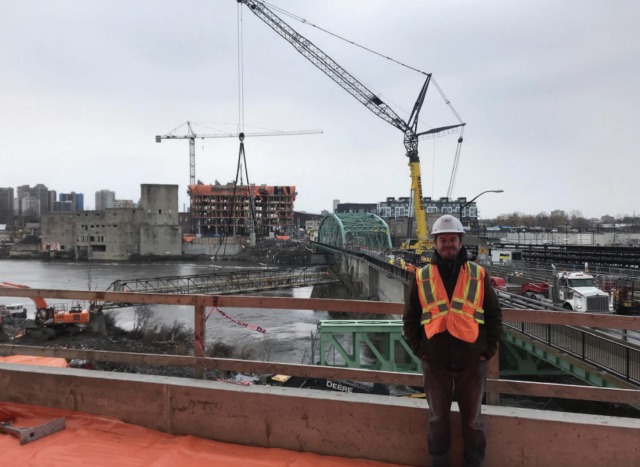 When he was just a little boy, he watched his father and uncles working in construction and as ironworkers, and just like that, Kahnawa’kehró:non Chris Stacey was sold.

“When my daughters and I drive through the city, I can say I built that building, that one, and that one…” he said.

Starting in construction when he was just 16-years-old, working with his uncle Chico, doing renovations, and other types of trades work, he was drawn to the tangible and rewarding nature of working with his hands.

“I really enjoyed the daily challenges and required problem-solving,” said Stacey. He also owned his own renovation company for a short period.

Just over 10 years later, then 28-years-old, Stacey decided it was time to go back to school. “I went to George Brown College in Toronto and got a bachelor’s in building science and project management.” And after working in the big city as a developer, he decided to move to Ottawa to be closer to town.

Since then, his career has continued to progress, from working on automated parking systems, tenant fit-up spaces, low and high-rise condos, and other infrastructure.

For the past three years, he has been working as a manager for their project, District Energy. Zibi partnered with Hydro Ottawa and is creating an example of how a whole community can become carbon neutral using green hydro-generated electricity.

This development is approximately 34 acres in size and is located on the shores of both Ottawa and Gatineau. “It will be a combination of residential and commercial space, and District Energy will supply the heating and cooling to each building, providing energy on a net-zero carbon basis.”

Stacey explained that the goal of this project is holistic sustainability. “The development is dedicated to being designated as Canada’s first One Planet community,” he said.

“Unlike other green building frameworks, One Planet has a strong emphasis on social sustainability. Specifically, One Planet has strong targets tied to health and happiness, community and culture, and equity and local economy, in addition to sustainable building practices.”

Stacey reiterated that the role of the project manager is a healthy mix of challenging and exciting. “I get to make very high-level decisions that affect the project. It’s definitely stressful at times, but, you know, days are long, and years are short,” he said.

Stacey’s interest in sustainability and the environment was always present, but having two daughters solidified this passion.

“Once I became a dad, that really came to the forefront, like looking ahead to our next generation and what can we do now.”

The project manager explained that although all projects don’t have to be to this scale, even Kahnawake can learn from this innovative approach.

“For example, the new hospital in town could have been provided heating and cooling from the river that’s right there,” he said. “The technology is there now. We don’t need to rely on natural gas or other types of sources of energy. I really hope it’s an example for other developers or provinces that want to build something like this.”