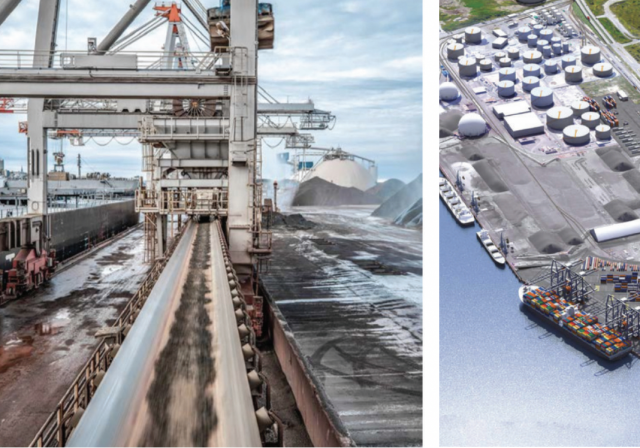 The Mohawk Council of Kahnawake (MCK) breathed a sigh of relief after Ottawa announced that it had blocked the Quebec City Laurentia port expansion project.

The decision, announced in late June, was made after the Impact Assessment Agency of Canada published an environmental assessment report on the project.

The report concluded it would likely cause significant adverse environmental effects to fish and fish habitat, air quality and human health, and socio-economic conditions.

It also highlighted the potential negative impacts Laurentia would have had on the current use of lands and resources for traditional purposes by Indigenous Peoples.

“The expansion of the port project has been stopped, and we are very happy,” said MCK chief Ross Montour.

The chief, who is the lead on the Indigenous Rights and Research Portfolio, said that the MCK lobbied for over a year to halt the project.

“We formally opposed the project. We then began having discussions with the Impact Assessment Agency because we had also been asking for a regional impact assessment to be done for the river,” he said.

The project was originally proposed by the Quebec Port Authority and would have extended the line of the existing wharf eastward by 610 metres, in order to operate a deep-water terminal dedicated to containerized general cargo.

“A huge part was the approach we took regarding the striped bass, and the impact that it was going to have on it and they (Laurentia) had no way of providing assurance on that,” said Montour.

The 31.7-hectare project included the construction of a new berth and a retaining dike that would allow for the development of an additional 17 hectares of backshore space.

According to the MCK, the Rights and Research team kept pushing its concerns regarding the protection of Mohawk traditional land and water use by emphasizing the values inherent to the Ohén:ton Karihwatéhkwen.

In a decision statement signed by Jonathan Wilkinson, the minister of the Environment and Climate Change, he said he referred the project to the governor in Council to determine if the significant adverse environmental effects were justified.

“In accordance with paragraph 52(4)(b) of the Canadian Environmental Assessment Act, 2012, the governor in Council decided that the significant adverse environmental effects that the project is likely to cause are not justified in the circumstances,” wrote Wilkinson.

“This was a difficult decision – but the right one as we look to grow the economy and protect the environment for future generations,” said Wilkinson in a press release.

After the announcement, the president and chief operating officer of the Port of Quebec expressed disappointment with the decision.

“It’s unfortunate that we weren’t able to reconcile our experts’ opinions with those of the experts at Fisheries and Oceans Canada and the Impact Assessment Agency of Canada (IAAC), particularly regarding striped bass,” said Girard.

Montour said that it was rewarding to know that the Impact Assessment Agency of Canada aligned its decision with traditional Kanien’kehá:ka values.

“This is also a fine example of the proper alignment of relationships envisioned within the Two Row relationship model,” said Montour.