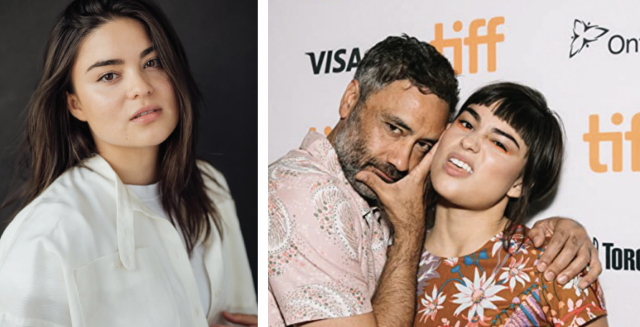 Who would have thought that one of Kahnawake’s own would be sipping tea and cracking jokes with critically-acclaimed director Taika Waititi?

Although once you have a chance to watch Kawennáhere Devery Jacobs on screen, this will no longer come as a surprise.

With a breath of much-needed fresh air, and not to mention a very cool style, Jacobs is gaining attention at an international level.

In her most recent project, Reservation Dogs, created by Sterlin Harjo and Waititi himself, Jacobs plays one of the four main characters named Elora Dana. The series is based on Harjo’s life experience growing up in rural Oklahoma.

“I played a lot of tough girls in my career, and Elora is no exception,” said the Onkwehón:we actress. “But the difference in this show is we get to see all parts of her. When we first meet her, she’s guarded and protective of herself, but we get to see her vulnerable side as the season progresses.”

In this half-hour slice-of-life comedy, premiering on August 9, Jacobs’ explained that the viewers will have a chance to experience the hilarious nature of Indigenous peoples.

“In any reserve you go to, people are just joking, teasing, and laughing. It’s so rare that people see Indigenous people as funny, when I know that to be a fact of the matter,” she said. “My aunties are hilarious. Everywhere I go, everybody’s always joking, and we haven’t had an opportunity to see that before.”

Similar to other Onkwehón:we actors, Jacobs is normally the only Indigenous person on set. But for Reservations Dogs, things looked a lot different.

“It is the very first network show that has an all-Indigenous writer’s room, director and core cast,” she said. “There were Indigenous people in almost all positions and departments.”

With the lack of representation of Indigenous people onscreen, Jacobs feels that it’s so important society puts to rest the overused stereotypes of the “stoic Indian,” and the “Indian Maden,” and lean into the real, nuanced, and truthful narratives.

“It was so refreshing, rewarding, and empowering to walk on set every day and feel like it was our space. I had never experienced that before.”

She also played Jess Wells in the sitcom Rutherford Falls, another series known for its Indigenous representation. Although both of these projects are comedies, Jacobs notes the important distinction of their content.

“It’s showing audiences that were also so different. One’s a sitcom, and stylistically and tonally different than Res Dogs.”

Jacobs is so excited that these programs are finally gaining traction and that Indigenous Peoples working in the industry can tell their own stories, but she reiterated that this is just the beginning. “Two shows are not enough. I want to be able to see as many Onkwehón:we stories as there are storytellers.”

Waititi was the one to cast Jacobs, and she explained that getting to know him was an incredible experience.

“He’s somebody that everybody wants to be around,” she explained. “We owe the show to him for opening this door for us in telling a story.”

The actress explained that Waititi, despite his fame and glory, remains a global community member. “He shares his success with his collaborators and other Indigenous people and creatives who are coming up.”

With some themes of family, community, and friendship, this fast-paced show about kids living in a small town depicts biting humour while weaving in losses and hardships faced by Onkwehón:we. “But, when things start to get heavy, you’ll get pulled out with a really funny joke,” she said.

Jacobs noted that a trigger warning is needed later on in the first season, and she will make sure to let the community know prior to the episode’s premiere.

Along with acting, Jacobs collaborated with Made Nous, in a campaign titled “Seek More.” This project was designed to encourage Canadians to seek and demand more diverse content.

Through print, press, trailers, and short documentaries, Jacobs shared her experience being an Onkwehón:we actress and the importance of consuming diverse television and film.

“It was very vulnerable. I’m used to being on camera, and being in a scene and pretending that the camera doesn’t exist,” she said. “I’m not used to looking at the camera straight on and sharing my experiences.”

And although Jacobs is hitting her stride, hanging out with superstars, and busy being a trailblazer in her industry, Kahnawake is with her every step of the way.

“I always hold the community in such a high consideration in all the things that I do.”