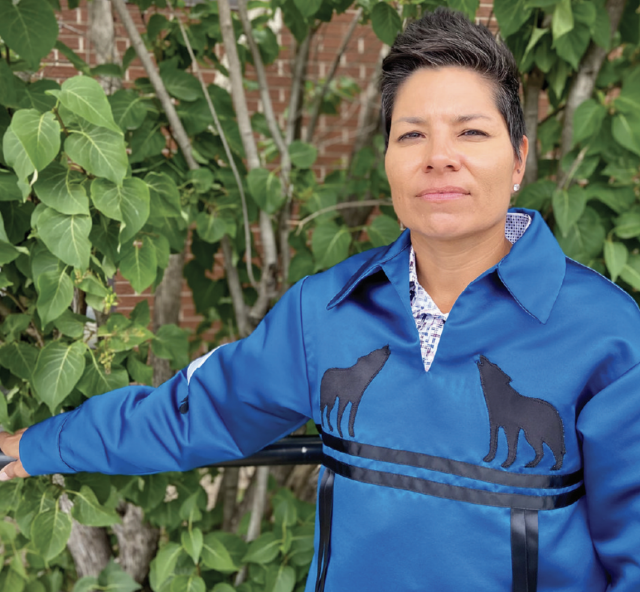 The people of Kahnawake have spoken, and elected Kahsennenhawe Sky-Deer as the first-ever female grand chief. It was a historic and ceiling-shattering moment for the community.

“Niawenhkó:wa kwah akwé:kon for all of your support and your faith in me and in us. As Kahnawa’kehró:non and Kanien’kehá:ka you believed in a message of change,” said Sky-Deer after the results were announced at Saturday’s Mohawk Council of Kahnawake (MCK) election.

The new grand chief, who is also part of the LGBTQ2S+ community and was first elected to Council in 2009, received 573 votes. Trailing behind were fellow MCK chiefs Gina Deer with 368 votes and Frank McComber with 344 votes. “I honestly became overwhelmed with tears of happiness, pride and honour. I had my grandmother there with me. She is 85-years-old, and I was so happy that she was able to share that moment with me. My dad was also there,” said Sky-Deer on Tuesday.

One of her goals is to bring together the community’s traditional governing bodies and elected Council to work for the people and advance Kahnawake’s interests in the national political arena.

“When we see things that are coming at us that will have negative impacts, or that don’t take into account our rights, we need to take a solid stand. It’s finding that one-two punch combination where we are coming at it from both angles – but having the same common message.

“The impetus for change has to come from the collective because ultimately, they are going to dictate how governance in Kahnawake is going to look in the future,” she said.

Sky-Deer is a second language speaker who acquired much her knowledge about the culture when she attended the immersion program in town.

She said that at the start of the nomination process for the MCK’s 2021 election, she was still hesitating on whether to run, but the more she spoke with community members, the more she became convinced that it was her time.

“The leader of this community needs to be somebody who knows how to speak our language, who has an understanding of our culture and who we are as Kanien’kehá:ka people, and I think that sets me apart from the other candidates,” said the new grand chief.

Before being elected to Council, she lived in Florida for eight years, where she played women’s professional football and was a star quarterback for the Daytona Beach Barracudas of the Women’s Professional Football League.

She later decided to go back to school and got a bachelor’s degree in psychology from the University of Central Florida in Orlando, with the intention of returning to Kahnawake to help her people.

“With the discovery of the mass graves, there’s been a lot of anger, sadness and trauma. But now we are going to forge forward in a new direction and ensure that this generation and our future generations are strong in their identity,” said Sky-Deer.

She hopes to be a role model and inspire young girls now that the ceiling has been broken. “Women can do anything that they put their minds to. The sky is the limit,” she said. The new grand chief is married and shares five stepchildren and two grandchildren with her partner. She hopes that her election win motivates others in the LGBTQ2S+ community.

“It’s about looking at the person and character, the strengths, the abilities and what they can do for the community. Does it really matter who they are attracted to or in a relationship with at the end of the day? Live and let live and let people be who they are,” said Sky-Deer.

During Saturday’s election, the community also voted in 11 council chiefs who make up the rest of the MCK.

Six incumbent council chiefs were re-elected, including Tonya Perron – who received the most votes of the night with 992 – along with Ross Montour, Cody Diabo, Michael Delisle Jr, Lindsay LeBorgne and Harry Rice.

“I was pleasantly shocked and honoured to have all that support. And just really excited about starting a new term,” said Perron, who also wants to bridge the gap between the community and Council.

Ross Montour has served one term on Council and said he was pleased to have Sky-Deer as the new grand chief, and is looking forward to the next three to continue serving his community.

“We had our first meeting on Monday, and it went well,” said new Council chief Rice.

Rice worked in the membership department of the MCK for the last three years and said that the experience he gained, along with community engagement, had prepared him for this new endeavour.

Lazare said she wants to advocate for the voices of the community and to follow the direction that the people want.

Overall, the new 2021 MCK Council is much more diverse than the previous one and, according to some chiefs, a better representation of the community.