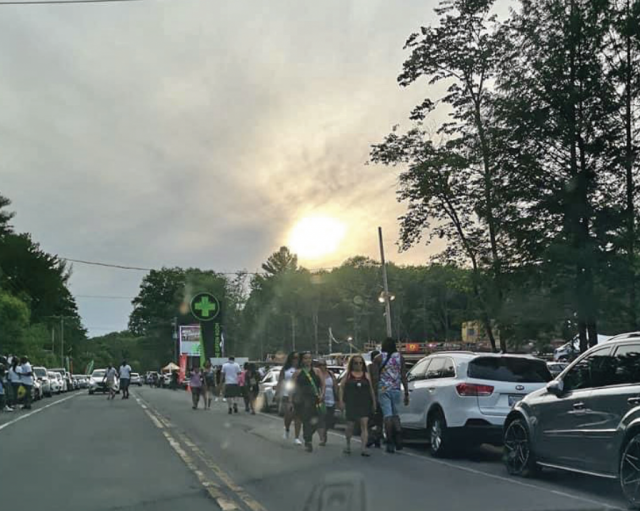 This article was written in collaboration with Eastern Door contributor Robin Della Corte.

With the addition of every car lining up on Route 344 last Saturday, June 12, Kanehsata’kehró:non became increasingly concerned.

It was an event organized at The Green Room cannabis shop over the weekend that attracted hundreds of non-locals to the territory. Beginning around 3 p.m., the crowd disrupted the community until at least 9 p.m. that evening.

While attendees primarily gathered outdoors where a DJ was stationed, playing music, videos published online depicted that public health guidelines such as physical distancing and mask wearing were absent.

As the community stood troubled by what they were witnessing, some members took matters into their own hands.

Kanehsata’kehró:non Karonhienhawe Nicholas spent the day managing her kids and trying to help other community members divert traffic away.

“The people there were parking on people’s properties and on the side of the highway. They just kept coming in,” said Nicholas. “They were walking in the middle of the road like they owned the place.”

The concerned mother said that the partygoers even made threats to community members. “It was dangerous because many of the outsiders were irate, rude and threatening,” she explained.

According to community members and local authorities, partygoers were also seen urinating, defecating and vomiting near private properties.

Mark Bonspille expressed indignation over the apparent chaos led by the event.

“There were people throughout the road, walking in a 80 KM zone,” he exclaimed. “There was a lot of swearing and threats directed at locals.”

Mark recounted that as he had to redirect drivers from parking on his 69-year-old mother’s property.“Now my mother’s home is in danger,” he said, adding that he and his children also live in the house.

As the party expanded beyond the Green Room parking lot, Mark said there was a complete disregard for laws in place.

“People from the outside who came here thought that they could come do whatever they want because there is no police. They had in mind that they were untouchable,” he said.

Although the Surete du Quebec (SQ) reported being advised about the gathering around 3:30 p.m., spokesperson Marc Tessier said that it wasn’t until late in the evening that officers set up blockades on the road.

“When people began to leave around 9 p.m., we had put up checkpoints at the extremities of the road,” said Tessier. “At least 400 vehicles were checked at the two points of control.”

The spokesperson explained that the checkpoints were set up to make necessary verifications, including looking for signs of alcohol or drug impairment in drivers.

When asked about potential infractions committed and tickets handed on Saturday, Tessier said he wouldn’t share any information on the topic.

The SQ agent also refused to disclose information about whether or not officers took any other actions to disperse the crowd or cease any trespassing in the community.

It’s with concern for his family and community that Victor Bonspille, a Mohawk Council of Kanesatake (MCK) chief, sought answers from the police force that afternoon.

“I asked the SQ, ‘why aren’t you guys doing anything?’ and they told me that they were outnumbered and that it would only cause a riot or initiate one if they came,” he said.

According to him, an SQ officer said that they do not intervene when there is an issue in the community because superiors direct them not to.

As much as the SQ was nowhere to be found, community members like Lisa Gibson stood their ground while the havoc persisted.

“Threats were being made, guns were being drawn, residents were being intimidated by the owners and their crew at The Green Room,” Gibson said. “Me and many others were afraid something terrible was going to happen.”

One of the owners of the establishment, Gary Tsikahentiio Gabriel, said that Saturday’s incident was meant to be nothing more than a gathering where people could respectfully and safely enjoy music.

“We were supposed to have just a small show but things really got out of hand,” said Gabriel. “Because we are an hour away from Montreal, we were not at all expecting this many people to show up.”

The business owner said that by the time they had become aware of the magnitude of the event, there were simply too many people for them to manage.

Gabriel expressed that he and his staff are very apologetic about the whole situation..

“I would never want to put any of my community members in danger – we all care about our members,” he expressed. “It is out of the question at this point to have any more events, gatherings or anything like that. We are not going to let any of that happen again.”

The perceived lack of intervention by the police force to put an end to the gathering was heavily condemned by locals and non-locals alike.

MCK grand chief Serge Otsi Simon said this inaction was the latest incident where the SQ had fallen short.

“I’m really angry about that, but I’m not shocked. This is the double standard,” said Simon. “If this were to happen anywhere else, they would shut that thing down or at the very least stop people.”

The grand chief expressed that the Kanien’kehá:ka community has long been a place of oversight for the provincial police force responsible for ensuring the safety of citizens.

The mayor of the neighbouring municipality of Oka also agreed that the SQ failed to uphold their duty as a law enforcement agency.

“I was as worried for the security of my citizens, as I was for that of members of the community of Kanesatake,” said Pascal Quevillon. “It was obvious that this was an out of control party.”

Quevillon described the state of the event as “deplorable” as he emphasized his frustration over the SQ’s failure to act.

“This would have been a good moment to show the Mohawk community that the Surete du Quebec is there to protect them, but unfortunately they did not take this opportunity,” he said.

While the community was left on its own, Emergency Response Unit (ERU) spokesperson Robert Bonspiel said he and his team spent the day worried about the community’s safety.

“The mandate of the ERU is to mitigate and manage emergency response in regard to pandemic, which includes making sure people are safe and this party went against all public health guidelines,” he said.

The event quickly expanded as more people arrived and began to spread to other store parking lots, residential areas, school backyards and even the local cemetery, where Bonspiel said a man was found passed out on a tombstone.

The ERU spokesperson said that although damages are still being evaluated, so far bottles of alcohol, drugs and used condoms were found left behind.

“Our population was abandoned by everyone, we had no assistance and we couldn’t fix the situation because we were outnumbered,” said Bonspiel. “The people who are required to help refused to come.”

According to him, multiple infractions were committed, including some against the Highway Safety Code and Criminal Code.

In a press conference held on Sunday, June 12, Quebec premier François Legault condemned the behaviours observed at the event.

“It’s unacceptable what happened in Kanesatake. I wasn’t happy to see the pictures,” said Legault, adding that he expects the SQ to reprimand attendees.

“We’ve spoken this morning to the SQ to see how they can give some penalties to these people and I hope we will not see that again,” said Legault.

While the premier did not say whether or not the SQ should have intervened, he said he was open to a proposal for the community to have its own policing service.

Public Security minister Geneviève Guilbault confirmed Monday that discussions have in fact been underway with Kanesatake leaders about bringing a local policing service back to the community.

Simon said he was pleased to see provincial government officials acknowledge the proposal he and other council members have been pushing to concretize.

“The goal of the policing service is to exercise our rights as a nation to formulate our own laws and uphold them,” said the grand chief. “Policing is not just about criminal activity – it’s about protecting our youth, our elders, our economic development projects and our environment, for God’s sake.”

While Simon is pushing for the enforcement of laws through a local force, community members are questioning the current leadership.

“Otsi was nowhere in sight (Saturday), he came out after, but only to the press,” said Nicholas. “I love my community. We have so much potential – we could be better than this.”

Chief Bonspille expressed similar frustrations about the absence of the grand chief.

“If you’re going to be on council, then be here for your community,” he said. “Kanesatake needs a change.”

Even with the possibility of a local policing service in the works, Kanehsata’kehró:non are determined to prove that they will never cease to stand up for their brothers and sisters.

“That day, I was on the line protecting my community the best way that I could,” said Mark. “I don’t need to be paid to protect my family or my community – I am going to do it because without my community, I have nothing either.”