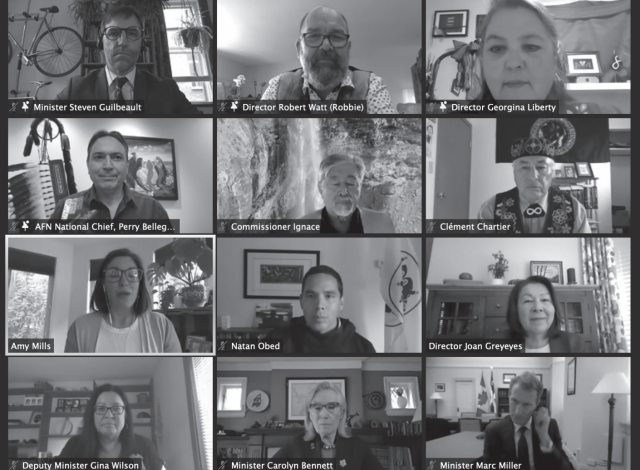 Commissioner Ignace, of the Secwepemc (Shuswap) Nation, is honoured and devoted to furthering the revitalization of these sacred languages.

“For those who have passionately cared about and fought for the future of our Indigenous languages, getting here has consumed nearly a lifetime. We have lost many speakers and elders in this process. To them, I dedicate my work,” he said during the announcement on Monday.

The commissioner acknowledged the amount of work ahead and believes that this team has the gumption to take it on. “Together, with my three directors, I look forward to serving you all in this task. Some of our languages are hanging by a thread, however, we have inspiring stories from each community in different parts of Canada,” he said. “This gives us hope and shows we can turn this around.”

One of the directors, Nunavik’s Robert Watt, explained that as a collective, we have to ensure that Indigenous languages do not disappear.

“I thank you for this opportunity and I look forward to working with you all,” he said during the press conference. “Language is very important, and our individual languages are very important. We must never forget that.”

Another director, Joan Greyeyes, emphasized her passion for this unique role. “This act enables us to talk about Indigenous languages in everyday conversations, which is something that needs to happen for us to be able to promote our Indigenous language in Canada,” she said.

Director Georgina Liberty, a Manitoba Métis Federation member, is eager to begin this role. “It is my honour to be the representative, to preserve, revitalize and strengthen our Michif language,” she added during the conference. “I would also like to acknowledge our federal ministers that are also partaking today.”

Canadian Heritage Minister Steven Guilbeault announced the directors and expressed his optimism for the future.

“I am confident that they will play a key role in promoting Indigenous languages and supporting efforts and aspirations of Indigenous Peoples, that will allow these languages to flourish and grow,” he said.

“Coming together today is significant, and dismantling of anti-Indigenous racism and colonial violence will require everyone’s commitment.”

Mohawk Council of Kahnawake chief Kahsennenhawe Sky-Deer, who is also the portfolio chief working on language and cultural matters in the community, said in an interview with The Eastern Door that Kahnawake has been part of this engagement since the language act made royal assent in 2019. She is eager to witness the government’s tangible action.

“We are at another juncture in terms of implementation of a legislation from the government, so now let’s see them put their money where their mouth is,” said the chief.

“We have seen a lot of rhetoric, so now let’s actually see the funds make their way to the community. This way we can increase service delivery, enhance our language program, and get our teachers funding for the work they are doing,” she said.

Sky-Deer hopes that this act will create sustainable solutions, and that its effect will transcend the present; creating real, longterm change. “I want our future generations to be proud, fluent and vibrant speakers of our beautiful Kanien’kéha language,” she expressed.

From the Assembly of First Nations, national chief Perry Bellegarde spoke during the meeting, emphasizing the impact of language on identity.

“Our Indigenous language should be viewed as the national treasures that they are.”