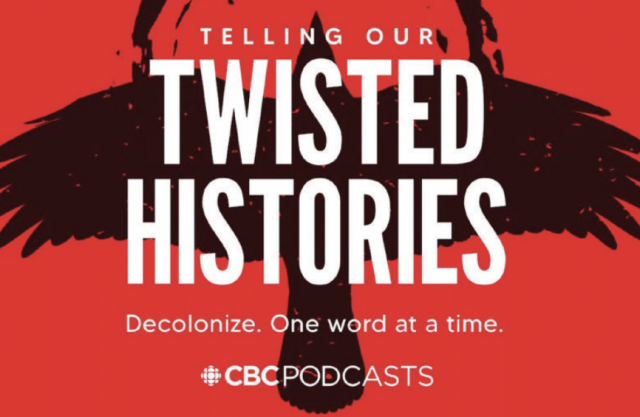 They say a picture is worth a thousand words, but what is the value of one word?

These are the words explored in the first two episodes of CBC’s podcast, “Telling Our Twisted Histories,” a production uncovering the layers and impact of centuries of colonization while giving a voice to Indigenous peoples.

The host, beloved Kahnawa’kehró:non, and actress Kaniehti:io Horn, takes us through the journey of many people from different nations, including a significant representation from Kahnawake.

In the first episode, the word discovery was discussed, allowing the listener to hear the frustration Onkwehón:we feel surrounding the way this word is used in the context of Canada. They debunked any settler’s claim of “discovery” of this land, as of course, it was not discovered, it was stolen.

“It was interesting that the different interviewees all had the same reaction to the words, never even having met each other,” said the actress. “The commonality being that we’re Indigenous, so our relationship to these words were the same.”

This show was based on the Radio-Canada podcast, “Laissez-nous raconter: L’histore croche” written by Karine Lanoie-Brien. The English version was directed by Inuk journalist Ossie Michelin.

“When I first started working on this, I knew we had something powerful,” said Michelin. “But to hear it all together, I was blown away.”

Michelin explained that since the podcast had been previously made in French, he had a template to use as a skeleton.

Along with this great premise, the director was very happy with the sources. “They are all just regular folk. It’s not telling anyone what to do or preaching to anybody. It’s people sharing their thoughts and perspectives,” he said.

With these short, punchy and accessible, 20-minute episodes, the CBC team has packed in moments of laughter, tears, and introspection.

“I had two audiences in mind, Indigenous people being the main one, for a chance for us to hear our voices and our perspectives. But I also wanted to make it accessible for settlers who are curious and want to learn more,” said the journalist.

He believes that one of the best ways to learn is by listening. “It’s about hearing our conversation,” he said. “The episodes are all entry points into these larger conversations.”

Michelin believes that Lanoie-Brien’s idea to base each episode on terms we hear every day can create significant reflection from listeners.

“If you start with something simple like a word, and choose words that have so much power to impact Indigenous people, conversation, reactions, and emotions will flow from it,” he said.

Last week, after the horrific announcement that the remains of 215 Indigenous children were found in an unmarked mass grave in Kamloops British Columbia, Michelin and the podcast team decided to change their original episode order and publish the show that discussed the word “school.”

This episode gave Indigenous people from many different communities a chance to speak about the traumatic impact that residential schools have had on their lives and its continuous, intergenerational impact.

The podcast also highlights the similarities and differences across nations depicting that although many things set each Indigenous community apart from one another, there is also a powerful sense of unity.

Having these voices and perspectives shared in this way is truly invaluable. “It’s really important for Indigenous people to tell Indigenous stories,” said Michelin. “Not to say that other people can’t, but it’s always something special when you can define your own story.”