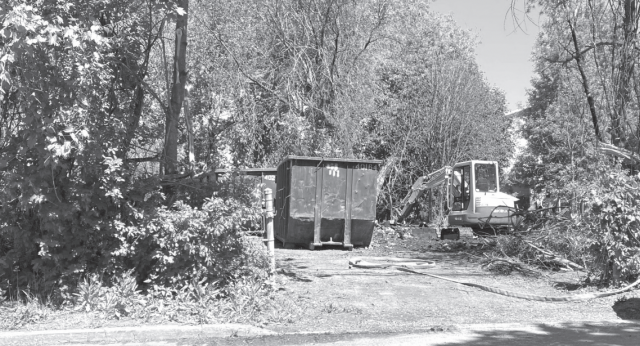 After a devastating fire destroyed most of Gale Laborgne’s house last month, the community – as it typically does – quickly came together to help her in her time of need.

Kahnawa’kehró:non rallied around Laborgne, providing her with moral support, donations and ongoing fundraisers with the hope of helping her rebuild her lost home.

Her sister, Lynne Norton, opened a relief under her name at Jacob’s Hardware, and within days someone donated $5,000.

According to Norton, the fund at Jacob’s now has over $8,000, which will be used for the construction costs.

Moreover, community members have also donated time, machinery and equipment to help with the rebuilding process.

“That is how this community is,” said Norton. “When they hear someone is in need and about something as devastating as a house fire, they come together very fast. I kind of put myself as the contact person, seeing how my sister’s state of mind was at the time, it just took that much off her.”

Norton said that when news of the fire spread through the community, people just started donating money. Then, her sister Tricia and her niece Lisa started a half-and-half raffle, which was a huge success.

“To date, they raised approximately $2,500 as the half. Tickets are still available until June 13, when the winner will be drawn. We are trying to get to at least $3,000. That would be nice to both the winner as well as Gale’s donation,” she said.

Further, Leborgne received monetary donations from profits made on Facebook “spinners.” Her sister said that she was shocked by how generous people have been.

“K103.7 radio has a monthly community fundraising game. They normally only have one a month. This month they felt strongly enough to put a second one in, and it went to Gale’s fundraising. Over $1,500 was raised in that one game,” said Norton.

Editor/publisher of The Eastern Door, Steve Bonspiel organized a hockey seconds raffle, which brought in $1,500 for Laborgne.

However, Norton explained that they still don’t have a monetary goal because Laborgne has had trouble finding a contractor.

Leborgne, who owns Peace Pipe Convenience, used her garage as a storage room for her store. In the fire, she lost all of her stock. She also lost her bedroom, which was on top of her garage.

“We received a rough estimate which gave us a reality check on what we are looking at. The price is three times what we thought. We are trying to figure out what we can afford with what we got,” said Norton.

Norton said that Slash Excavation has generously donated machinery and manpower that has helped Laborgne tremendously.

“We also have an offer from JFK Quarry via Frank Fafa McComber, who will help her with cement and concrete needs. That too will save us a lot,” she said.

Norton said that Leborgne is still struggling with the aftermath and breaks down when she thinks of what could have happened that fateful night.

“I just tell her, ‘Don’t go there. ‘You and Ni’karahkwa (her grandson) are both fine,’” said Norton.

She is, however, forever grateful for all of the help and support that she has received.

“She knows it could have been worse. She knows people have gone through worse house fires. People have lost their whole houses. She knows that.

“She will rebuild what she can when she can. She would just like to say niawenhkó:wa to you all,” she said.