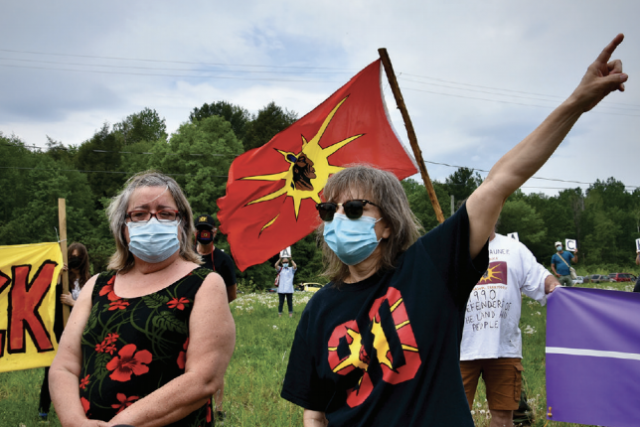 The sounds of cars honking, supportive words, rhythmic drums and lively singing echoed far and wide in Kanehsatake on Saturday, where a car convoy took place to raise awareness. 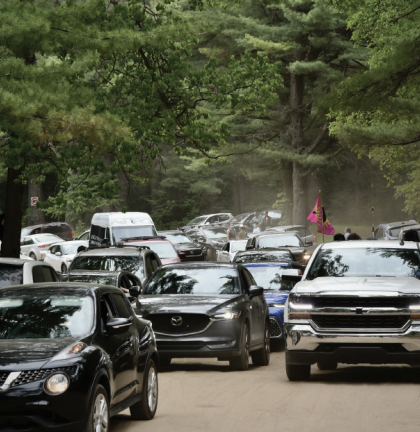 The matter at the heart of the protest is once again the concerns which persist over the protection of territories subject to historic land claims.

There were almost 100 people, including Kanehsata’kehró:non land defenders and allies from across the region, present to demonstrate their support in the ongoing efforts to protect the Kanien’kehá:ka territory of Kanehsatake.

The rally was organized as a reminder that this issue is not going away on its own.

“We are trying to keep the pressure up,” said outspoken land rights activist Al Harrington. “It means a lot to see everybody that showed up today – it restores the faith in people.”

At the initial meeting point off of Route 344, pines towered over the heads of community members; a conspicuous reminder of what is at stake in this ongoing fight.

When the clock struck 11 a.m., Kanehsata’kehró:non were the ones to lead the trail of cars down the road, past the ferry dock in the municipality of Oka, and towards the final rallying point.

The bright colours of the Ieweras Gray, Warrior, and Haudenosaunee Confederacy flags stood out as the convoy lasted close to an hour, before cars arrived at a residential development site located next to the Pines.

“This has been a long journey for many generations to try and stop the land theft that you see here surrounding this development site,” said Onkwehón:we rights activist and representative of the People of the Longhouse, Ellen Gabriel.

“Once again, we are forced to protest and continue our fight to protect one of the last few traces of our homeland from encroachment and outright land fraud.”

Organizers and protesters were adamant on their intention to end any new building on Kanehsatake ancestral lands, which include the site that borders the forest at the centre of the so-called 1990 Oka Crisis.

“We have tried the peaceful methods to bring resolution to our land conflict, but our voices incessantly fall upon deaf ears,” said Kanehsata’kehró:non Wanda Gabriel, who, along with Ellen, served as a liaison person throughout the Siege of Kanehsatake in the summer of 1990.

“The economy trumps the inherent human rights of Indigenous people.”

As the pair stood in front of a series of Land Back banners, they reiterated that issues that pertain to land conflict in the community are far from being over.

“This is not a new issue, it is a three-centuries old conflict that persists because of systemic racism, ignorance and the cruelty of colonization,” expressed Ellen.

As a means to achieve concrete measures to protect the land, organizers called upon all levels of governments to intervene.

“We call upon prime minister Trudeau to declare a moratorium upon all development, and to sit down with Rotinonhsión:ni of the Longhouse: the traditional government upon which the women are not only vested as the title holders of our homelands, but also as an obligation to protect the land,” said Wanda.

In addition to this call to action, a demand was also made for governments to permanently stop residential developer Grégoire Gollin from selling any additional land situated on the traditional territory, which they say was fraudulently purchased.

In an interview with The Eastern Door, Gollin doubled down on his word not to build on the lots he purchased in the early 2000s.

“I have no intention to start a development project on my lots in the Pines,” said Gollin. “I do not know where this rumour about me having a project to build there started, but it is nothing short of fake news.”

Gollin evoked that the claims surrounding his intentions are the result of nothing more than a misunderstanding, which he speculates may have come from his intention to meet with the municipality after a rezoning of the area was done without his consultation.

He explained that Oka recently rezoned the sector where the property in question is located from a residential one to a conservation one.

“All the current conservation zoning put forth by the city have also made the object of a heritage quoting, meaning that it’s impossible to even obtain a permit to build,” he pointed out.

For his part, Gollin expressed that he had met with the Mohawk Council of Kanesatake (MCK) in the past, namely to consult them about the land. In addition, he stated his continued intention to donate 60 hectares of the Pines which are under his name, through a federal “ecological gift” program – a project which was brought to a halt when Oka opposed the initiative with a bylaw to declare the Pines a heritage site.

“The municipality zoned the section as a patrimonial site and I see this as badly-intentioned and provocative,” said Gollin, adding that he believes Oka’s decision to rezone the area was possibly a retaliation to his refusal to donate the land to the municipality.

Although Gollin has sold land in recent years to allow the construction of houses in Oka’s Domaine des Collines, he assured the community that no real estate development will take place inside the forest, which he acknowledges is at the core of land claims and holds sacred significance.

“I simply blame the city for not having respected my right as a property owner and not wanting to sit with me to find a proper solution,” he said.

“They say that we have to stop Mr. Gollin, but stop him from what? He has no intention of developing in the Pines and he made that clear in the agreement he made with us,” said the grand chief.

While he emphasized his support with the right of community members to protest, Simon said feelings aimed at the residential developer should be redirected toward others.

“Everyone is forgetting about the real culprit in all of this – the ones sitting up there in Ottawa, watching the whole show and not doing a damn thing about it,” added Simon.

As the Israeli-Palestinian conflict has reignited in recent weeks, Ellen Gabriel said that many land defenders see this conflict as an Indigenous issue and they are committed to showing solidarity with this community overseas.

“We declare our support for the Palestinian relatives whose struggle with land disposition like ours continues,” said Ellen. “We hope for peace on their lands, for all human beings – no matter what their affiliation, so that everyone can join a movement of change.”

Taking part in the convoy was Norma Rantisi and Tasnim Rekik, two Palestinian protesters who explained the significance of extending their support by attending Saturday’s event.

“As a Palestinian, I too am subject to settler-colonial practices, but I also owe responsibility as a settler here to fight against the ongoing land dispossession,” said Rantisi. “The struggles for liberation, while different, are inextricably linked. These are global struggles, and we have to work together.”

Rekik also expressed that what community members are witnessing is ultimately part of a widespread global issue impacting all Indigenous Peoples.

“What is happening in Sheikh Jarrah is happening here in Kanehsatake, and to so many more Indigenous people around the world,” said Rekik.

It is with a focus of continuing to apply pressure on the actors involved with the decisions impacting the land conflict in Kanehsatake that organizers also pleaded upon allies to take action by boycotting Oka Park and seeking answers from government officials.

“We are here to ask you to help us get a meeting with the government of Canada and to have a friendly relationship with the people in Oka,” said Ellen. “All we are asking for is peace and our land back.”