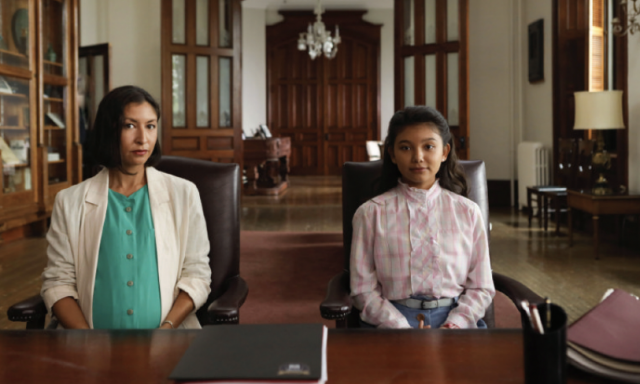 On Wednesday the film was also given the Crystal Bear award from the Berlinale Film Festival for best film in the K14 Generations program.

Deer’s humble words follow members of the cast that weren’t as taken aback.

“Honestly, I was not that surprised,” said Taio Gélinas, who played Coyote in the production. “Beans was so well constructed. Everyone who worked on the set, be it extras, or crew members, big role or small, poured 100 percent of their heart into it, and that really translated.”

Taio’s mother, Caroline, who played Victoria, a land defender in the film, had a similar reaction. “My faith in the movie was so strong that it didn’t come as a surprise. It’s such an important story to be shared,” said Caroline. Caroline’s daughter, Kaia was also in the film as an extra.

As Deer acquires all these prestigious awards and gains immense visibility, she never loses track of why she started. “I always go back to the little girl with a big dream,” said Deer. “It’s always been the big goal, to have as many people see it as possible.”

Beans is an Oka Crisis-inspired picture, which depicted her own experience living through the traumatic time in 1990 as a young Indigenous child. “Even back then I was writing my own scripts and saving my allowance. It was my childhood dream that one day I would grow up and become a filmmaker. I would tell the story from a child’s point of view: my point of view.”

At the end of the day, she wants her creation to invoke change. “I want the film to motivate people to do what they can to make things better for Indigenous people in this country, so events like the Oka Crisis never happen again.”

Beth Janson, the CEO of the Academy of Canadian Cinema and Television, said Beans’ success comes from its multi-dimensional approach. “Beans is a film that succeeds on many levels – the script, the naturalism of the acting, the cinematography, and the very specific choices that Tracey made in the use of actual news footage. It’s difficult for a film to succeed on even one of these levels – to have it succeed on all of them is really exceptional,” she said. “But I think the thing that clinched the big win at the 2021 Canadian Screen Awards was that it tells an important story from our past through a lens we’ve never seen before.”

Janson believes there is an urgency when it comes to promoting and recognizing the importance of this time in Canadian history. “It is clear that members of the Academy were eager to have the film be seen by as many people as possible, and in turn, help usher it into its place in the Canadian film canon.”

Caroline said that observing Deer in her element was fascinating. “She’s very impressive to watch and she’s a very nice and good person,” said the actress.

When Taio was first cast, he shared the news with his friends and was disappointed with their response. “When I told someone my age that it was about the Oka Crisis, they responded with ‘what is that?’ which goes to show that there’s a lack of inclusivity in history in the Canadian school curriculum,” said the 17-year-old. “This is something that everyone should know about, worldwide.”

Caroline believes that although it’s extremely exciting, this kind of representation has taken way too long to come to fruition. That being said, she is tremendously proud of this film. “To hear our stories, to see how we live, how we laugh, how we share, it can only be positive, because it’s exposing how beautiful and rich our culture is,” she said.

Deer explained that for over 100 years people have been telling Indigenous stories cinematically and on television, and doing so very poorly and very one-dimensionally.

“They are using their imagination. They are creating, but we are not fictional people. We are here, and our stories need to reflect our reality,” she said. “The best way to do that is for Indigenous people themselves to tell those authentic stories and hold power to the narrative.”

“Whatever resistance they face, whether it’s within their immediate circle or within society, remain resilient and strong and hold tight to that dream and don’t give up. It is absolutely possible,” she said. “I’m here, and I have a best picture.”

With this film, 10 years in the making, Deer thinks the timing of its inception could not have been more perfect. “This is the time for the film to come out. With the global reckoning going on in the world, I do think people are open to hearing this story. I’d like to think it can make a difference.”