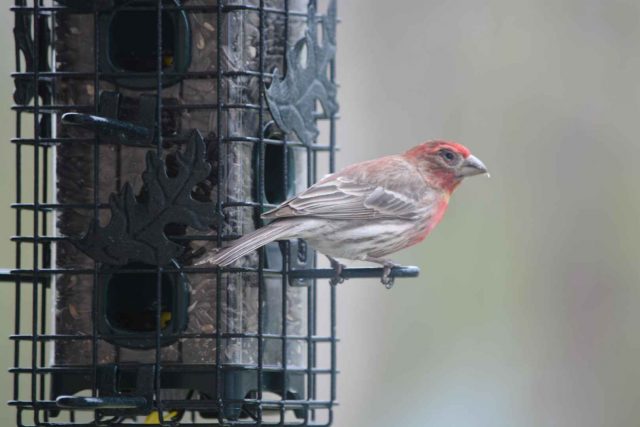 While we all continue to put our best foot forward in the fight against COVID-19, birds in Kahnawake are in a battle of their own.

Mycoplasmosis, better known as finch eye disease, is an infectious bacterial disease that affects the eyes and upper respiratory tract of birds. The infection has caused what is believed to be an outbreak within the community.

When Kahnawa’kehró:non Onawa K. Jacobs caught sight of a few birds she believed to be infected with the disease on May 5, the avid bird-watcher immediately took actions into her own hands.

“I had already known of the existence of the disease but hadn’t yet seen it in person,” said Jacobs, adding that she contacted a nearby wild bird conservation centre in order to get a second opinion. “I took my 20 bird feeders down immediately upon confirmation.”

With nine years under her belt, Jacobs knew drastic measures had to be taken; this included taking down all feeders for the recommended two weeks, discarding all the food in the feeders, extensively raking the area around them and thoroughly washing and disinfecting the feeders themselves.

“The reason for taking down the feeders is to help reduce transmission and push birds to disperse,” explained Jacobs. “This disease can spread very fast, much like conjunctivitis in humans, so it is important to keep infected birds away from one another.”

Regional director of the Quebec office for the Canadian Wildlife Health Cooperative (CWHC), Stéphane Lair explained that the handful of cases reported in the community are part of a broader increase in the presence of finch eye disease throughout the province.

“There have been outbreaks of cases observed over the last two winters, mostly in the region of Montreal and Quebec City, but we also have cases in Lac St. Jean and in the region of Sherbrooke,” said Lair. “We can deduce that this trend is happening in the overall province of Quebec.”

The regional director at CWHC pointed out that prior to two years ago, the disease had largely disappeared in the province. He explained that much like other infectious illnesses caused by bacteria and viruses, finch eye disease follows a cycle of several years, influenced by the concentration of birds.

“As the cycle progresses, the disease will cause deaths until the density of population reaches a point under the threshold line where transmission no longer happens,” said Lair. “A new series of outbreaks will begin once the cycle evolves to the stage where the population grows again.”

First recorded in Quebec in the early 2000s, this infection was linked to a significant decrease of the house finch. Although the disease does not directly cause death, the blindness caused by the infection can be responsible for starvation.

Andrew Coughlan, the Quebec program manager for Bird Studies Canada (BSC), said that the species observed in the province for the first time in the late 1970s is commonly found in specific areas. “It’s associated with suburban areas where there are more often bird feeders. It’s those that have helped the population become established,” he expressed.

Coughlan explained that the house finch populations originated from a small number of released birds, making them highly inbred and genetically weak. In fact, he reported that the species population has dropped by approximately 50 percent in certain areas where there have been outbreaks.

“They’re all very closely related, which makes the species more susceptible to the disease,” said the BSC provincial manager. “However, they have a potential to bounce back very quickly.”

As house finches bred very early in the season, Coughlan explained that the species is able to have up to three brews a year, potentially producing up to 12 offspring a year per pair.

When it comes to the feeding of birds, Lair pointed out that there are pros and cons to the practice. While feeding the animal favours the transmission of different infectious diseases, the wildlife expert explained that there are many beneficial aspects, including improved health, and additional variety of nutrients during the winter.

Ultimately, he explained, the outcome of feeding is positive.

“Though in general you should not feed wildlife, the feeding of birds is sort of the exception to the rule,” he said. “The activity of feeding birds is also beneficial because it stimulates the ecological consciousness of people, their contact with nature, so it has a positive fall back on people as well.”

This has never been more true for someone like Jacobs, who emphasized that the well-being of wildlife should always be at the forefront.

“Although it is really hard to say goodbye to our feathered friends for two weeks, it’s part of being a responsible birder and caretaker of the natural world,” she said.