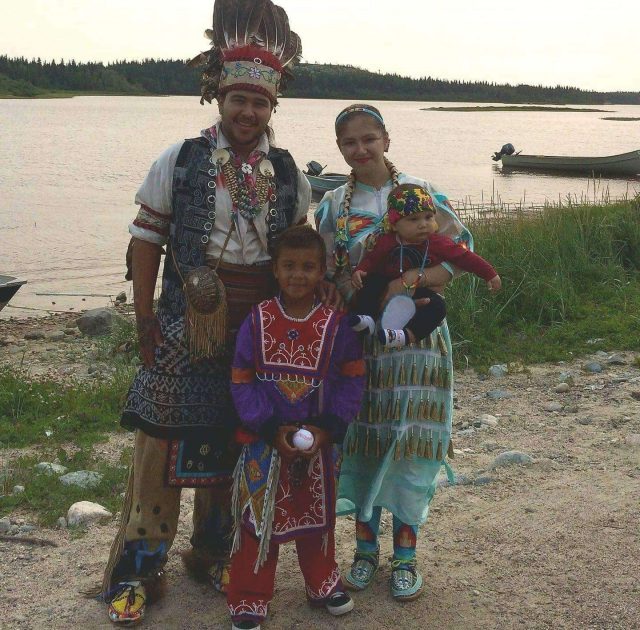 NOTE: This story has been written in collaboration with Eastern Door Reporter Laurence Brisson Dubreuil.

Leaving the community was never a thought that crossed the mind of Kahnawa’kehró:non Owen Skahionwiio Mayo.

The father of three who is currently completing a degree in First Peoples Studies at Concordia University, while also working part-time, expressed that he has been interested in Onkwehón:we ways of living since before he could remember.

Brought together at a powwow, Mayo, and his partner, Kwena Bellemare Boivin, developed the desire to raise their children immersed in the culture.

Since his partner (the mother of his two youngest), moved into the community six years ago, the family has been adamantly working to find a house that they could someday call their forever home. With limited options in town and stringent laws regarding land allotments and access to social housing, the family of four is at-risk of having to find a home away from what they know and love.

“We applied and we tried. They made us do backflips, asking us to send letters, documents, and this and that,” explained Mayo, adding that his latest application for affordable housing was denied.

While the family has been living between the Host Hotel on Route 138 and with acquaintances in the community, they continue their search for permanent housing in Kahnawake.

They recently found a place to stay short-term in town, but are hoping to get a place in Chateauguay come lease renewal time in July.

“I don’t need a handout for life, I just need a tiny, little bit of help – but at times, it feels like pulling teeth to even ask for it,” he said.

Mayo is one of the many frustrated community members looking for housing solutions within the community. The situation experienced by the family stems from a larger issue with systemic housing insecurity in Onkwehón:we communities across the country.

Judy Hughes, the senior director of the business and economic development section of the Native Women’s Association of Canada (NWAC), explained that a common theme within housing situations across Indigenous communities is the inconsistency of funding.

“They only get piecemeal financing from the federal government or local government,” said the director.

This situation is especially true in Kahnawake where homes are left uninhabited. “Units are only empty because of work that has to be done. It’s an unfortunate reality that sometimes when people leave a unit, it is badly in need of repair for some reason,” explained Gina Deer, Mohawk Council of Kahnawake (MCK) chief and the head of the housing portfolio.

Hughes, however, explained that the onus for these conditions should not be on the individuals mistreating their house, but the system that is put in place when developing housing for these communities.

“There’s so much pressure to get things built. It seems to me that people don’t really take the time to work out what they need to do in order to make it a success, because the situation is so desperate,” said Hughes.

“One of the biggest problems, even with the government programs, is that they (certain Native communities) get money to build the houses, but then they have to look to people for money to operate them.”

According to her, these additional barriers are often the result of the outside agencies that provide funding and rush the building of homes, and do not take into account all the complexity of their living and housing needs.

“With the government approach to Indigenous housing in particular – they go with a one size fits all method, and of course, that doesn’t work in a lot of places,” said the NWAC director. “We need to start getting away from being 100 percent government, and instead, look at being more self-sufficient.”

For Tobique First Nation in New Brunswick, the solution of moving towards self-sufficiency was inconceivable under the third party management that had been in place since 2007. As Indigenous Services Canada (ISC) took control of all the band’s finances, the chief and council suddenly became unable to access the funds necessary to address the ominous housing crisis already burdening the community.

Council member Brad Sappier said that as one of the leaders in charge of infrastructure and housing in Tobique, he is pleased with the evolution of the nation’s housing situation. He explained that for over 15 years, houses were not being built, partially due to the management system.

When researching how to handle their housing crisis, Sappier emphasized Hughes’ point. “In all these case scenarios, one thing that we found is the importance of homeownership. People will take care of the house a lot better if there’s a sense of ownership involved there,” he said.

The council member explained that there is an overall feeling of relief in Tobique. “We basically opened the door again for the Section 10 Housing Program, where members of the community can actually go to the bank, get a loan to build a mortgage and build their own home,” he said. “We look at free housing being over now and there’s a formula that pays for the mortgage. We’re not actually extending anymore debt to ourselves, we’re creating more housing opportunities.” He is referring to the concept that all community members that receive new housing opportunities have to contribute in whatever way that they can.

Much like in other communities, including Kahnawake, the housing committee in Tobique uses a specific criteria to select tenants, where they look at the applicant’s income, their family and work situation, and then select a specific house depending on what they can afford. If they are using social support, then the committee considers this as well, in order to find a housing option that social services can cover.

In terms of their selection process, Tobique uses an anonymous system rid of community members’ names, therefore eliminating issues of politics or favouritism. “They are given a number, their situation is reviewed by the committee and then they are selected based on the situation and not their name, which makes it a more fair process,” said Sappier.

In Kahnawake, you must be registered on the Kahnawà:ke Kanien’kehá:ka Registry to receive any services within the community. This includes having the right to apply for housing of any kind that is managed through MCK.

Boivin, who is from the First Nation of Wemotaci, has been living in the community with her partner and her children, all of whom are registered in Kahnawake. Absorbed in the culture, Boivin raised her children to contribute to a Kahnawa’kehró:non life as best she can.

“I’ve been trying so hard to teach my kids the way it is here because that’s who they are, and Kahnawake is where I want to raise them,” said the Atikamekw woman. “Sometimes I feel that this is my fault, that we can’t get a place because I’m not from here. If it wasn’t for me, maybe my kids and my partner would have a place to stay.”

Kara Paul, the general manager of Housing Programs at MCK explained that in Kahnawake, the main funding source for housing is Canada Mortgage and Housing Corporation (CMHC), a service offered by the federal government.

She explained that the council is currently waiting for an answer to an application submitted through CMHC for a program called the Rapid Housing Initiative (RHI). “We requested the funds to build an additional 32 rental units to be offered to a variety of community members. We anticipate hearing news on our proposal by this summer,” she said.

ISC spokesperson Leslie Michelson reported that $1 billion was put toward this program, which will support 4,700 homes across Canada. “Nearly 70 percent of initiatives from the projects stream serve Indigenous peoples, and 38 percent (1,800) of all units created under the RHI will be targeted to support Indigenous Peoples,” said Michelson.

The spokesperson explained that because of an overwhelming demand, funding for the entire initiative was increased by an additional $1.5 billion for 2021-22. However, Michelson was not able to provide the amount that will be allocated toward Indigenous housing.

The federal budget for 2021 includes a proposed distinctions-based investments of $6 billion over the next five years, with $388.9 million ongoing, to cover the cost of operation and maintenance of community infrastructure in First Nations’ communities on-reserve.

Although this organization is one of the options available to Indigenous communities, as the housing situation is so complex, one program cannot create a holistic solution. Sappier emphasizes the importance of creativity when it comes to the urgency of searching for housing options.

“Lift every rock and check every nook and cranny of funding options that are out there,” he said. “Don’t just rely on ISC, prepare to be a little more creative. Prepare your members to take a little more ownership in housing, as opposed to waiting in line for a free house that they might not take care of.”

Although free houses don’t exist in Kahnawake, Sappier’s comments demonstrate the variety of unique approaches each community takes with housing.

With 91 units under the social housing umbrella of MCK, Deer explained that while options are limited, council is working to resolve key issues identified.

“We see that there’s a large need for support staff within housing,” Deer said. “It’s going to be a lot easier when there is a new housing director in place.”

Until more units are created, Boivin grows increasingly worried that she and her children will have to separate from their father, as their last hope for a safe home is back in her community, located over five hours from Kahnawake.

“Wemotaci is very far from the city, there’s not much to help with their future there,” said Boivin. “There’s just a lot of opportunity for them here, as opposed to my community.”