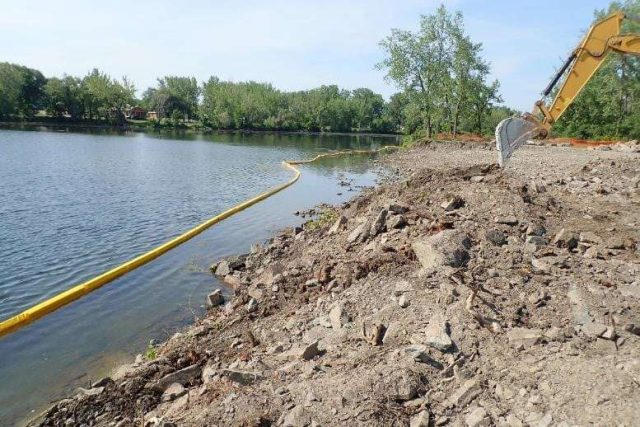 Excavation conducted as part of the project includes initial work at the beach area on July 7, 2020.

As the rainy weather slowly fades, and warmer temperatures seep in, there is a growing sense of anticipation among Kahnawa’kehró:non looking to take advantage of the different recreational features part of the ongoing Tekakwitha Island and Bay Project.

The work, picked up on April 23, is currently aimed at completing two main components of the project ahead of the summer: finalizing the beach area and the turtle nesting ground. “It’s really important that we include features that will directly benefit community members, beyond the aesthetics and the wildlife-viewing opportunities,” said Patrick Ragaz, general manager of Field Science at Kahnawà:ke Environment Protection Office (KEPO).

The impending inauguration of Kahnawake’s return to having a beach is a feature interim director of Sports and Recreation at the Mohawk Council of Kahnawake (MCK), MacKenzie Whyte said, is awaited with enthusiasm by many. “Seeing how many people were interested in the beach when KEPO started constructing it last year, we knew it was going to be a major topic of interest,” expressed Whyte.

While KEPO is responsible for the overarching project, the interim director explained that the recreation department is working alongside them on finishing touches such as the addition of volleyball courts, pole barbecues and picnic tables. “It will be a place people can go to barbecue, swim, play volleyball and just socialize a bit,” she said. “All the usual stuff that people have been starved to do for so long now.”

In order to provide all Kahnawa’kehró:non with access to these activities, the MCK unit recently purchased two floating and rolling wheelchairs that are as practical in the water as they are on the sand.

“We are doing what we can to make sure that this area will be usable by all community members,” said Whyte. “We want to build more accessibility and diversity into all our facilities.”

To facilitate more water-based activities, Ragaz explained that some aquatic plants in the bay had to be removed, as they often hinder the opportunity for different sports practiced in the bay. “The work that’s taking place for opening the dredging and the aquatic plant harvesting is really key for the Onake Paddling Club and for other recreational activity in the water,” said the field science manager.

At the same time as KEPO pushes towards building an area for community members to enjoy, the project makes headway in creating a space designed to increase wildlife; including habitats for one specific local aquatic reptile. “We have a lot of turtles in the bay, but when they come onto the island, it’s all just rocks and clay so there isn’t a lot of nesting opportunity here,” explained Ragaz.

Last year alone, the field team on site had to relocate 10 turtles that had wandered onto the work zone. Ragaz expressed that promoting nesting opportunities for turtles is only one of the project’s elements intended to enhance biodiversity.

Ragaz explained that by changing the topography on the island and increasing the velocity in the centre of the bay, the team expects the new range of habitats to attract an increased mix of wildlife both on land and in the water.

“We can’t directly increase the diversity of the animals, but we are hoping that by creating these different habitats and providing the conditions that different native populations need to strive, this will attract more fish and birds, as well as improve the turtle habitat,” explained Ragaz.

To that effect, KEPO intends to plant approximately 20,000 plants, shrubs and trees native to the area. “The idea is to increase the diversity of wildlife by incorporating as many native species as we can,” added Ragaz.

With the intention of opening the beach for the summer, Whyte explained that the department is working with the COVID-19 Task Force to properly enforce health directives.

“We are going over rules for capacity to make sure everything is socially distanced and that we have the correct limit for the number of people,” she said, adding that three lifeguards are expected to be hired ahead of opening.

Until construction concludes and temperatures peek, Whyte said community members have a naming contest for the beach to look forward to in the coming weeks. Let’s get brainstorming!