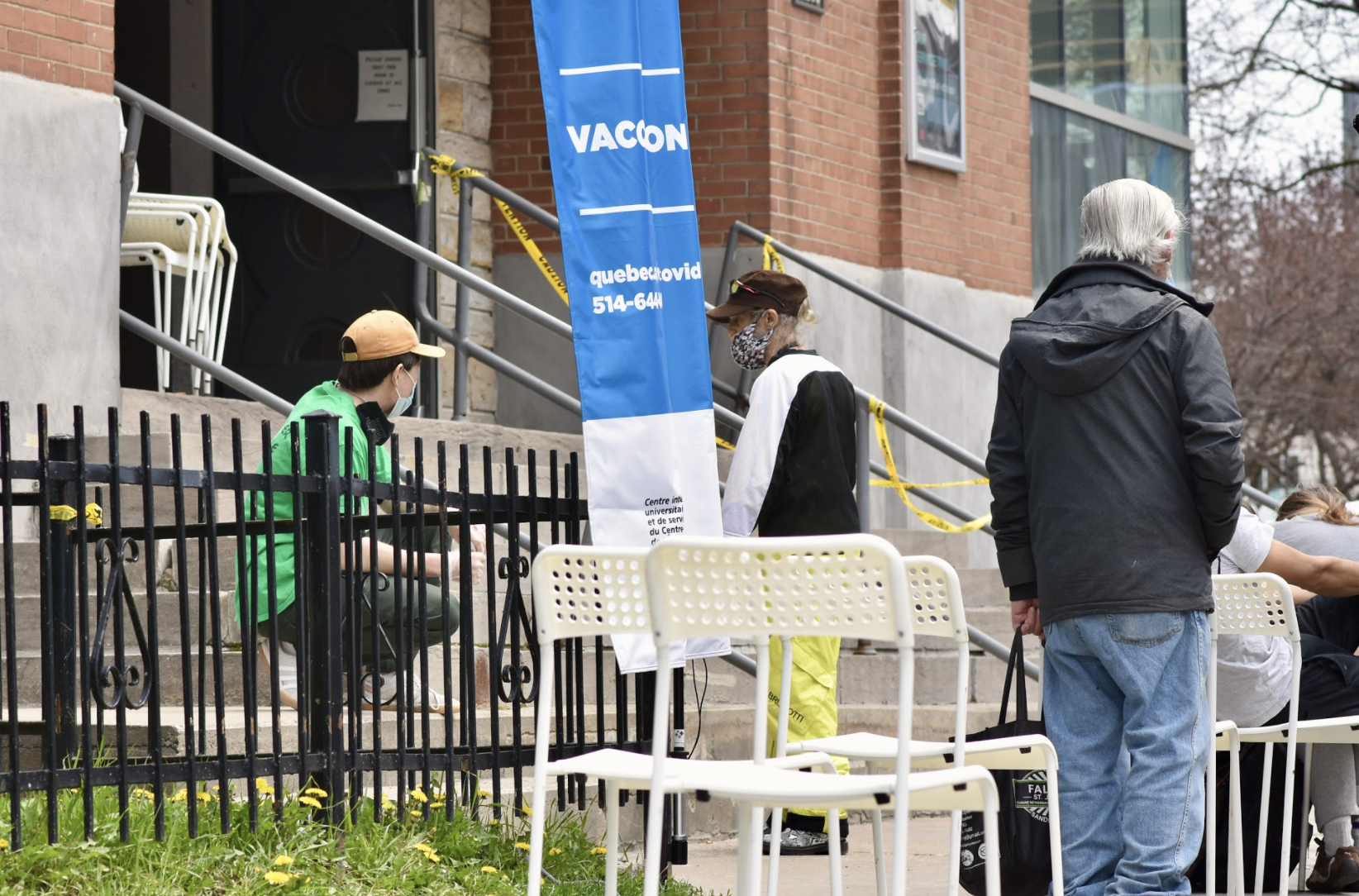 Resilience Montreal worked alongside Montreal’s public health to hold a vaccination clinic for the unhoused population on Wednesday, April 28, at the Pentecostal Church located across from Cabot Square.

Since the beginning of the pandemic, the homeless population in Montreal has been confronted with more obstacles than ever before. In Cabot Square, a site in the city’s downtown area, the overrepresentation of Onkwehón:we without a roof over their head is made all the more evident.

From insufficient access to vital resources, an inadequate vaccination distribution plan, and short-sighted regulations such as stringent curfew hours, the Indigenous unhoused community has had to depend on the support of organizations and the generosity of volunteers in order to survive.

In the past 10 days, the efforts of these actors not only allowed to prolong the stay of the warming tent in the Square, but has also made it possible for members of the community to obtain their second vaccine.

However, as executive director at Resilience Montreal, David Chapman, explained, the vaccination clinic set up across the park on April 28 did not come without its own set of conundrums.

“Part of the challenge is that we are continually adapting to changing conditions, and one of those has been knowing how many vaccines are going to be available on any given day,” said the director of the shelter.

“We actually had to adjust our strategy throughout the day to make sure we didn’t have a pile of people waiting to get the vaccine, and ending without a dose to give them.”

According to Chapman, public health was meant to provide 96 doses for the drop-in clinic. Yet, he explained that the one-day campaign ended early in the afternoon after all 72 vaccines supplied had been administered. “We had no trouble using them all and we still had more people who wanted the vaccine in the end,” he said.

While the drop-in approach is best adapted to the community’s needs, the director said that an agreement was reached with local health authorities to allow those who didn’t receive their dose to do so at the Palais des congres. “At any given time, they can go to that large vaccination centre downtown and get their shot,” he said, adding that no appointment or piece of identification will be required.

With approximately 250 people coming through Resilience Montreal every day, Chapman stressed the increasing need for services in the area. “We’re a low-threshold service, meaning that we welcome in anyone, whether they’re under the influence, or even if they have a pet, for example,” he said. “A concerning trend we noticed is that our numbers have been growing steadily during the pandemic.”

The increasing demand in services from the primarily Indigenous unhoused population frequenting Cabot Square is in part behind the push to keep the Raphaël André Memorial Tent open for longer than the initial May 1 deadline set by the city.

Announcement of the tent closure sparked outrage among those involved with the temporary shelter named in honour of 51-year-old Raphaël Napa André. In early February, the Innu man was found dead, steps away from a shelter ordered to close by public health officials. In a meeting with mayor Valérie Plante on April 21, some 20 organizations and individuals involved in community-led projects were invited to present their concerns to the city.

Among those present was the executive director at the Native Women’s Shelter of Montreal, Nakuset, who said that she and others argued that the tent should remain open. Although Plante was supposedly receptive to the comments, Nakuset explained that after a period of complete silence, organizers had no choice but to request an extension.

“The mayor is someone who often says ‘no one gets left behind,’ yet, we all know that on the 18th, those people will be left behind,” she said.

When the tent opened its doors on February 2, the director said she was amazed at the outpouring of support coming from people everywhere, including in Kahnawake. “Most of the staff that run the tent are from Kahnawake, and on top of it, we have all these organizations that bring donations of food and everything else needed,” said Nakuset.

Community member Mary Goodleaf is one of the many Kahnawa’kehró:non to have volunteered her time to help with the tasks involved in caring for the tent. Like many others in Kahnawake, Goodleaf said she could not stand idly by after hearing the heart-wrenching news of André’s death.

“For some people, going to the shelter is all that they have,” she said. “I help, but it’s really the people that are on the ground, working in the tent, that make it a community and a safe haven for the population there.”

Throughout the months during which the tent has operated, Nakuset reported over 8,350 individual visits. These were among the statistics that she shared with the city officials while pleading the case.

“If you have all the statistics and if you know that there’s clearly a need, but that you chose to do nothing, well that’s a problem,” said the director. “That’s when you’re allowing people that are desperate to continue to fend for themselves.”

Although an approximate $200,000 was collected in recent months to install and operate the tent, Nakuset emphasized the urgency for sustainable housing options.

Provincially, Quebec Indigenous Affairs minister Ian Lafrenière is also advocating for more tangible and permanent solutions to the lack of services available to unhoused Onkwehón:we in the city.

“There are shelters that exist in Montreal, organizations to welcome them, but it’s not every person who can go to these different places,” expressed Lafrenière. “Whether this is due to consumption, addiction, or anything else – to say that there’s enough space in shelters and that everyone can rely on those, is just impossible.”

As a direct response to the situation, the minister reiterated his commitment to open a permanent overnight shelter to accommodate the population in and around Cabot Square.

“We have been working with Resilience Montreal on this file to find a solution that is pragmatic,” he said. “The tent was a punctual project and I believe we need to solidify more permanent solutions.”

Goodleaf, who is a member on the board of the initiative for this shelter, said that until the project comes to fruition, Kahnawa’kehró:non remain committed to helping in any way they can.

With community members participating via volunteering and donations, restaurants are doing their part by providing hot meals for those who frequent the tent. “It’s incredible to see how caring the community is in these times to help others,” she said.

In addition to these efforts, it was announced yesterday that the Food Security Initiative, on behalf of the annual Karonhiaráhstha’s Winter Wonderland charity, will be initiating a project called “Sharing the wealth of responsibility.” The aim of this project is to keep the community engaged through collective initiatives.

“To see all the good people in the world that want to go out and help, and to see that so many right here in our community, this makes me even more proud to live in Kahnawake,” said Goodleaf. 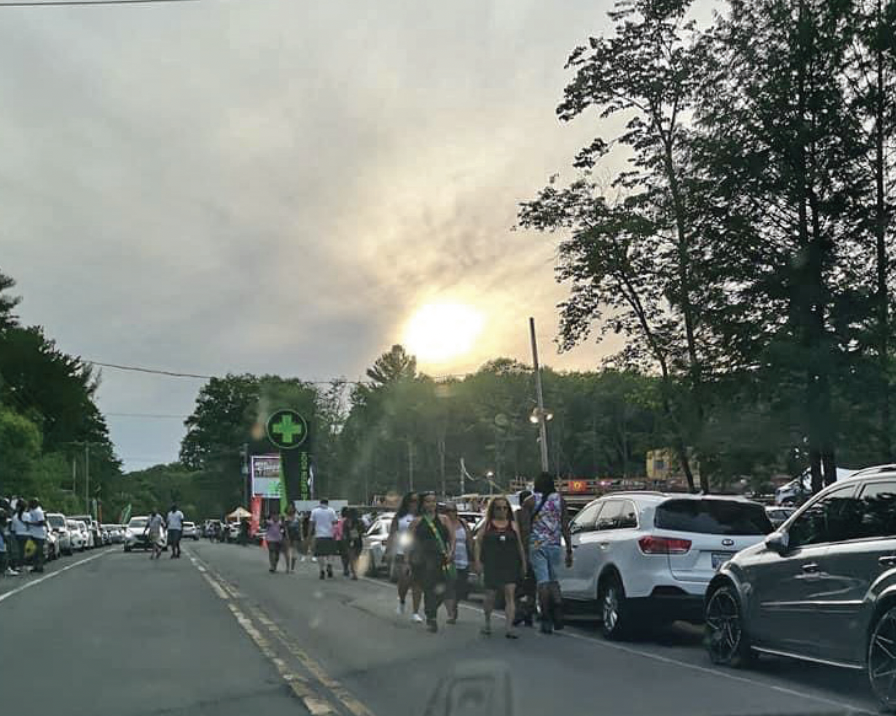