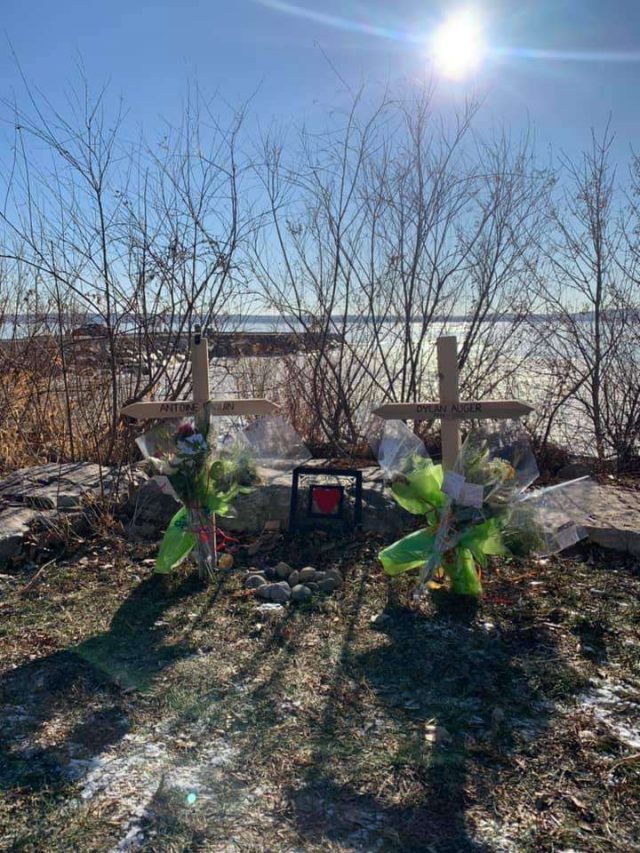 As the ice on the Lake of Two Mountains melted, the Sûreté du Québec (SQ) was able to resume the search operation of two fishermen reported missing in mid-November of last year. Ten days into the resuming of the search, the body of Dylan Auger was found in a dam, by Laval police.

“We’re talking about approximately 50 KM from where the person was last seen in St. Placide, versus where the body was finally located,” said SQ sergeant Marc Tessier. “There was a helicopter search conducted over two days afterward, between the two points.”

However, Tessier confirmed that the search for the body of the second victim, Antoine Paquin, is still ongoing.

“With the current and the temperatures of the water, it’s hard to predict where the second person will be found,” explained Tessier. “It doesn’t mean that because one body was found in a certain area that the second will be there too.”

It was around 9 p.m. on November 14 that the two 22-year-olds from Mascouche were first reported missing. The pair, described as inseparable, had made their way onto the lake near Kanesatake for a fishing trip.

“When the police arrived here on the night of April 19, it was the confirmation of an expectation we had had for five months and one week,” said Dylan’s mother, Judith Besner. “It hurt more than the day of the disappearance because now it became concrete – I no longer had my one and only son, the love of my life.”

The day after the disappearance of Dylan and Antoine was reported, their boat was found empty and submerged on the shore close to the Kanesatake First Nations Paramedics (FNP) building.

Upon hearing about the harrowing event in the fall, the Emergency Response Unit (ERU), the FNP and several community members, joined volunteers organizing searches to help find the young men.

ERU spokesperson Robert Bonspiel expressed that the Kanien’kehá:ka community remains committed to the cause of assisting the families through these painful times.

“Our thoughts and prayers remain with both the families,” said Bonspiel. “We really hope that they can all find closure in this terrible ordeal, and that they eventually find peace, somehow.”

As the grieving mother mourns the loss of her child, Besner said that she is adamant to continue to help with the search for her son’s friend. “Until we find the two of them, we are still missing 50 percent of the work,” she said. “It’s important that people know that Antoine still hasn’t been found, so that they continue to look for him.”

While families, friends, and volunteers prepare to conduct their own searches, there are no short-term plans for the SQ to resume their operation. “If we have new information, then we will send the helicopter out again, as well as a team of divers,” said Tessier. “But as of now, we can’t indicate when searches will pick up again.”

Besner explained that to find her son like this is an inexplicable wound that could never be fully healed, especially on its own.

“We were explained that the loss my spouse and I experienced is one of the biggest traumas that exists,” she said. “We can’t hold a grudge against Mother Nature, so it’s with the guidance of therapists that we are relieving the pressure and anger that is inside us.”

Both Besner and Dylan’s stepfather, Éric Labrecque, said that they have been using nearly every service available to them, in order to come to terms with the heart-rending reality.

“We have a doctor, a psychologist, and an intervention worker because as parents, the load of pain is too heavy for what we can handle,” said Labrecque. “Dylan was a nurse in psychiatry, and the message I believe he would want to share is to never hesitate to ask for help.”

Along with the words of encouragement comes one rooted in caution. “Water is the most capricious thing that exists,” said Besner. “We hope that people will be more sensitized to the existing risks and that they will be more careful.”

Well acquainted with the dangers posed by the unpredictable element, Bonspiel expressed that vigilance is of the utmost importance on the water.

“We continue to give information to the community to encourage people to do things the proper way, that includes water safety,” said the ERU spokesperson. “We are hoping that this tragic event, and events like this, never repeat themselves.”

Dylan’s parents expressed that the support extended to them since the incident reinforced their belief that with solidarity comes strength – an emotion that Kanehsata’kehró:non know all four parents will need as the work to find Antoine continues.

“Throughout this tragedy, we were able to get to know the people in Kanesatake,” explained Labrecque. “They took such good care of us and we want to thank every single one of them for all that they did. Through everything that happened, it was very touching for us all.”