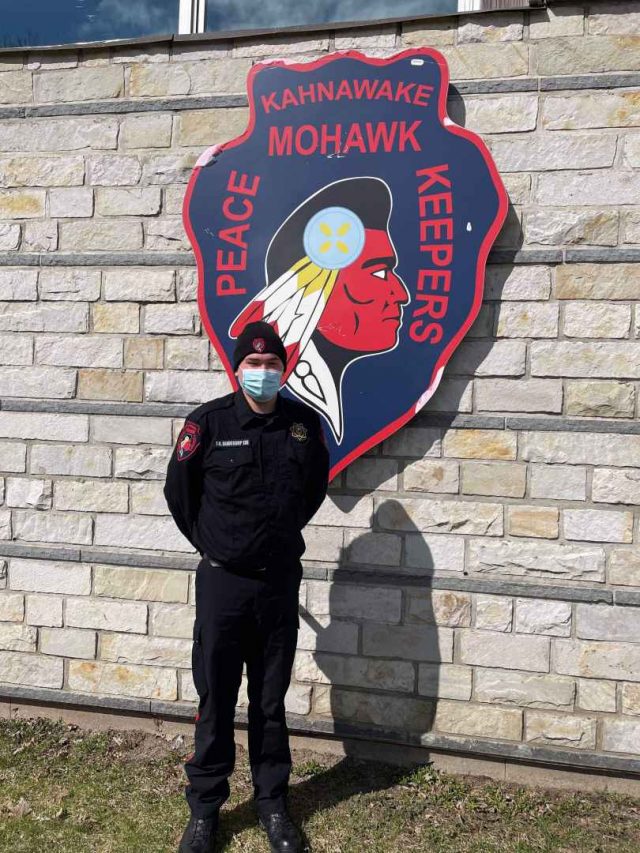 The ceremony marked the start of Beauchamp’s career in law enforcement, an aspiration he has had since he was a little boy.

“My mother told me that ever since I was five-years-old, I wanted to be a policeman,” said Beauchamp.

The 25-year-old said that his decision to join the Peacekeepers has everything to do with the community.

“I am community and family-oriented, and Kahnawake is basically one big family. I want to help people as best as I can to the best of my abilities, and I just felt that becoming a Peacekeeper would be a great way to do that,” he said.

Being a positive role model for the youth was another motivation, said the new officer.

Having a few family members and friends on the force that he looked up to in his youth also inspired him to pursue that career path.

“My cousin’s father was Peacekeeper Daryl Paul, and I was around him a lot. I would pick his brain, and ask him questions. I got to see him in uniform and I got to see the squad car. I always thought it was the coolest thing ever,” said Beauchamp.

Beauchamp also remembers working with Jimmy Jacco, who is now an investigator at the Kahnawake Peacekeepers, at a gas station when they were younger.

“I remember when he first signed up to go to the RCMP Academy, and he was just elated that he was going, and he wouldn’t stop talking about it.

“It got me amped up, and I remember telling him that one day I would become an officer of the law and go to the academy and become a Peacekeeper as well,” he said.

Officer Beauchamp finally decided to apply to the Peacekeepers last year. The process included an interview, a background check and other types of evaluations.

“The key is to be interested and knowing that it is really what you want to do, because the training itself is really a grueling process,” he said.

The next step in the application process is an interview with an RCMP agent at the Montreal headquarters.

All candidates are then required to pass the Physical Abilities Requirement Evaluation, which Beauchamp called “very challenging.”

Applicants need to be in good physical shape and be physically and mentally prepared, said the officer.

“Then you get a letter stating that you are going to the RCMP Depot academy in Regina. I had never been that far west, so that was quite an experience,” said Beauchamp.

The program is 26 weeks long.

Beauchamp left Kahnawake in March 2020, right when the pandemic had just been declared. He was at the academy for only two weeks before he was sent back home.

“That was an experience in itself. Being home for eight months, I had no idea when I would be going back,” he said.

When he finally returned to the academy, he said the training was very demanding and that cadets are lucky even to get five hours of sleep a night.

He said that, in a way, the pandemic and safety measures made being away from family and friends a bit easier and called it a blessing in disguise.

“The hardest thing was missing my dog,” he said with a laugh.

Over the last few days, Beauchamp has received many messages from family, friends and fellow community members who are really happy to have him looking out for everyone.