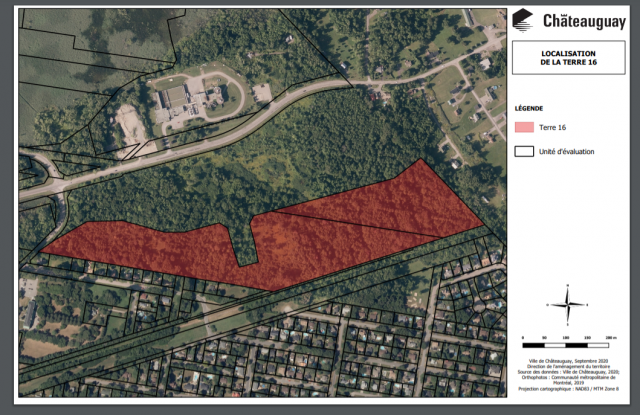 A housing development project in Chateauguay that borders Kahnawake will move forward after the city council approved a necessary zoning change on March 15.

The project, which will have 290 housing units, will be directly adjacent to Parcel E, located at the very end of Old Chateauguay Road (OCR), heading towards Chateauguay.

The Mohawk Council of Kahnawake (MCK) has already expressed certain concerns related to the development. The issues can be traced back to 2018.

MCK chief Gina Deer said that she and chief Ross Montour had previously met with the mayor to follow up on some of the problems, and discussed the ambiguity of the project.

“We wanted to let him know that Council had a discussion, and we were not in favour of the project at this time, due to the lack of information,” said Deer.

Deer said that some of the concerns include increased traffic and the environmental impact, including flooding that occurs in both communities.

“There is also the odour issue. We brought to his attention the sewage plant that is located at the end of the OCR.

“The community members of Kahnawake that built homes close to that sewage plant cannot open their windows or put laundry on their line because of the stench that comes out of there.

It is extremely strong and horrid in the summer months when it is really hot,” she said.

She added that the mayor was receptive to the MCK’s concerns and that so far, the dialogue has been productive.

“We are having some follow-up meetings regarding some of the concerns, but there are studies that are going to be done before that area is developed,” said the chief.

According to Deer, MCK offered to be included in some of the studies in order to see the impacts of the development.

For his part, the mayor said that he felt really good about the zoning change approval and wants to continue to have an open dialogue on the project with the MCK.

“During our latest discussion, we have decided that we would have some sort of study or odour analysis. The community of Kahnawake expressed concern over the odour,” said Routhier.

According to the mayor, although the zoning change was approved, no permits have been issued, nor will they until a formal analysis is completed.

“I have sent a message to our civil engineer, and I gave a copy of that memo to chief Tonya Perron,” he said.

“They (MCK) will participate. We will be selecting the firm that will do the analysis, but I want the firm also to analyze the wind in the area of Kahnawake,” explained Routhier.

In terms of increased traffic, Routhier said he has already asked for the project to have a street with a roundabout instead of coming out on Robert Street. So that way, all of the traffic will be directed to Maple Street.

He would also like to have Maple Street stretched into four lines so it becomes a boulevard.

“If the analysis shows some problems – If I am still the mayor then – I will let people know. I will not ask people to invest $300,000 or $400,000 in houses and, after they settle in, realize that it’s really tough on them to live there. The odour situation will be known,” he said.

Moreover, the mayor has his own inquiries regarding what Kahnawake plans to do with its land in that area.

Deer previously said that Council does not have an answer to that question yet.

“I want to make sure that both of our communities will do everything to maintain the good rapport that we have right now,” said Routhier.