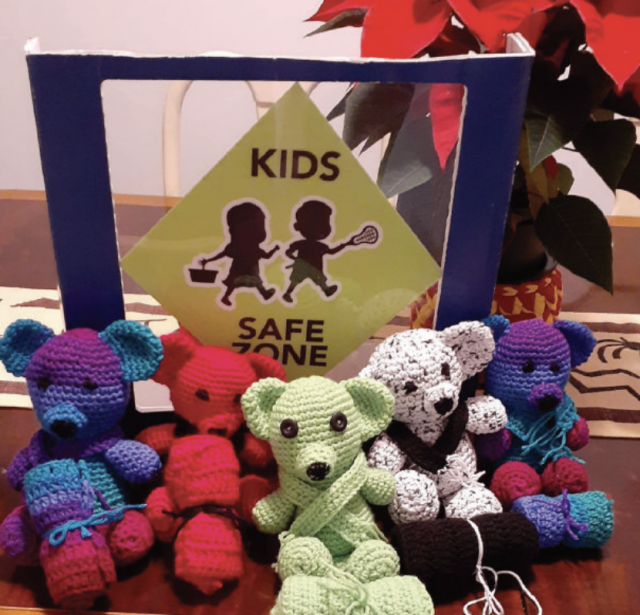 In June 2019, community member Tammy Whitebean teamed up with the Kahnawake Peacekeepers and started the Kids Safe Zone. The goal of this initiative is to keep kids in the community safe, by designating certain houses a safe haven, in case of emergencies.

“I asked the Peacekeepers if they wanted to participate, and they agreed. Assistant chief Peacekeeper Jody Diabo is amazing. She worked with me every step of the way,” said Whitebean.

In order for a house to be designated a “kids’ safe zone” every member of the household that is over 18 must undergo a background check.

Once the background check is complete and the application is accepted by the Peacekeepers, they advise Whitebean, who then adds the household to the list.

“I also provide the household with a sticker and green light bulb that is plugged outside and identifies the house as a safe zone,” she said.

Whitebean said that the idea behind the initiative came after reports came out about kids being followed in the community a few years back.

“A lot of non-locals were travelling through the territory. It was a scary situation. People were posting on Facebook about their children being followed.

“And it also happened to my daughter at the (Mohawk Council of Kahnawake) apartments. She ran and hid in a playhouse. After that, I knew something needed to be done. The fear of that was enough,” said Whitebean.

Last year, the mother of five received the 2020 Lori Niioié:ren Jacobs Memorial Recognition Award for her dedication to her community and volunteerism.

Whitebean, along with the Peacekeepers, visited the schools in the community and showed the children the sticker that identifies the houses to find shelter there in case of an emergency.

“The community really responded to the initiative. There are about 47 homes that have the sticker on their windows. The Peacekeepers will also be adding them to the Emergency Location Mapping system,” she said.

Whitebean has also volunteered at the Kahnawake Fire Brigade for years and is part of the Residential School Monument.

“I feel good and proud that people want to register as a safe home. To see people stand up and do what the community needs to, to make sure that the children are safe is great,” said Whitebean.

The avid volunteer has also added a new component to the Kids Safe Zone – beautiful, crocheted bears to comfort children that may come into contact with the Peacekeepers.

She has made and donated a dozen since December. She named the bears “Booney,” her youngest son Tehaianon:ni’s nickname.

“I noticed that there were a lot of things happening because families were stuck in the home because of COVID-19. And children are not being able to go out and socialize, so I asked myself what I could do and decided to crochet bears,” she said.

Kyle Zachary, Public Relations officer at the Peacekeepers, said that they keep a small collection of stuffed animals at the police station for exactly these types of situations.

“We’re extremely grateful to Tammy Beauvais for this donation,” he said.