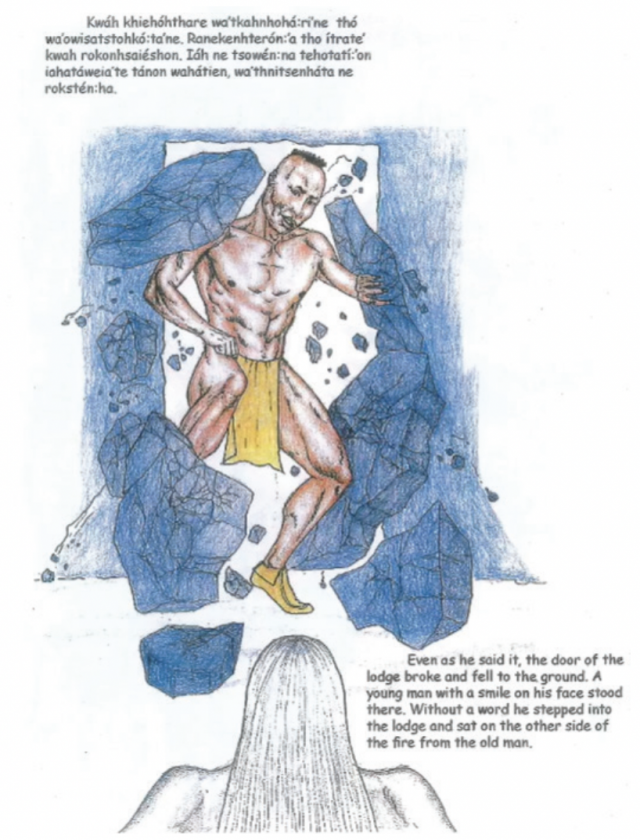 The stories were chosen to help the transition from winter into spring.

One of the most cherished memories among Onkwehón:we people is story time. Whether it was done around a fire, hidden away from suspicious parents, tucked in bed, or even as grown adults now unafraid of the dark, storytelling has always held a special place in the heart.

From March 22 to March 26, an initiative in Kanesatake aimed to bring that magic back, while adjusting to modern times. The Kanesatake Health Centre (KHC), in partnership with Tsi Ronterihwanónhnha ne Kanien’kéha Language and Cultural Center, presented Tewaká:raton, meaning storytelling in Kanien’kéha. While the community has been proactive in promoting its language, the online event was a first.

The man behind the idea, Wenhni’tí:io Gareau from KHC, wanted Kanehsata’kehró:non to feel comfortable around Kanien’kéha because it’s “beautiful and it’s theirs.”

“Storytelling was such a big part of our culture before televisions came into our houses,” said Gareau. “Not too long ago, children would gather before they go to bed and be told all kinds of stories. Often the storytellers would make up stories on the spot.

“When the kids would go to bed, the adults would continue into the night, trying to one-up each other with stories that were funnier or scarier than the next.”

For the initiative, the cultural center donated 45 packages of the five books selected for Kanehsata’kehró:non who registered for the event. Every night, at 7:30 p.m. when the sun had completed its descent, Gareau went live on the KHC Facebook page and read stories that resonate with, Gareau said, “Tewéntia’ks, as we say, the time between seasons, stories to fade from winter into spring.”

“It’s a big part of our identity as Onkwehón:we and it’s a very important mechanism used to transmit history, cultural values, language and identity,” he continued.

Gareau said he believes Kanesatake is at a point where it is critical to reacquaint itself with the language.

“The more we can re-accustom ourselves to hearing Kanien’kéha, the more we will feel comfortable around it,” he said. “Our language belongs to us all and we, in turn, all have a responsibility to our language.”

Gabriel’s young daughter was nearby, listening as she took her bath. Gabriel might not be fluent in Kanien’kéha, but she said she’s been exposed throughout her life to her community’s language enough that she understands simple conversations.

“This method of learning helps me confirm the pronunciation of words that I may have been pronouncing the wrong way when I read the books on my own,” said Gabriel.

“Participating at the time of the recording allows for a deeper connection to the teacher as well. The fact that it is recorded and saved on the Facebook page allows me to treat it as a handy resource when I practice reading the book over a day or two later.”

While Gareau said he feels like Kanien’kéha is still in the shadows here in the community, the great feedback and encouragement he’s been receiving from the initiative give him great hope for the future of the language.