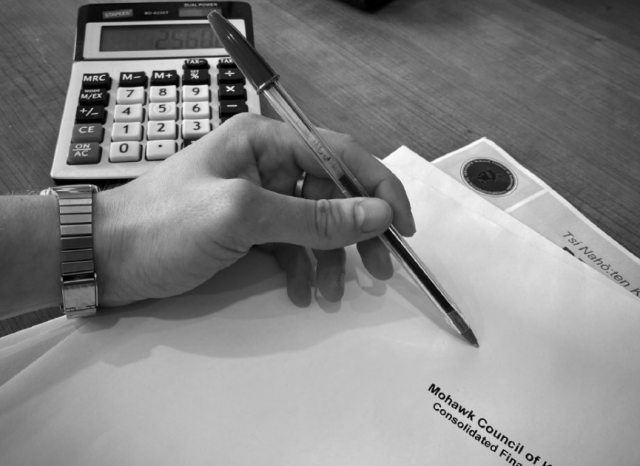 The Mohawk Council of Kahnawake (MCK) will be releasing its annual budget next Wednesday, March 31, the last day of the fiscal year.

MCK chief and lead of the Administrative Affairs portfolio, Mike Delisle Jr., told The Eastern Door that a press conference will be held to present the 2021-2022 budget.

“It has been a challenging year as the community is well aware because of COVID-19,” said Delisle Jr.

“We have had to change some of the ways we spend money for operations and administration on behalf of the community,” he continued.

The chief said that there had been major challenges in terms of having Canada meet some of the conditions requested by Kahnawake regarding federal funding.

“There are still a couple of outstanding political issues that are trying to be addressed through the Finance and Administration Department, and if they are not, they will be taken to the political level,” said Delisle Jr.

He explained that the first 10-year funding agreement with Indigenous Services Canada (ISC) is coming to an end on March 31. The MCK has requested a year extension because they found some of the wording in the agreement to be problematic.

Council is hoping to resolve those issues in the coming months, to then enter into a new 10-year grant agreement with the federal government.

In 2020, the government of Canada introduced new funding agreement models for the provinces and territories, including Indigenous communities.

The funding agreement models were streamlined to facilitate a single agreement for all programs and funding from both ISC and Crown-Indigenous Relations and Northern Affairs Canada.

“When we say operational deficit, it means that what we projected last year in the budget was exceeded. It’s a small amount, and it will not impact services to the community. The majority of it was due to COVID-19,” said Delisle Jr.

The MCK will take that money from its operational reserve, which was set up decades ago for reasons like the COVID-19 pandemic.

“If, in fact, we were ever in deficit, we would still reach zero balance going into the budget (because of the operational reserve) and eventually the audit to show that we are fiscally responsible,” he said.

These two major components will be reflected in the new budget in terms of the challenges encountered in the past year. The presentation will also address the challenges that MCK will face moving forward in the coming year.

“There have been significant impacts through monies that needed to come from Canada as well from internal sources that went to the KERM (Kahnawake Emergency Relief Measures fund) and BIF (Business Interruption Fund) to assure the community remains safe.

“Also, not to further burden individuals and businesses, and making sure that we will come back stronger than before,” said Delisle Jr.

As it does every year, the budget increased again through negotiations that were done by the Finance and Administrative team at MCK, he said.