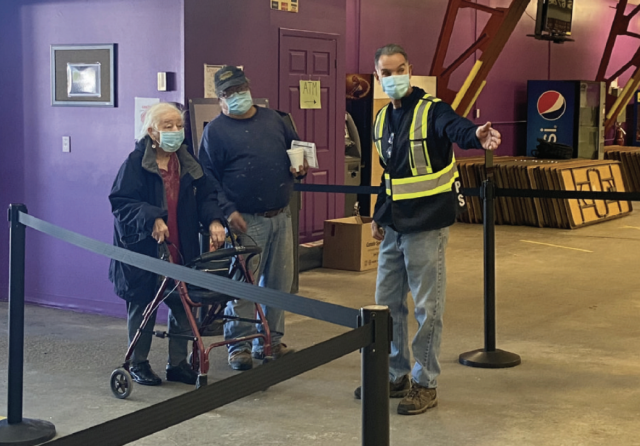 A light at the end of the tunnel. That is what many in the community who have received the first dose of the COVID-19 vaccine have expressed online.

And according to the Kahnawake COVID-19 Task Force, the mass vaccination process is going really well. “We are happy, to date, with the community response, and we hope it maintains the same,” said Task Force lieutenant Lloyd Phillips.

Task Force member and executive director of the Kateri Memorial Hospital Centre (KMHC) Lisa Westaway shared the same sentiment, and said that thus far, there were only a few minor glitches on the online booking system, which have now been resolved.

“If people are having any difficulties booking, we ask them to please keep trying and be patient, because their time is coming. We want to get as many people as possible vaccinated over the next couple of weeks,” continued Phillips.

As of Wednesday night, there were zero active cases in the community. Westaway explained that although they continue to test at KMHC’s testing site, they are now down to five to 10 tests per day.

On Monday, the community received its second shipment of the Moderna vaccine with a total of 3,700 doses.

“As of yesterday (Tuesday), we have vaccinated 2,217 people. We are looking to add 250 or so today (Wednesday),” said Phillips.

In fact, Phillips said that the Task Force is working to increase the number of vaccinations from 250 a day to 300.

The Task Force is also currently working on a special process to vaccinate cross-border workers and students.

The process was put in place because of Directive 58, which requires people to quarantine upon crossing the border unless they are exempt.

“Our availability is very limited, but we certainly want to get those who are not exempt vaccinated. We are going to coordinate a way in which they can still be vaccinated at the site, but done in a different manner than the general population,” the lieutenant said.

He said that the details are still being worked out, but the Task Force wants to make sure that they can get vaccinated.

“Starting tomorrow (Wednesday), we will be vaccinating a small group of people who really can’t get to the vaccination site,” said Westaway. “At their home. It’s the AstraZeneca vaccine, so we will have used all three vaccines in the community.”

Westaway addressed the concerns related to the AstraZeneca vaccine, but said that Quebec actually received a different vaccine, the Covidshield vaccine, which is developed by Oxford-AstraZeneca and manufactured in India.

“It is not at all the same lot number as the cases that people have heard about in Europe. The other element to think about is that these are 30 cases over millions and millions of doses administered of AstraZeneca vaccine across the world,” she explained.

As of now, it is hard to declare determine why certain batches of the vaccine causes blood clots, as this is a common development, and although there may be a correlation, we can’t jump to a firm conclusion, according to Westaway.

“Additionally, there is the extensive medical analysis of risk that Quebec has done and has prompted them to continue to use the vaccine here, and to state that it is a safe vaccine,” said Westaway.

AstraZeneca is currently the only COVID-19 vaccine that can be used for patients that are homebound, since more Moderna or Pfizer cannot be moved.

In terms of the second dose, the executive director said that it remains at 112 days after the first shot, based on recommendations by the Quebec Immunization Program and efficacy levels.

“As we know, they are doing live data analysis after the first dose, and they see that efficacy does not decrease within that period.

“It was a gamble that Quebec made because they did not have the data to support their decision when they originally made that decision, but their gamble seems to be paying off,” said Westaway.

The rationale behind that decision was to vaccinate before the variants start taking over. Moreover, other countries have started following suit, according to Westaway.

As more and more people in the community get vaccinated, the Task Force has begun to revise the various safety and health measures currently in place.

“We don’t want to put any definitive timeline on it yet because there are still many unknowns. How many people will be vaccinated is one. What is happening around Kahnawake has always been a concern,” said Phillips.

He also cited worries related to the increase in variants in and around Montreal.

“We have to keep the focus on what the threat is. We want to look at a timeline that we can start gradually loosening measures for allowing gatherings, for example. We have no fixed day yet, but the assessment has started,” said Phillips.

All of these developments are positive and give people a sense of hope that we are moving in the right direction, but the Task Force acknowledged that the mental health of the community remains a big concern, and more work must be done.

“Measures have been taken by the Task Force and KSCS (Kahnawake Shakotiia’takehnhas Community Services) to try to address that as best as we can, and more work will continue on that front,” said the lieutenant.

However, Phillips is still optimistic and believes that a combination of several factors, including the vaccine rollout, the spring, and people being able to be outside longer, have provided some comfort to community members.

“But we also have to understand that the impacts from the past year and the ongoing pandemic still need to be addressed in a very serious manner,” explained Phillips.

Last week, the Task Force announced that doctor Annick Gauthier would be stepping away from her duties as the medical advisor to the Task Force and refocusing her energies on her patients at KMHC.

“We are really thankful that she worked with us throughout the year. Her contribution was significant and very appreciated. She was instrumental in providing us information that allowed us to make good decisions for the community,” said Westaway.