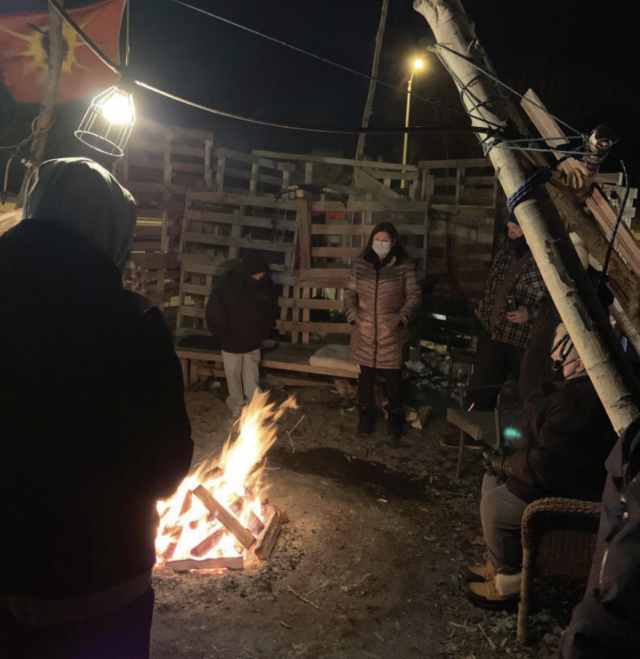 Last Friday, the Kahnawake Peacekeepers arrived at a residence on Clay Mountains and found an unresponsive male. Subsequently, Christopher Cass, 31, was pronounced dead from an apparent drug overdose.

The news quickly spread, sending feelings of shock and despair throughout the community.

Constable Kyle Zachary, the Public Relations officer for the Kahnawake Peacekeepers, said that the file is still under investigation.

The tragedy prompted the community to call a meeting at the People’s Fire in the green space, off of Highway 132.

Over 40 people gathered on Sunday evening to discuss the ongoing issue related to substance abuse in the community.

Many people expressed anger, frustration and fear over the devastating incident.

“There has been a drug problem in the community for as long as I can remember,” said community member Timmy Norton, who attended the meetings.

Still, the news was shocking and disturbing for Norton, who is a recovering alcoholic and drug addict.

“I know where this person was coming from, with this sickness, and on the other side, there is the family who lost somebody to an overdose. It is really tough,” he continued.

According to Norton, tensions were high during the discussions, with some people suggesting evictions as a way to rid the community of drugs and dealers once and for all.

Ultimately, the community came to the conclusion that rehabilitation was a better solution, after others in the crowd recounted their experience with substance abuse, mental health issues and recovery.

“On both nights, after the discussions, the collective decided to go by the house where the young man passed away to let the family and neighbourhood know that we support them because many who live there are afraid,” said Norton.

The Peacekeepers were also present during the meetings to listen, as many stressed that there should be more police presence in the area of Clay Mountains.

Mohawk Council of Kahnawake (MCK) chief Ross Montour assisted the meetings and said that there are concerns that there aren’t enough officers to sufficiently cover the community’s needs anymore.

“One of the things we talked about was putting together a sub-station for Peacekeepers on that side of town,” said Montour.

“We cannot open investigations and set up surveillance wherever and whenever we want. We need reporting persons to come forward and provide statements on what they know,” said Zachary.

“So, if people want to see results, they need to provide us with a strong foundation, so our investigations unit can build up a strong enough case,” he continued.

Nancy Worth, the clinical supervisor for the Addiction Response Team with Kahnawake Shakotiia’takehnhas Community Services (KSCS), said that they have seen an increase in relation to drug abuse in the community.

“The increase in drug overdoses is not specific to Kahnawake, and it is being seen across the country. Some provinces are reporting a higher number of deaths related to overdoses than to COVID-19,” said Worth.

“We do know that there is a higher risk for people to find unhealthy ways of coping, such as drug and alcohol abuse in this difficult time,” she continued.

KSCS’s Addiction Response Services have continued to assist people in need during the pandemic, but the COVID-19 restrictions have put barriers on access and availability of services outside of the community.

However, Worth stressed that they can still refer people to in-patient treatment outside of the community if necessary.

“The Addiction Services continue to provide support and counseling to family and friends of people that are struggling with substance use disorders and mental health issues,” said Worth.

But there is currently a waiting list because the demand has been so high, she said.

“The pandemic has really affected everybody, but I think it is also fueling a different type of crisis as well with substance abuse and mental health,” she said.

She said that there are different reasons why there has been an increase in overdoses across the country, including the quality of the drugs, and people not being aware of what they are actually using.

“We are seeing more drugs that are tainted with fentanyl and benzodiazepines. We need to focus on safer use for the people who are going to continue using,” explained Worth.

Moreover, she said that people need to have access to naloxone, a fast-acting drug used to temporarily reverse the effects of an opioid overdose. It can restore breathing within two to five minutes, according to Health Canada.

“People need to get their kits. They are free. You just have to provide your Medicare card at the pharmacy, no questions asked. And it could save a life.

“Because of the restrictions, people have been isolated, which also means there is nobody watching each other if they are using,” she said.

MCK working on a solution

On Wednesday, the MCK released a statement addressing the issue and said that the chiefs had committed to working directly with community members and organizations to develop a strategy and provide effective means of combating these problems.

“We must as a collective, come together to look at every possible means of improving the situation that affects every family,” read the statement.

MCK chief Frank McComber was designated as the lead on the topic on behalf of the MCK, and said that the problem has existed for a long time, and unfortunately, it took the loss of human life to bring it back into focus.

“Kahnawa’kehró:non are frustrated and afraid. We share that frustration and fear, as we are all community members first, and each of us has been affected at one point or another,” said McComber.

“We should not fear taking new approaches, as it is clear that all of the good words and best intentions are not enough. We need to ensure that any additional assistance and resources they need are made available,” he continued.