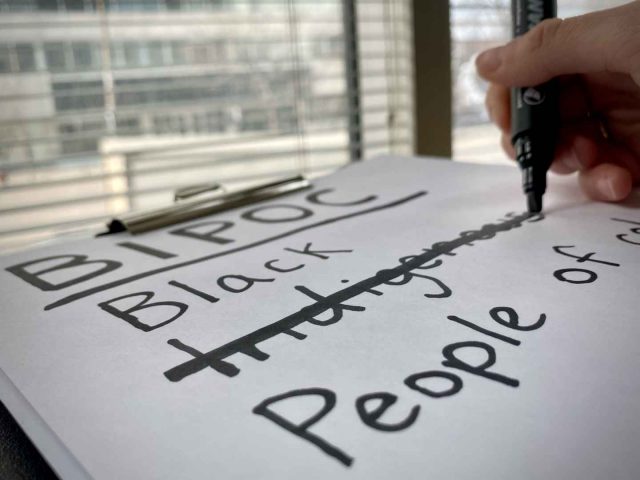 After facing public accusations of racism, tokenism and whitewashing, the Task Force on Equity, Diversity and Inclusion (EDI) at Bishop’s University (BU) is now left with an empty seat as their last Indigenous member gave her resignation last week.

Kanehsata’kehró:non Bishop’s student Kailey Karahkwinéhtha Nicholas made a public announcement in a press release on Tuesday, stating the University’s “failure to treat Indigenous members with respect and consideration” as one reason for her decision to step down.

The first-year student is one of the members of Bishop’s Indigenous Cultural Alliance (ICA) who organized a press conference at the end of last month, in conjunction with Montreal’s Centre for Research-Action on Race Relations (CRARR).

Throughout the week that preceded the meeting, students in the ICA shared detailed accounts of their every day experience as Indigenous Peoples on the campus and as members of groups working alongside BU’s administration.

The picture painted by the group is one layered with intimidation, systemic racism and an overwhelming lack of transparency.

In an official resigningment letter sent to Task Force chair Jenn Cianca, Nicholas wrote that another point of contention that motivated her withdrawal was Bishop’s negligence to be transparent about the University’s legal obligations, under Quebec’s Law 143 on systemic discrimination in employment.

“The nature of the Task Force, and a lot of discussions we were having as members, were on hiring more BIPOC representatives,” explained Nicholas. “Yet, through all my time there, I was never made aware of this law.”

According to the latest data from the Quebec Human Rights and Youth Rights Commission, out of Bishop’s 406 employees, only two identified as Indigenous.

The near-total absence of Indigenous staff on campus is behind the group’s request for the release of all employment equity data Bishop’s provided to the human rights commission.

Since its enforcement in 2001, the mandatory employment equity act, known as Law 143, has made it binding for all universities in the province to take the necessary measures to eliminate barriers to equitable representation for Indigenous peoples, women, people with disabilities and visible and ethnic minorities in all job categories.

“We are concerned that discussions on equity, diversity and inclusion left out the university’s legal requirements under Law 143,” said Fo Niemi, executive director of CRARR.

According to some ICA members, the Task Force would’ve deliberately misled students and staff about Bishop’s legal obligations on employment equity.

“Even the Task Force’s report released last month contained misleading information on hiring, recruitment and retention,” said Alliance co-lead and former vice-chair of the EDI force, Nikki Baribeau. “This is not truth and reconciliation, but lie and deception.”

The Cree woman from Mistissini was the first of now two Indigenous students to resign from the force in recent months. She stated being forced to resign after allegedly receiving “intimidating” emails from the force leadership accusing her of silencing other Black, Indigenous, People of Colour (BIPOC) voices, which led to the requesting of her departure.

The treatment Baribeau said she experienced, along with the circumstances sustained by other BIPOC people on campus is why Nicholas said ICA members issued seven demands to university officials, which are calling for concrete change at BU.

This hope for genuine progress is why the ICA stated that it calls on all racialized members of the force to resign; in solidarity with Indigenous students and “out of their common stand against systemic racism at the university.”

“Being a child of Kanehsatake, I’ve learnt about how land disputes and race functions since I was a kid,” said Nicholas. “My leaving the force is saying that on behalf of the ICA, we’re done being messed around with. We’re not interested in this shallow type of activism. It’s real change or nothing.”

The Eastern Door reached out to Bishop’s principal Michael Goldbloom and EDI Task Force chair Jenn Cianca for comment, but no response was provided in time for publication.

“At the end of the day we aren’t trying to get rid of the Task Force,” expressed Nicholas. “It’s about getting people to realize that if you don’t have BIPOC voices on an EDI Task Force, then it’s pointless.”