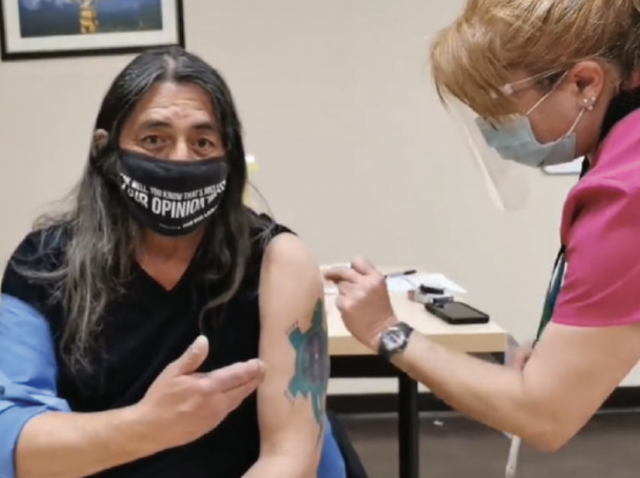 The first members started to receive their shots in the community

COURTESY FACEBOOK PAGE OF THE MOHAWK COUNCIL OF KANESATAKE

Not only did last weekend’s storm cover the town in snow, but it also brought along a fresh feeling of hopefulness.

Kanesatake started to administer the COVID-19 vaccines to its community members as the world approached the one-year mark of the pandemic. As of Tuesday, March 2, 150 Kanehsata’kehró:non were successfully vaccinated.

On February 26, Kanehsata’kehró:non Selena Etienne became the first elder to receive the Pfizer vaccine at the Tsi Teiontatshnié:tha, Kanesatake Health Centre (KHC). Etienne told her daughter Brenda that while she was apprehensive to take it at first, after she did a lot of reading on the subject and spoke to her daughters about it, and she was convinced. She said she now encourages everyone to get it.

A few hours after Etienne was vaccinated, the grand chief of Kanesatake, Serge Otsi Simon, proudly rolled up his sleeves to get his first dose.

“It was kind of last-minute, since I have a heart condition, I decided I should get the vaccine,” said Simon. “It was fine, no pain, no side effects, except a sore arm.”

According to KHC spokesperson Robert Bonspiel, Kanesatake only had 48 hours to set everything up, after receiving news from Quebec Public Health authorities that the vaccines were on their way.

Every single Riverside Elder’s Home resident, along with each health care worker and staff, were prioritized following the Quebec government’s priority list.

For the grand chief, this was the first step toward some kind of normalcy.

“It was the first little step we took from breaking that isolation we’ve been doing for a year,” he said.

The community had been impatiently waiting since Quebec’s vaccination campaign began last December. While Kanesatake’s sister community Kahnawake received vaccines as early as December 23, the Laurentides region was hit harder by delivery delays.

Simon is encouraged by the community’s response.

“There are a lot more people than the 150 we vaccinated that wanted it and that’s a good sign, despite all the misinformation out there,” said the grand chief. “It’s been difficult but when people realize what this is and the benefits of it, I think even those who are against or on the defence will come around.”

Bonspiel said that the next rollout would be happening in the upcoming weeks, although the KHC is expecting the Moderna vaccine for this second round. While the Pfizer vaccine needs to be administered two separate times for it to be fully effective, Kanesatake is currently choosing to focus on mass vaccination. The goal, explained Bonspiel, is to get all Kanehsata’kehró:non vaccinated once before scheduling a second dose.

“In the next few weeks, we intend to vaccinate as many people as possible, starting from people who are older and vulnerable and then going to less at-risk community members,” said Bonspiel.

As for lifting the measures, Bonspiel and the grand chief both said that it was too early. This being said, the conversation surrounding it is slowly making its way to the Mohawk Council of Kanesatake.

“We are not shutting down our effort just yet,” said Simon. “Only once the pandemic is declared over.”