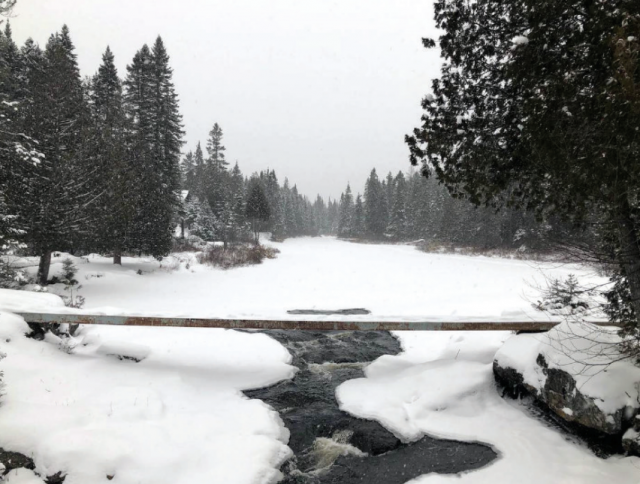 The Tioweró:ton Committee of the Mohawk Council of Kahnawake (MCK) sent out a press release on February 26 reminding community members that it is prohibited to profit in any way from the natural resources in the territory.

Additionally, they asked community members not to sell or give natural resources from the territory to non-locals.

Some of the natural resources highlighted in the release included wood and soil.

“We have had an issue with a non-local contractor that community members have been hiring,” said MCK and portfolio chief Gina Deer. “He has been coming into the territory, and he was taking some of the wood from different cabin areas,” she continued.

Many community members consider the Tioweró:ton territory as their home away from home. The territory is a hunting area spanning 18,375.8 acres, near the town of Ste. Lucie, in Northern Quebec.

Deer said that the contractor was using, milling and selling the wood.

The MCK started receiving complaints about the man roughly a year ago, according to Deer. “We have had some complaints about him utilizing his knowledge, going to certain areas of the territory and taking some top soil, which is very hard to find up in Tioweró:ton,” she said.

According to the MCK, there has been an increase in visitors to the area in recent years, and records show that there are between 300-400 visitors each summer weekend.

The chief explained that he had also begun advising community members to perform some construction work in which he would reap the benefits of the resources he was then removing.

According to Deer, when the contractor was confronted about his activities in the territory, he said that he was hired to mill the wood for residents.

“And it is just too many times that he has used that excuse that he was milling for somebody and they were going to get the wood back. Then we were told that he actually came in on a couple of occasions and took some wood without permission,” she explained.

The Tioweró:ton Committee sent the man a letter informing him that he would now have to speak with the caretaker before entering the territory. Moreover, he will be monitored at all times while he is in the territory and must also adhere to all the other policies.

“If he is not accompanied by somebody, he is not going to be allowed to stay because that is part of the rule. We all know that you are not supposed to be making money from the area,” she said.

She said that the contractor has been working in the area for many years and probably got a little too comfortable.

The Tioweró:ton Committee also stated that any fallen trees being removed from the territory for milling purposes must be confirmed with the caretaker when it leaves and when it returns.