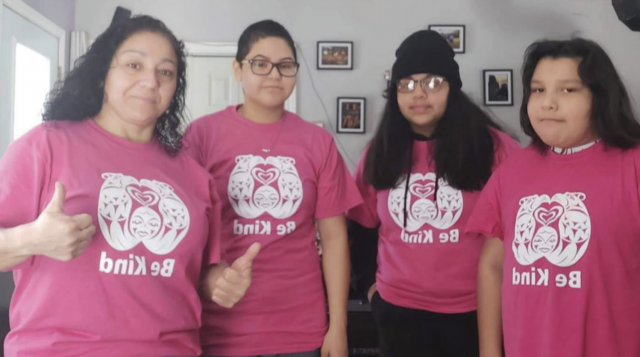 Lexi Fox, left, fell victim to bullying, and she has had a huge impact on the community. Her mother Suzanne Jacobs (pictured with Lexi’s siblings) hopes to change things in town.

Sometimes it’s whispered teasing that leaves us unsure of what we’ve heard, or name-calling and cruel jokes that were said “just for fun.”

Other times, it can look like something one has to endure to be part of the team or accepted, such as silent-treatment or incessant online harassment. Whatever form bullying takes, the victims’ wishes remain the same – that it would stop.

On February 24, Pink Shirt Day aimed to raise awareness and support those affected by bullying. The initiative was launched in 2007 after co-founder Travis Price and David Shepherd protested against a grade nine boy who was bullied in a small town in Nova Scotia for wearing a pink shirt.

From there, the movement took on an unexpected magnitude and has now reached more than 100 countries all over the world.

“I never imagined that it would take this proportion,” said Price. “To know that this shirt is now the international symbol of anti-bullying and that there’s hope out there is very motivating and honouring. It’s incredible to see how far this little shirt has gotten.”

The initiative is quite simple, but the message behind the act of wearing the rose coloured-shirt is deeply powerful. For the past 14 years, Price has heard thousands of stories shared by individuals from around the world who came forward on Pink Shirt Day. Be it through sharing their own experience or that of their children’s, they add insight into how bullying impacts their lives.

“No matter your race, the way you identify or your religion, the movement is for everyone,” said Price. “We never focused on any demographic specifically, but rather on the fact that we are in this together. And we all need to stand together to not be continuously impacted by it.”

While the movement stepped into the international stage, it also hit closer to home. Both Kanesatake and Kahnawake have been taking part in the initiative to start a dialogue about the impacts of bullying.

This year, Kahnawake Shakotiia’takehnhas Community Services (KSCS) released info-graphics to inform the community of the different ways bullying can manifest itself.

KSCS prevention worker for the Á:se Tahonatehiahróntie Teen Group, Karina Peterson, said that organizations and businesses in Kahnawake were invited to come up with their own initiatives, while still promoting the pink shirt.

“The conversation needs to start at home, but it also needs to be supported by the community,” she said. “If the whole community works together towards a common goal, we will create a safe environment for these conversations to happen.”

In Kanesatake, an hour away from Kahnawake, the Mohawk Council of Kanesatake (MCK) also invited community members to wear pink in support of Pink Shirt Day and post their photos on social media.

“This year’s theme is: lift each other up,” reads the MCK online statement. “It’s a simple but powerful message encouraging us to look beyond our differences and celebrate the things that make us unique.”

However, the unicity that derives from communities is sadly not taken into consideration when it comes to assessing bullying and its consequences.

While we know that bullying touches 38 percent of males and 30 percent of women in Canada according to latest surveys from Statistics Canada, detailed information regarding Onkwehón:we communities are still lacking. Peterson explained that raising awareness towards the issue becomes particularly important for these communities.

“Bullying is universally applicable, as it happens to everyone, all ages, genders, and in every social system around the world,” said Peterson. “As First Nations people, racism has led to bullying in all those aspects, and resulted in multigenerational trauma that we are still working hard to deal with.”

The few pieces of research that exist have shown that Onkwehón:we youth were increasingly at risk of bullying due to cultural discrimination and systemic inequalities. But as Price mentioned, the ramification of bullying transcends race, gender and age. Victims can end up suffering from loneliness, panic attacks and low self-esteem. While the consequences can lead to different levels of trauma, in some cases, it cuts even deeper.

Kahnawa’kehró:non Suzanne Jacobs lost her daughter, 15-year-old Lexi Fox, who took her own life in early January. Lexi was a victim of bullying.

“I wish I had a rewind button,” said Jacobs. “Bullying can happen to anyone at any time. It is so emotional and scars forever.” Jacobs recalled seeing her daughter going through bullying from elementary school to high school. Her little girl was among one in three adolescents who experienced bullying in school, according to the Canadian Institutes of Health Research, while it increased the risk of suicidal ideas.

“Bullying needs to stop,” said Jacobs. “The bully needs to realize what they are doing. How they are making the individual feel. Think before you hurt someone because your hurtful actions last a lifetime.”

In memory of Lexi, the Kahnawake Education Centre (KEC) purchased t-shirts for all students and dedicated this year’s Pink Shirt Day to the commemoration of the young girl.

“The Thunderbird was printed on each shirt and was chosen for its great strength and protection of our children,” read a KEC statement.

For Kanehsata’kehró:non Deborah Rennie, the head teacher at Rotiwennakehte Elementary School in Kanesatake, Pink Shirt Day is the perfect occasion to open the discussion with her younger students.

With 20 years of experience, Rennie noticed that at a certain age, there’s a need to address the awkward phase of learning how to properly make friends.

“Often, it’s not even bullying but it’s more a disagreement where the kid’s feelings got hurt,” said Rennie. “They have to understand the difference between bullying and arguments.

“Apologizing is a big part of it and owning up to what they did,” she continued.

Cyberbullying and the pandemic

The pandemic forced everyone to move their interaction online – which inevitably weaponized cyberbullying.

A recent report by L1GHT, which analyzed millions of websites during the pandemic, has shown an increase of online harassment up to 70 percent in just a matter of months.

“We noticed that online bullying rises with the ease of accessibility and the number of applications that have the disappearing function for conversations or posts,” said Peterson, addressing the situation in Kahnawake.

The pandemic might be recent, but cyberbullying was always something that was on the Pink Shirt Day radar. However, Price confirmed that this year has led them to pay more attention to this form of bullying as they witnessed that this is how not only children, but also professional workers experience it these days.

Price believes that the safety message promoted by Public Health officials, governments and educators regarding COVID-19 echoes the one behind the Pink Shirt Day.

And it’s all about protecting each other.

“We need to push to make sure we are all in this together and that our kids and our workplace feel safe,” said Price. “It’s up to every one of us to make sure the environments are safe.

“As important as this pandemic has been for us to come together, there’s been another pandemic that has been going on for too long, and that’s bullying,” he concluded.