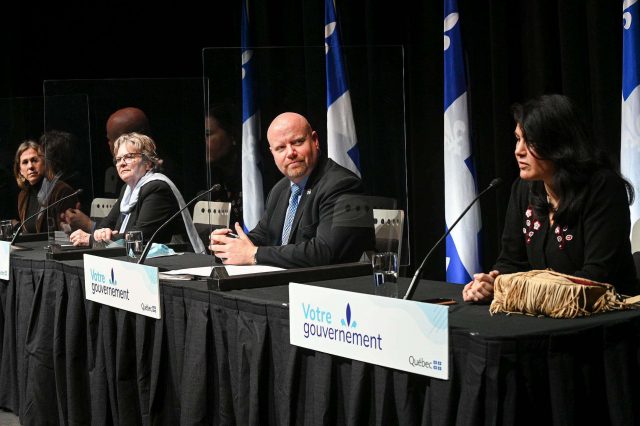 This was the second time that Ian Lafrenière and Nakuset sat down together at a press conference.

In an unprecedented move, the Quebec government announced the investment of $3 million to buy a permanent home for Resilience Montreal.

On Monday, February 22, Quebec Indigenous Affairs minister Ian Lafrenière revealed the new budget that was added to the $600,000 that was previously announced for the shelter last December.

“Clock is ticking,” said Lafrenière. “There was a sense of urgency to act.”

Resilience Montreal’s lease, a day shelter in downtown’s Cabot Square mainly geared toward Onkwehón:we people experiencing homelessness, was coming to an end. The co-manager, Nakuset, had been vocal about trying to find funding before March to secure the sale of a new building and to move to a permanent location.

The cascade of money left Nakuset truly overwhelmed. Nakuset said that in over 20 years of working in the field, she had never experienced this amount of help from the government.

“We are so lucky to have the city of Montreal, the Indigenous minister, the foundations, and the community members,” said Nakuset. “They all have really risen up and helped by delivering food and clothing, sort of saying that they are still acknowledging those who are homeless.”

In addition to Quebec’s funds, seven private foundations came together and donated $1.5 million to finance the operations of Resilience for the next three years. For Tasha Lackman, vice-president of philanthropy for the Foundation of Greater Montreal, one of the donors, this alliance was a true celebration.

“This is an extraordinary example of vision and collaboration that we hope will become the norm and a model,” said Lackman. “This is a real testament to the way we can get things done when we are working together.”

The funds come at a time where homelessness in Montreal has become a particularly critical issue. The recent death of Raphael “Napa” André, the Innu man from Matimekush-Lac John who was found frozen in a portable toilet near a closed shelter, prompted an outcry against the inactions of Quebec’s government in dealing with COVID-19 and people experiencing homelessness.

“These are issues that are deeply human, health and safety-related,” said the minister responsible for the Metropolis and the Montreal Region, Chantal Rouleau during the conference. “This is a problem that needed effort from all parties.”

For Rouleau, the coalition is the result of a situation where it was crucial to act quickly in order to prevent another tragedy. The minister said that by helping Resilience Montreal, they responded to the call for help from Onkwehón:we people experiencing homelessness.

While the amount represents a first, it mostly symbolizes home for those who are in the streets.

“Beyond providing a meal, a shower, a safe place to rest for people experiencing homelessness, Resilience Montreal is actually creating a community for those who are excluded from our society, a place where they feel safe. It is literally saving people’s lives every day,” said Lackman.

Details regarding the building remain confidential as the sale is not finalized.

Nakuset explained that the idea is now to consult with the people and volunteers who are already at Resilience Montreal to include them in the creation of the wellness centre. She said her intention is to make sure all Onkwehón:we communities feel like they are well-represented and at home at Resilience.

“With the displacement of Indigenous people, it always seems to be our fate that we go from one place to another and we never know exactly where our final stop is,” said Nakuset during the press conference. “Now we do.”