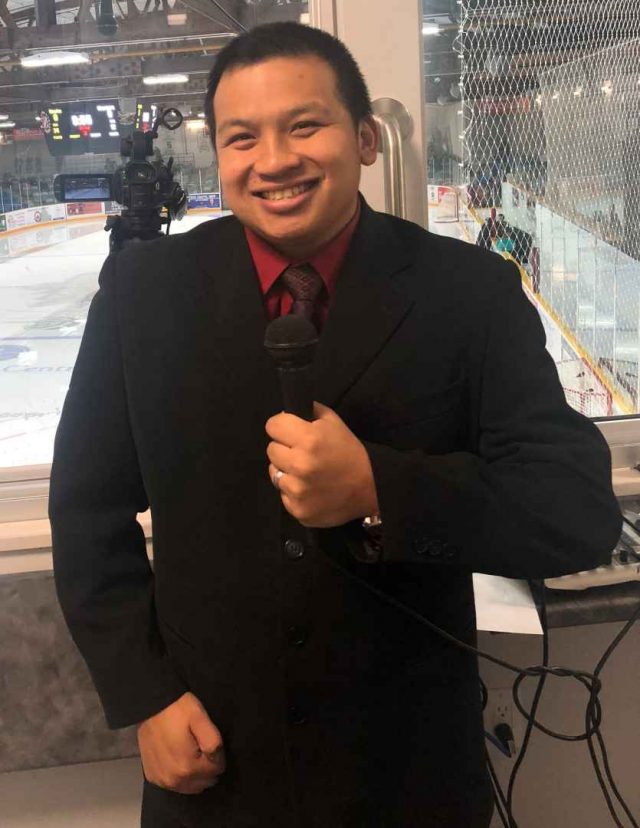 Since working for The Eastern Door, David Tuan Bui has broadcasted lacrosse for K103.7 FM and LacrosseTV. He has commented on events like the President’s Cup and The North American Invitational.

I love to speak and broadcast my voice, but writing this farewell piece had become more difficult than I imagined.

After this article is published, I will no longer be the weekly sportswriter for The Eastern Door (TED). I have accepted a position in my hometown of Peterborough, Ontario, where I will be an editor and writer for the social news media site PTBOCanada.

In May 2019, I graduated from both Trent University and Loyalist College with a double major in philosophy and journalism. Following that, I had a three-month gap of applying for work, from jobs such as rental vehicle manager, to car magazine writer. None of those jobs wanted to employ me, but editor of TED, Steve Bonspiel, did! In August of that year, he gave me a chance.

My relationship with Bonspiel has been nothing short of fantastic, both personally and professionally. We will retain a great friendship that will hopefully last forever.

Lacrosse is popular in my hometown, and my broadcasting career will keep me close to Indigenous athletes. I am confident I can continue to find stories in my backyard, to contribute to TED on occasion.

A few stories, including my first-ever article, about the 2019 World Lacrosse U19 Women’s Lacrosse Championship, have been from Peterborough.

My co-workers at TED are top-notch and have drastically improved my journalism skills. Their help gave me the confidence to accept my new position. I am forever grateful for what everyone at TED has done for me.

Before becoming the weekly sportswriter, I had no interest in lacrosse and had little education about Haudenosaunee culture. I have learned more about the Iroquois than any classroom has taught me. The Creator’s game is now embedded in me forever. It is all I see in my news feed, my social media.

My new boss was impressed with my lacrosse knowledge when he called up Bonspiel as a work reference.

“When we talked, the editor told me that he was impressed with how fast you picked up lacrosse,” said Kirtus Evoy, PTBOCanada owner.

My job was to bring Haudenosaunee sports stories to life for the rest of the Iroquois community. Everyone had a tale to tell. They were all open to sharing their stories with the rest of the world.

They shared their culture with me, an outsider. I’m a Vietnamese-Canadian with no relation to Indigenous people. I was brought into a welcoming community and came out feeling more enlightened.

This career at TED changed my life for the better. I learned more about Indigenous culture, travelled for several sporting events, met a whole new community and gained several broadcasting opportunities.

When I announced my new career on social media, several of my friends and family congratulated me. The kudos included many from whom I met through working at TED. Seeing that touched my heart.

I have family in Montreal so when I visit them, I will not hesitate to reach out to my friends in Kahnawake.

A big thank you to the Mohawk Nation for bringing me into their lives, allowing me to share their stories and supporting me throughout my career. I could not be where I am now without the Haudenosaunee’s help and I am thankful for everything.

In my final words, niá:wen Kahnawake for the memories, but they will not be the last.