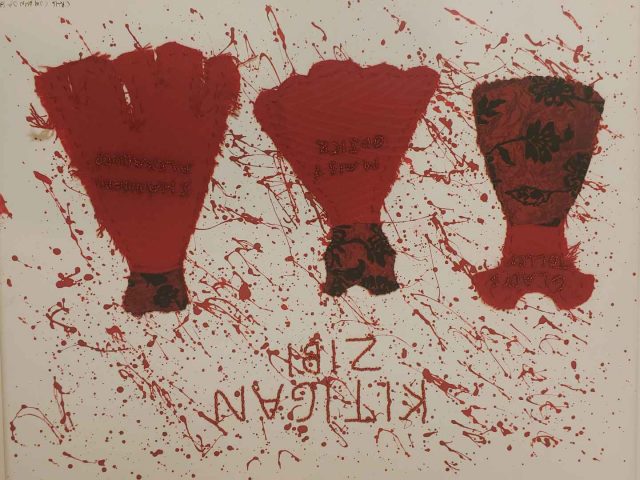 The piece is called “We Remember” by Anishinaabe artist Craig Commanda. The artist created the 20×16 canvas piece with paint, beads and fabrics in remembrance of the MMIWG of his community

Family members, friends, allies, activists and politicians came together to commemorate those that have been lost, but not forgotten.

This was also a call to action, denouncing the government’s ongoing inaction regarding the MMIWG crisis, as well as the larger issues surrounding systemic racism and discrimination against Indigenous peoples.

During the vigil, elders from across Canada spoke and shared their wisdom and stories of loved ones lost.

Elder Blu Waters, who is Cree from Saskatchewan, was the first one to speak. “We don’t want our loved ones to be forgotten, and this is why we do this,” she said.

In between speeches, images populated the screen of art made and submitted by Indigenous artists specifically to commemorate those lost, while music and drums played throughout the two-hour event.

Dayna Danger, the campaign lead for Missing Justice at the Centre for Gender Advocacy, has been helping organize the memorials for a few years now and explained that although the virtual aspect of the vigil brought on certain challenges, it also allowed for people from all over the country to come together online.

“Organizers said that the goal was to have the vigil accessible to everyone and bring everybody together,” said Danger, who is Metis and Saulteaux from Winnipeg.

The Missing Justice campaign is focused on raising awareness of the violence and discrimination against Indigenous women living in Quebec.

Viviane Michel, the president of Quebec Native Women from Maliotenam, said that the vigil was the very least that people could do to bring awareness to the issue of MMIWG.

The first-ever Women’s Memorial March was held on February 14, 1991, in Vancouver, in response to the murder of Cheryl Ann Joe, a 26-year-old Coast Salish woman.

“As a solidarity group, you can’t just look at the murdered and missing. You have to look at it systemically. We are fighting for homes, for wet shelters, or advocating for an Indigenous health centre that we have been waiting for,” said Danger.

The national inquiry into MMIWG was launched in September 2016. A final report was released in June 2019.

The report revealed that persistent and deliberate human and Indigenous rights violations and abuses are the root cause of Canada’s staggering rates of violence against Indigenous women, girls and 2SLGBTQQIA people.

“I don’t think the public has realized how much the violence has escalated on the streets since the pandemic started, because nobody sees it,” she continued.

The national inquiry made 231 calls for justice directed at governments and institutions, but the majority have been ignored.

Danger explained that their frontline workers are really feeling the effects of the pandemic and said that there had been suicides because they were just so overwhelmed.

“This year, we were really trying to bolster the message that we want action. How many more reports does it take? How much more government sanction inquiries do you need to understand the things that we have been saying for so long?” said Danger.

Ghislain Picard, the chief of the Assembly of First Nations Quebec-Labrador, also participated in the vigil and said that he was speaking on behalf of Adrienne Jerome, a chief from the Lac Simon Anishinaabe Nation.

“I think it is important that we come together on this day as we have and reflect on our sisters – this is their day for us to lift them up and remember the hardships that they have gone through,” said Picard.

Danger pointed to the calls to action for the Truth and Reconciliation Commission of Canada and the Viens Commission as examples of inaction by the government.

“It is a lot of stuff from the other side trying to reconcile all the hurt that they have done but what does it actually mean for the folks that are affected by it?” said Danger.

She also questioned Quebec premier Francois Legault’s refusal to grant curfew exemption for the homeless and called it “short-sighted” and a “total disconnect” with what is actually happening.

“It is very personal for us because Raphaël Napa André was a cousin of one of our volunteers. So, it really hit home, and we realize that MMIWG goes beyond just gender. It is our people,” she said.

André was a homeless man who froze to death on a cold January night during curfew hours.

The organizer called the whole situation surrounding the injustice and struggle of Indigenous people disheartening.

She said that we have answers and solutions and even the funding, but questions whether the government is going to cooperate in a way that actually helps Indigenous Peoples rather than stick Band-Aids on the issue.

“Those lived experiences have to be told, and people have to start taking action. The inquiry didn’t stop the national crisis. It didn’t stop society’s attitude towards Indigenous women as being disposable.

“We see the ways those stories are reported, and that is why the vigil is so important, because it gives us that space to memorialize and commemorate the loved ones that we have lost,” continued Danger.

Joyce Echaquan’s cousin Karine Echaquan also spoke and said that Joyce’s family was in Quebec for the vigil to commemorate her life. Echaquan died in a Quebec hospital after having been racially abused by the staff.

“Joyce would still be here if those nurses showed one ounce of empathy or consideration,” said Danger.