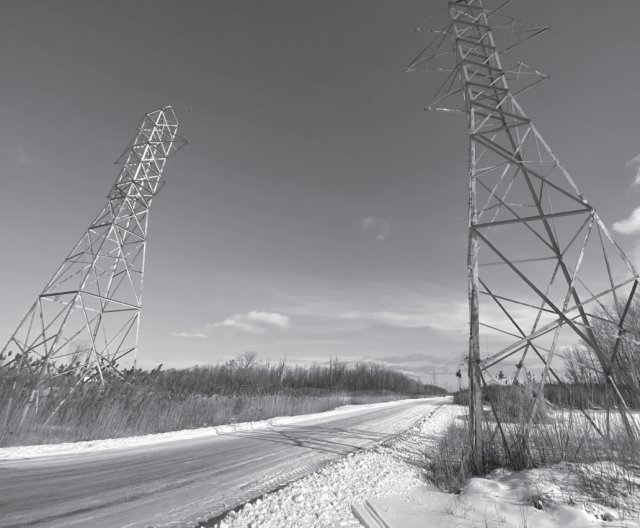 Last week, the Mohawk Council of Kahnawake (MCK) announced that the dismantling of the Hydro Line 2 project is moving full steam ahead, and most of the work that was planned for the winter has been completed.

“The progress of the work has been going pretty quickly, so that has been good,” said Patrick Ragaz, the general manager of Field Science at the Kahnawake Environment Protection Office (KEPO).

Ragaz said that fortunately, not many issues have arisen during the project, which for a project of this magnitude is quite rare.

“Hydro Quebec has been very responsive to things that have come up, and the local contractor, Rice Mohawk Landscaping, has been doing a great job.” he continued.

Ragaz explained most of the lines had been removed, and the work that was planned between Highway 132 and Route 207 has been completed.

However, a few towers remain on the other side of Highway 138 and will only be dismantled in the spring.

KEPO found a snake hibernaculum in the area, and will wait until the snakes come out in the spring to avoid disturbing their habitat and continue with the removal.

“So once the wildlife has left that area, they will take down the other towers and remove some of the contaminated soils,” said Ragaz.

The contaminated soil was identified underneath the towers and has been in the area since the 1930s.

Ragaz said that the towers were coated in zinc galvanized coating to prevent rusting, but that over time the zinc contaminated the soil.

“Using some interesting technology, they brought on a company that is able to sample the soil right on site, so that way we can determine the volume of soil that has to be removed. That is going quite well,” he said.

Once the contaminated soil has been removed, clean fill will be brought in, and a planting program will start in the fall to replant all of the trees that were cleared to access the area. As the towers on that side are 350 feet tall, workers needed to get a giant crane to gain access to the site, and to do so they had to clear a large path.

He further said that the point of completing the work in the winter was to minimize the impact on the land as much as possible, especially with all the heavy equipment that was necessary to do the job.

“There will be some on-going monitoring to make sure that everything is responding as expected – that will be the end of the work (in that specific area),” he said.

The restoration work behind Playground Poker was also finished, according to the MCK.

Over on the North Wall, workers did the prep work last week to begin removing the lines across the Seaway and the St. Lawrence River.

“You can imagine that it is a pretty complex operation, so that will be continuing for probably another week or so. And then from there, we are going to start taking down one of the towers,” said Ragaz.