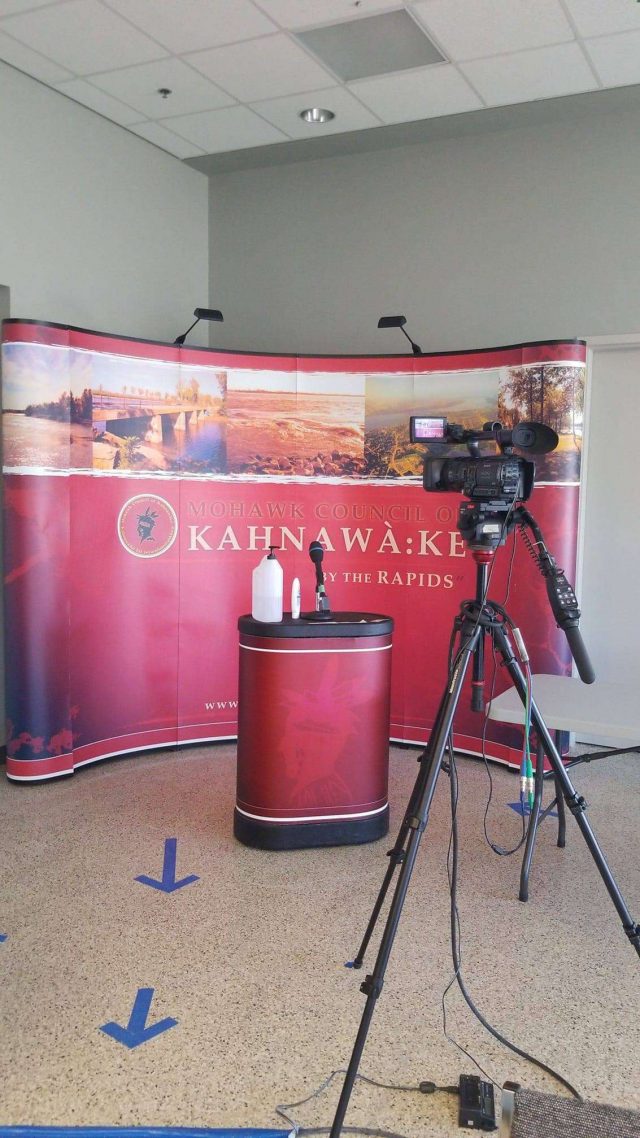 A growing number of people are looking up to Kahnawake and the community as a whole for its success in combating the spread of COVID-19.

A targeted closure of Kahnawake to non-residents during the first wave, the robust enforcement of directives for businesses and individuals, as well as a proactive course of action to create a COVID-19 Task Force and obtain a testing site, are all elements listed as part of Kahnawake’s much-coveted recipe for success.

Another factor to have proved indispensable, according to several local officials leading this fight against the virus, is the community’s collective effort.

“The biggest part of this success is truly that community spirit, which is still well and alive here,” said the Task Force chair and commissioner of Public Safety for the Mohawk Council of Kahnawake (MCK), Lloyd Phillips. “Kahnawake really is a community in the truest sense. We care about our neighbours, who’s down the road and so on.”

This community-driven undertaking has been yielding consecutively low numbers of infection, zero cases leading to hospitalization, and no COVID-related deaths in Kahnawake.

Although the community was largely successful at keeping one another safe from the virus, there was no degree of compliance to directives that could limit the mental strain felt by Kahnawa’kehró:non after 10 months of adjusting to living with fear.

It’s with this in mind that Phillips said the Task Force decided to ease restrictions during the holiday period, “in the spirit of mental wellness.”

The officials opted to allow for safe visitation between December 24 and 28. During the four-day period, community members were allowed to have one household visit per day, providing that safety measures such as proper distancing, hygiene and the wearing of masks were still in place.

Without losing sight of the imminent threat posed by the virus, community members were able to rejoice at the opportunity of spending a few days focusing on their mental and emotional health.

Albeit with the optimism of the overall well-being of community members, the end of the holiday season was expectedly met with an increase in the rate of positive cases, anticipated by Task Force members and health professionals.

On January 8, the Task Force announced that there were 20 active cases in Kahnawake – one of the highest active case counts to date in the community.

In an unexpected development, the lifting of Directive #54 prohibiting household visitation was announced on Tuesday and takes effect today (Friday).

Phillips said that this decision was reached as a direct result of the reduction of positive cases, which in a matter of weeks dropped to a single active case.

“Now that we feel we’re in a much better position than we were three weeks ago, and given that we understand that there is a lot of stress on individuals not being able to visit loved ones and friends, we figured at this point that the Task Force would allow again for one household visitation once a week,” Phillips explained.

The Task Force chair said that the visitation directive is dependent on residents respecting the safety measures still in force.

Something, he said, has been made possible with an emphasis being placed on direct communication with community members, sheer transparency and the relaying of practical information.

“That’s where a large part of the success lies, it’s within the community as a whole,” added Phillips.

This message is echoed by many, including executive director at the Kateri Memorial Hospital Centre (KMHC) Lisa Westaway, who said this triumph cannot be attributed to merely one individual or even agency.

“Community is not just the individuals, it’s also organizations which are made up of individuals from the community. Everyone is working towards a common goal,” said Westaway.

Virologist and family doctor Annick Gauthier said she also wished to shine light on the collective effort of Kahnawake’s workers and residents. Gauthier has worked alongside KMHC staff and the Task Force since March of last year, and she has notably contributed by lending her expertise and helping create protocols for the community.

She was the subject of an article published last week in the Canadian Press, and although she was happy and encouraged by their kind and flattering words, she would like to emphasize the tireless work of all the incredible people around her.

“The Task Force, the health, social service and essential workers and all Kanien’kehá:ka who came together in spirit to protect each other,” she listed, as she expressed that she could not have done it without their resilience.

Measures that have successfully kept the community afloat amid the pandemic have often differed from the ones implemented by the administration of Quebec premier Legault. For instance, the province-wide curfew that has been in effect as of January 9 does not apply to Kahnawake as the community is out of their jurisdiction.

Westaway, who is also a member of the Task Force, explained that although the numbers and directives issued outside of Kahnawake are factored into their decision-making process, other elements and further research is also taken into account.

“Throughout the pandemic we would do a lot of research on different strategies, especially with the reopening of businesses, schools, and for mental health strategies,” said the KMHC director. “Some of the strategies that we use comes from research that we’ve done in other countries versus in Quebec.”

She cites that Sweden and the United Kingdom are namely two countries the Task Force studied when preparing for the safe reopening of businesses set to take place on Monday, February 1.

Kahnawake has had its own directives to counter the virus since the beginning of the pandemic. This autonomy in decision-making has played a significant role, according to Westaway.

“The fact that we are able to be independent and make our own decisions and choices that are different from what Quebec is doing is part of the elements contributing to the success of the community,” said Westaway.

The relentless work of individuals at large is undeniably dependent on the work put forth by local health professionals and the Task Force, which serves to guide community members.

Putting aside the pride and honour of leading these efforts, Westaway confessed that this responsibility nevertheless weighs heavy on the shoulders of everyone involved in these decisions.

“We have a lot of trust placed in us,” she said, with a heavy heart. “People trust us to make the right decisions for their safety.”

Westaway is continuously amazed by the power of the community.

“That emotion, the genuineness, is also what is really important in allowing us to be trusted and to do what we do. That humanness is part of it,” she said.