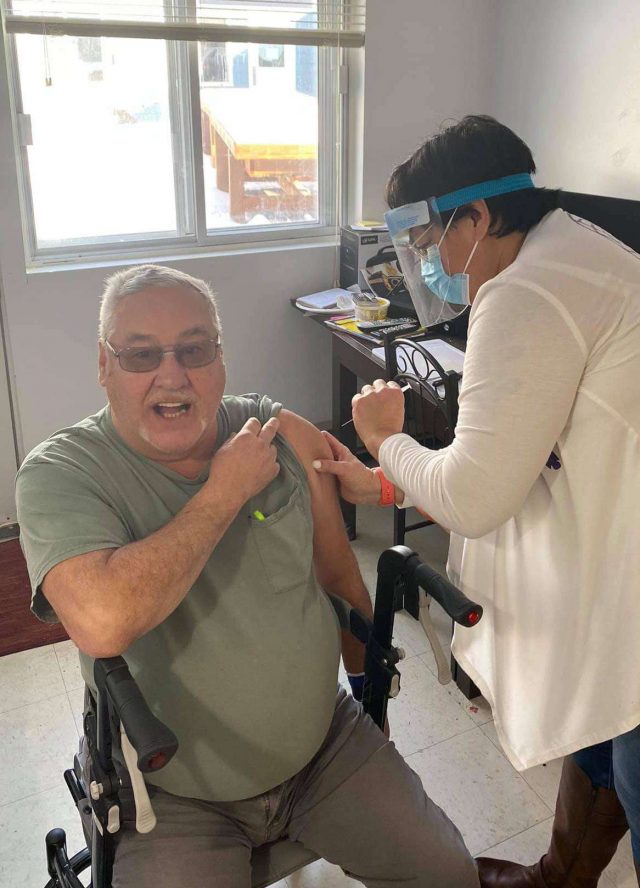 Turtle Bay Elders’ Lodge residents received their first dose of the vaccine on January 5. KMHC executive director Lisa Westaway said they are waiting on the Ministry of Health to confirm when the anticipated second dose will arrive.

After over three weeks of isolation and an alarming “weak” positive result that turned out to be negative, the quarantine period at the Turtle Bay Elders’ Lodge (TBEL) was finally lifted on Wednesday.

The Kahnawake COVID-19 Task Force announced the reassuring news in a communiqué released later in the day on January 20, which also confirmed the vaccination of residents at the Independent Living Centre (ILC).

In place since New Year’s Eve, the isolation period at TBEL was carried out after an outbreak was declared when two staff members had been infected.

An elder living in the facility, Kahnawa’kehró:non Louise Hemlock, is frustrated with how little information she and other residents at the lodge received about the situation.

“They (staff members) don’t tell us anything because they don’t know either,” said Hemlock.

She explained her exasperation has been amplified by the boredom isolation has dawned upon her in recent weeks. “Let’s put it this way, it just hasn’t been fun,” said the 88-year-old woman. “We’re just like kids, we have to entertain ourselves. So I’ve read until I’m cross-eyed.”

TBEL resident Wallace Snow shared a similar sentiment. “You want to get out and you can’t, even if you want to just walk around,” said Snow. “Staying in your room gets to you after a while.”

The 71-year-old said he has kept his mind occupied by watching TV, reading books, doing puzzles and speaking on the phone with family members.

However challenging the isolation period was for residents, it’s the two positive cases and last week’s ensuing false alarm over a positive result that raised concern for both the elders.

“We (residents) get close to one another and when I heard that it was two cases I thought ‘my God, who could it be?” said Hemlock.

According to the executive director at the Kateri Memorial Hospital Centre (KMHC), Lisa Westaway, there were no high risk contacts identified in connection with the staff members who tested positive during the holidays.

Westaway explained that as an outbreak, there nevertheless had to be additional measures enforced, including isolation among others.

“In the case of an outbreak, the policy and procedure is that you screen all employees and all residents every five days, three times,” explained the hospital executive director. “That was done at the Elders’ Lodge.”

The executive director clarified that all of the employees at TBEL have been undergoing weekly screening for the virus and that this process began even prior to the outbreak. Westaway said this procedure is enforced whether or not symptoms are detected.

“A screen is like a COVID test, but you call it a screen when you do it for someone who doesn’t have any symptoms,” she said. “It’s a preventative measure as opposed to a diagnostic.”

The positive test result of an elder at TBEL on January 13 caused heightened levels of worry among some residents who were left in the dark about the person’s identity.

According to Westaway, the positive result in question was immediately recognized as a weak positive. She explained that infectious samples are identified by a visible marker which, if only mildly altered during lab analysis, could signal a weak result.

“If it’s a very very mild change, that’s called a weak positive, and it could mean one of three things,” said Westaway.

First, there is the possibility of someone having had COVID who is no longer contagious, but is still shedding the virus. The second explanation for the result applies to someone who is at the very beginning of their infection. This person won’t present any symptoms but the virus is still identifiable through a test that detects antigens.

“That’s why we’re screening our employees once a week so that we can catch those weak positives before they actually have a chance to develop enough symptoms to be contagious,” said Westaway.

The final explanation is cross contamination with a sample that is positive.

“Public health recommendations when you get a weak positive is to re-test the patient 24 to 48 hours later,” explained Westaway. “And then the result of the second test is really what gives you the information you need.”

Sure enough, in this case, the result of the second sample from the resident who tested weak positive came out negative.

The KMHC director said that regular client assessments at TBEL is one of the ways in which the residence has had success with keeping out the virus.

“There’s a full health assessment that’s done by the nurse every single day and temperature twice a day during the case of an outbreak,” said Westaway, adding that the assessments happen as a daily occurrence since COVID.

Robin Guyer, manager of long-term care (LTC) at KMHC, said that one of the challenges with assessing the health of senior patients is that they don’t always have the same immune responses as a typical younger adult would.

She said that the health assessment goes through vital signs, which includes getting the temperature and blood pressure of residents, as well as listening to how their lungs sound. “Because sometimes you won’t necessarily have a spike in the temperature but there might be something going on that you can only get from a more in-depth assessment,” explained Guyer.

The LTC manager explained that an elderly person might only see their temperature go up by one degree or not even go up at all. “This is because they have different immune responses compared to the younger population,” she added.

Westaway said that 89 percent of residents at TBEL received their first dose of the vaccine on January 5 and that KMHC is still waiting for the Ministry to confirm when the second dose will arrive.

In the meantime, Hemlock and Snow are both excited to leave their room and see the other residents again.

“We always look after one another,” said Hemlock. “You become family.”